Life got in the way again over the last two weeks and I haven’t found as much time to drawas I’d like. It would be very nice if I didn’t have to earn a living and could just sit arounddrawing all day.

I did get down to the Cafe Nero againyesterday though, whichturned out to be a pretty good trip, maybe because I had my new boots on.

I’m getting to know the regulars now, in fact it looks like I’m becoming one myself. This bloke on theleft I’ve drawn before, exactly a month ago. I don’tknow why, but it makes me slightly uncomfortable that other regulars will also be getting to know me, andmight have seen me drawing. I guess I just want to stay kind of incognito. Part of what I loveabout doing these drawings is being able to observe people without them knowing it and trying to catch amoment from their lives. It’s a bitvoyeuristic I suppose, but I like to catch people in as natural poses as I can. I think it makes the drawingsmore recognisable in a way, and gives them an edge of reality maybe. At least it will if I ever get any goodat them.

Here’s another regular who I’ve drawn before, although the last time I drew him it came out better than this one.Oddly enough,I last drew him a month ago too, on the same trip that I drew the last guy for the first time.

It struck me that this might actually be a good thing. If I can get a few goes at the same person, I shouldhave a better chance of getting a good likeness of them eventually. At least it’ll be interesting to see a seriesof drawings of the same person together. 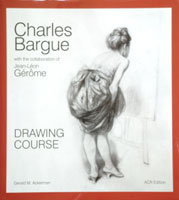 This book is a series of drawings from casts, old master copies and life drawings by Charles Bargue, intendedfor use in the Ecole des Beaux Arts in Paris in the late 19th century as a teaching tool. Students were supposedto copy the plates as accurately as possible, and the plates have become popular again in modern ateliers modelledon the old tradition, despite being almost forgotten for many years.

As well as being a beautiful book full of quality copies of beautiful drawings, the book raises someinteresting questions for me about how the 19th century atelier teaching tradition relates to the present day.Part of the point of the original publication of the plates was apparently to educate 19th century students ofthe arts in Paris about what constituted ‘good taste’, which basically meant classicism. But around the time oftheir publication, a realist movement was developing in Paris which reacted against the idealised forms of Greekand Roman sculpture and wanted to depict a more realistic version of nature.

I think impressionism may have grownout of this to some extent, since it was directly influenced by Manet, who’s paintings often ditched theclassic modelling of form in chiaroscuro (basically tone) in favour of a depiction of things closer to the waywe actually see them. Impressionism was concerned with the effects of colour in the real world, withcatching the fleeting effects of light and with theories of optical perception, a different version of realitywhich again was supposed to be closer to what we really see and the way that we see it than the then dominantclassical history painting was perceived to be.

How we got from there to an unmade bed and some vodka bottles in a gallery I’m not entirely sure, but the cult ofself expression in painting which came in after the impressionists has a lot to do with it.

Regardless, I’ve got hold of this book to copy the drawings. This is a quite rigorous form of practice whichI expect to pay off in terms of the quality of my drawing and my knowledge of proportions. I do, after all, wantto paint realistic, or representational, pictures. I also have a feeling though that if I copy enough ofthese drawings I’ll internalise some of the classical/realist style of the late 19th century. Whether that’ssomething I’m happy about or not I’ll have to wait and see.

The fact remains, though, that this is a drawing course put together by someone who can really draw. The platesincrease in difficulty as you work through the book, and there are a few notes of advice on how to go about copyingthem. This is waytougher than anything I ever came across at art college, which is precisely what I’m looking for.

So far I’m half way through the first plate, which has twelve simplified drawings of eyes from casts to copy. Thedrawings get a lot more complex than this, but already I’m finding it to be a challenge. In fact I would say thatafter my first twelve eyes, I’m already handling charcoal with more sensitivity than I was before. And there’s stillanother 180 odd plates to go. Of course being a touch obsessive I couldn’t just copy one or two, I’ve got to make a newseries out of it before I’ve even finished the last lot. I do get ahead of myself sometimes. I can’t help it though,I’m exited to have got hold of a copy of these plates, I’ve been reading about them for a while and I expect workingfrom them to have a direct and positive effect on my drawing skills.