First drawings for the new month, it’s now my third month drawing in the cafe, this was my eleventh trip.

Spring was in the air when I was walking down to the cafe, the first proper spring day this year. It had justrained but the sun had come out, a lovely, fresh morning. I got a copy of the big issue on the way down off thebloke outside the Ashley Centre, he always looks cheerful but he looked especially happy that morning. Maybe becauseit wasn’t as bloody cold as it’s been lately. 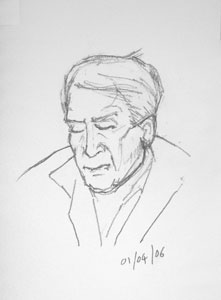 First drawing, pretty awful. For some reason I didn’t mind though, maybe because I was in such a good mood. Iwas quite happy to use this one just as a warm up and even though it’s terrible I did enjoy doing it.

He was right over the other side of the cafe from me, quite a distance away, but thankfully I got a nice table atthe front of the cafe this trip so I could see him fairly clearly.

Actually, even though this drawing is so bad, I quite like it, it makes me smile. It doesn’t look like him, andit’s one of the worstdrawings I’ve done so far, but still I like it. I think it might be because I get far too wound up about whetheror not I produce decent drawings sometimes. This one is crap, I know it, but I enjoyed doing it anyway. I think that’s why Ilike it. Also I like to put drawings like this up, because it shows that everyone produces total rubbish sometimes.Well, I do that a lot, but not usually this bad. One of the things I don’t like about portfolio sites is thatpeople put up their best work, and only their best. I think it’s a healthy thing to show that you’re not afraid tofail sometimes, everybody does. If all I put up here were my best drawings, then even I would feel bad about myoff days. 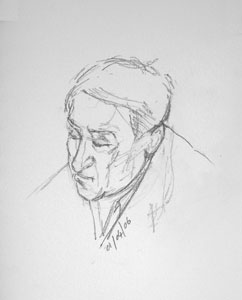 This is the same bloke, although you wouldn’t know it to look at it. Or would you?

It was still quite early atthis point and there weren’t many people to draw, so I thought I may as do white hair guy again. It stilldoesn’t look much like him, doesn’t really remind me of him, but there’s something I like about the angle of hisface. Although I didn’t fill in the tones I did put in the lines down his forehead and the side of face where theshadows started, it helps to give his head a bit more form. I think I may have got that from theBargue drawings,although I haven’t got that far through the plates yet. Some of the later plates use lines to show where the formturns away from the light, without actually filling in the tone blocks. 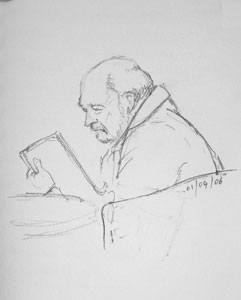 Third drawing, this one came out fairly well I think. Michelle said she thought this one looked a bit hesitant, andI know what she means, but I don’t mind because I think it was right for him. Not that he looked hesitant, but he wassitting on his own, very quiet, just concentrating on his paper and seemingly unaware of everyone around him.

I caught him pretty well, so I’m happy with this one. I can still see him as clear as day when I look at this.

I was beginning to realise at this point that there was something different about the drawings today. Gradually,as these drawings progress with each trip, I notice that my line has been getting stronger, clearer, and moredefinite.This time the lines became more scrappy again, not as strong. But I’m not sure that’s a bad thing, because thiswas one of my better days I think. Although the drawing is less – what’s the word? confident? No, not right. Lessdefinite anyway, more sketchy – despite that, the drawings seemed to be more human somehow, more honest, and more concernedwith the person and catching something about them than producing a good drawing for it’s own sake. I have no idea whythat happened on this day, or whether it’ll be the same the next time I go, but I’m pretty comfortable with it. Andalthough the lines are sometimes weaker than they’ve been lately, they’re also better placed a lot of the time in thisbunch of drawings. 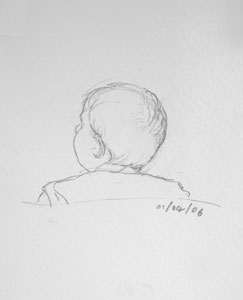 This is the first appearance of a kid in these drawings. I often see children I’d really like to draw, butusually they’re bouncing around too much. This little feller was held in rapture by some tall cranes on a buildingsite over the way. Every so often he’d turn round to his mum and point at the cranes, then turn back and stare atthem again.

I’m happy to have finally got a drawing of a little kid, usually I draw older people simply because they tend to bemore still, and also because people who look like they’ve lived are interesting to draw.

In an odd way, I seem to get close to people by drawing them, like they become my friends. I think that’swhy I give them names sometimes, I feel like I know them after I’ve drawn them. When I see people come in who I’vedrawn before on earlier trips, I feel like getting up and saying hello, and showing them the drawing I didof them before. I catch myself smiling at them sometimes. It kind of makes me feel at home in the cafe to seepeople around me who I’ve got in my sketch pad. They’d probably just think I was some oddball crazy guy if I wentup and spoke to them though. “There’s that care in the community bloke again with his sketch pad, let’s gosomewhere else.” Better to keep quiet I think. 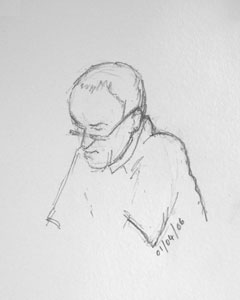 Fifth drawing, I’m quite happy with this one, although he was moving around too much to get a really good drawing of him. I endedup getting his head a bit too big for his body I think, but he was tall and thin. He had huge long arms,and his body would have made more sense if I could have got them in, but he couldn’t keep them still for fiveseconds it seemed.

He took over white hair guy’s seat after he left, so was quite a way away from me. The cafe was getting busyby this time, so people kept obstructing my view. It’s very frustrating when that happens, but it can’t be helped. 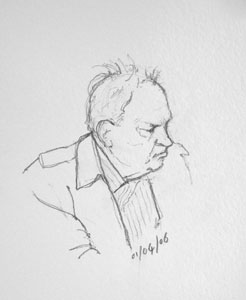 Last drawing for this trip, I was pleased to get this one. I’ve seen this bloke a few times now too, but never hada chance to draw him. He’s a bigbulky guy with broad shoulders and a very ruddy face, and his hair is always sticking up like that. He looks a bitdown in the mouth in this drawing, but he was just listening to his friend. He’s actually quite a happy lookingperson who chats and smiles a lot. I call him Winston, he looks like a slightly unkempt Winston Churchill, orPatrick Moore.

I got rumbled by a woman sitting on the table next to me when I was doing this drawing, it’s the first timeI’ve shown someone one of my drawings in the cafe. Sometimes I’ve noticed people craning over to get a peek whileI’m drawing,or when I go to get another coffee and leave my pad on the table, but I’d already exchanged a couple of sentenceswith this woman when she came in and sat down, so the ice had been broken anyway. She was trying to work out who Iwas drawing, was obviously curious, so I thought it couldn’t hurt to show her the drawing. Happily, she said shethought it was quite good. She might just have been being polite though.

Today was one of the better trips, perhaps the best one so far. The drawings have changed a bit, and are maybe a bitless strongly drawn, but do think I caught some of the people better than usual. I do seem to be identifying with mysitters a bit more, I think it helps me to draw them in a way. It’s like the drawings are becoming quick littleportraits instead of just drawings of anonymous people. I don’t know if that comes across in the drawings or not,but that’s how I feel about this batch. We’ll see what happens next time. I know now it’s no use trying to go foranything in particular in these drawings, they just come out the way they come out and seem to have a life of theirown.