It’s been almost a month since I went down the local cafe to draw. Thelast trip didn’tgo well, I couldn’t settle and did some pretty awful drawings. The proportions were out,I couldn’t seem to find anyone who sat still long enough to be drawn, and I left in a fitof pique after a few hasty sketches.

I was beginning to think that I’d had enough of drawing on the cafe. I wanted to workfrom some proper poses, where the person would sit still long enough to give me a chance to do a decentjob of drawing them. People in the cafe move about too much, other people get in the way or they leavebefore I’ve had a chance to get even the basics down. I think I knew at the time thoughthat the real problem was a bit closer to home.

I guess it’s understandable that I should get frustrated sometimes, I think I know what waswinding me up. Sometimes I feel the last ten years away from the easel more keenly, I feel desperateto catch up for the lost time, desperate to progress as fast as I can. But in my heart I know thatcan’t be done. Slow, steady progress is the only way. There areno short cuts.

So today I started the new month by getting my grumpy self back down to the cafe, sketchbookin hand, ready to give it another go. I’ve missed drawing in the cafe. There’s something about itthat draws me closer to people, and at the same time closer to what I want to be doing more thananything else -pictures of people. Maybe I just needed a break.

Today I was feeling fresh and relaxed, it was good to be back. Off the bat I decided to approachthe drawings differently this time. I wasn’t going to bother about the quality, for a start.These are just quick sketches, they were never meant to be portraits. Also, I was only going to draw heads.If I had time to get a bit of shoulder in, then all well and good, but only if there was time.

Yes, it can be hard to drawpeople that shift about, but it really doesn’t matter if I don’t produce one decent drawing from a trip.As long as I get to exercise my eye, then I’ve done the job. Sometimes I forget that, and I try to pushtoo hard. The frustration I sometimes feel just means that I’ve let doubt get the better of me, doubtthat I was away from it too long, and now it’s too late to get it back. But it’s never really too late.After a month of mainly painting still lifes in my little back room, I could feel the excitement of beingout in the world, drawing life as it passed me by, and I remembered why I started doing these drawings inthe first place. 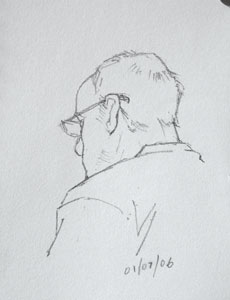 So here’s the first drawing from today. He was sitting close, one table away from me, reading his paper.People reading are always good cafe subjects, they tend to be a bit more stationary than someone who’sgassing away to their friends.

First drawing is always just a warm up, and this one didn’t come out too bad. The likeness isn’t good,but today I’m not in the least concerned about that. It just felt so good to be drawing someone again, tobe trying to catch a little moment from their lives in my sketch pad. Cafe sketching really is the realthing.

I approached this one pretty much the same as previous ones, starting by getting the angle of hisglasses in, then working round his head from there. The line quality looks similar to my last fewbatches, quite heavy and angular, not very sensitive. I was thinking as I was doing this drawing about theBargue approach to drawing, workingfrom the general to the specific – main shapes first, details afterwards. I didn’t do that here, so Iresolved to do it on the next one. 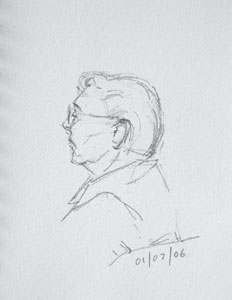 Which I did, now this is more like it. For this drawing I started by roughing in the shape of thiswoman’s head, and placing the line of her collar in relation to that main shape.

Approaching it like that has resulted in a scruffier, more scrappy – more sketchy– drawing, but then these are cafe sketches. It’s also resulted in much betterproportions, and funnily enough, the likeness is not that bad. Darker accents went in where darkeraccents were – her eyebrow, her mouth and her ear, not just one thick, heavy line.

I’m much happierwith this one. I like the way her eye came out. I remember thinking that it worked as I put it in, but it tookalmost no effort. I think it’s simply because it’s in the right place, since I’d already got the shapeof her head in by then. Getting the main shape of her head something like right first meant that thedetails took very little time to put in, and looked right on the first go. It actually made for afaster drawing too. 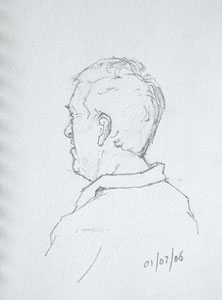 Last drawing for today. I drew this guy through the window, it was a nice day and he was sittingoutside, squinting against the sun. I like drawing people from this three-quarter, from behind angle,mainly because there’svery little chance that they’ll know I’m drawing them. It was starting to annoy me before that mysketchpad was filling up with people drawn from this angle, but I was enjoying myself toomuch today to let a small detail like that bother me.

This one was approached like the last one, starting first with the general shape of his head.As I went through the drawing, I had to revise the shape a bit, mainly because when his profilestarted to go in I drew it a bit too big. That’s quite a common thing I think, drawing too big.I read somewhere recently that Sargent used to paint his portraits slightly smaller than life size,to counteract the effect. Well if it happened to Sargent, I’m certainly not going to feel badabout it.

Although I think the distance from his profile to the back of his head is a bit too short, Ithink overall this one didn’t come out too badly. I was thinking as I was drawing him what goodpractice this is for when I come to do portraits, which I intend to eventually. Assuming I approach thedrawings in the right way, working from the general to the specific.

I think that’s one of those general guiding principals that has relevancy no matter what I’mdoing – drawing portraits, sketching in the cafe or painting flowers and fruit. I’m going to tryand keep it in mind more. Mostly I’m just happy I was back in the cafe today, watching life going onaround me and catching small moments from it in my sketch pad.