After coming home despondent fromyesterdays trip, with only twodrawings completed, Michelle persuaded me that I should go down again this morning. Since she’s usuallyright about pretty much everything, I did.

I’d say today went slightly better than yesterday. I consciously told myself not to get too tied upabout it and just bang out some drawings. Although nothing really good came out of today, I did produce one I’mquite happy with and more importantly, I enjoyed myself. On to the drawings: 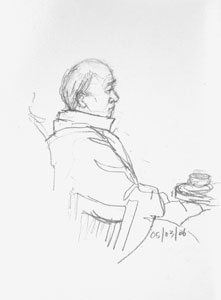 Not a great drawing this one. I rushed it, but it was kind of deliberate since I wanted to get warmed upwithout being too concerned about whether the first drawing was a good one. The forms don’t read well,the line is out of control, the head is out of proportion and it looks nothing like him. Mission accomplished.

Michelle tells me that even though not all the drawings I’m doing are good, they are getting gradually better. Shereckons that the faces have more character to them than they did when I started, which is one of the goals ofthese trips. She always knows when to say something nice.

This is quite an interesting one I think. Although it’s not a good drawing, in fact it’s a rubbish drawing, it isa pretty good likeness. I can remember her clearly when I look at this drawing (although it was just this morning Idid it so perhaps I’d better not pat myself on the back too much about that).

I think I did catch something of her character. She had a slightly superior air about her and looked likethe kind of person you wouldn’t want to cross swords with.

Again I was deliberately trying not to produce a good drawing. That may sound a bit odd, but sometimes I think youhave to force yourself not to try too hard, I do anyway. 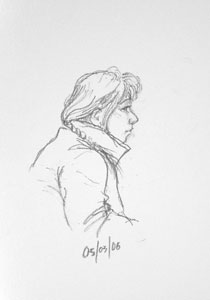 This is my favourite from today. She was full of life, deep in conversation and jigging about a fair bit,but she had aquite distinctive look about her which made her easier to draw. Also I liked her, she looked happy and like she’d begood fun to be around, I think it helps sometimes if there’s something you like about the person you’re drawing.

The farmer’s market was on this morning, (first Sunday of the month,) and I’d hazard a guess that she was somethingto do with one of the stalls, judging by her healthy outdoors look, and the ruddy complexions of her friends.What initially attracted me to drawing her was her hair and her profile, which came out fairly well. This is areasonable likeness I think. Even after I’d finished this drawing and started the next one,(which didn’t come off,) I came back a couple of timesto make corrections to her profile. She was in the cafe for quite a while so I was lucky enough to have the chanceto do that. It struck me that it might be an idea to have a couple of these on the go at once, so if somebody moves orsomebody else gets in my line of sight, I don’t have to stop and wait. 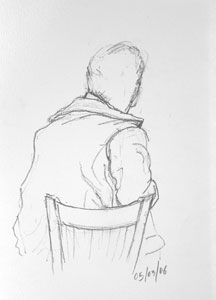 Last one from today. I must admit I got a bit thrown with this one, because he was sitting close to me and his wifenoticed I was drawing him. I kept expecting her to poke him and tell him so, which I was dreading because then hewould move out of position and the drawing would be over. As it happened, he moved anyway, and I drew much of thisfrom a combination of memory and hints from the position he was then sitting in. Not ideal.

I wanted to get something of the twist of his body, and to get a feeling of the weight on his right arm against thechar back, neither of which really came off. His back came out ok but I didn’t get his right arm done before he moved,and he was moving his head around too much to really get the form convincingly. Pity, it could have been a nice drawingif I’d done a better job of it.

Today was a good one I think, much better than yesterday. Although they’re not the best drawings I’ve done, I didloosen up compared to yesterday, which was my main aim. Seeing progress in your work can get a bit addictive,but it has to be accepted that it won’t always be the case, at least not to a perceptible degree. The important thingis just to keep working, good or bad, then progress will take care of itself.