Back to my usual haunt for this trip, a big improvement from wobbling trains and darkenedtheatres. 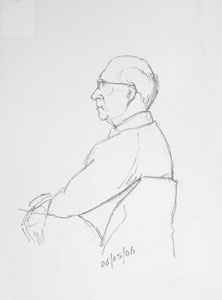 This guy is a semi-regular, I don’t see him every weekend but I have drawn him once before.I think I got a better likeness of him last time.

I’ve a feeling I shortened his arm in order to fit them on the page here, his arms justlook a little squashed in to me now. But I’ve done much worse than this before for a firstdrawing of the day. 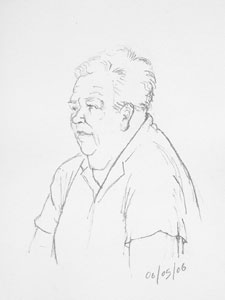 This bloke was sitting at one of the tables outside, so I drew him through the window. He wassuch an interesting shape I though he’d be good to draw, but I don’t think I caught himthat well. This is one of those drawings where the details look right taken separately, butdon’t really work together. It’s enough of a caricature for you to be able to recognisehim from this drawing, but that’s not what I’m going for.

Still, I quite like the drawing, it does catch something about him and I like his face. 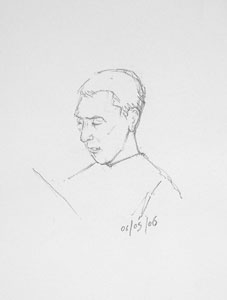 The is an odd one, I’m not sure how I feel about it. It looks like an ok drawing, but Iknow it looks absolutely nothing like the guy I was drawing. They’re both thin, that’sabout it.

It looks so little like him that I can’t get a picture of him in my mind at all from thisdrawing. If a drawing is reasonably close, I can usually picture the person I was drawingpretty closely. I guess that’s because I must have observed them pretty closely and with atleast some accuracy in order to get a decent drawing of them. 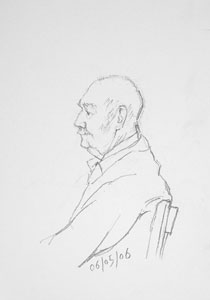 This is different, it’s actually a pretty good likeness. I don’t know what it is aboutpeople who are getting on a bit, but they’re very interesting to draw.

He was sitting just a couple of tables away so I had a good view of him. I’ve seen him inthe cafe a few times but this was the first time he was in a good position for drawing. Hedefinitely realised I was drawing him, but he didn’t seem that concerned. I thought aboutgiving him more hair and making him look a bit younger just in case he asked to see thedrawing. I didn’t, and neither did he. 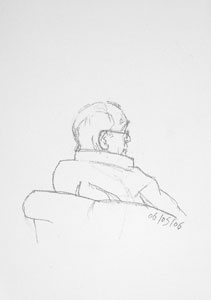 This is the last drawing from this trip. It’s not a good likeness, you can’t see much of hisface anyway, but it’s exactly howhe was sitting, and how he holds his head. It always makes me happy when someone’s bodylanguage makes it into a drawing. It doesn’t happen very often, but it’s as good a memoryjogger as getting a good facial likeness. Even though he doesn’t look like the this drawing,the drawing reminds me of him enough that I can still call him back to mind’s eye two weekslater.

The cafe sketches are becoming pretty much routine now, once a week on a Saturday morning.I miss the odd week but it’s been pretty regular now for the last couple of months.I don’t get nervous now when I godown there, I don’t feel quite so elated on the way home. But I still enjoy it a lot and Istill think it’s very good practice. As some of my other drawing exercises become more academic, Ithink it’s good to be able to balance controlled academic type drawing conditions with properworking from life. I’mgetting more interested in sight-size work, and plan to start some cast drawings. I could see asituation where you could feel a bit lost once you got out of your studio and tried to drawsomething real and alive if you’d become too dependent on rigid studio set ups. As long as I keep up thesesketches I can’t see that happening.