My second trip to the Cafe Nero today, and again I thoroughly enjoyed myself.

Before I started this series, I was expecting to find the challenge of having to draw quickly veryfrustrating, since I’m a slow, methodical worker by nature. Surprisingly though, I find it completelyexhilarating.

I’m feeling a real sense of liberation from the painstakingly slow, and often painful,self portrait drawings. I care much less about the quality of these drawings. That may sound odd, and I don’tmean to say that I don’t try, I do. But because I know I have minutes, sometimes seconds, to get the drawingdown, I’m much less critical of myself if I don’t produce a good one. If I start a drawing and can’t finishit because the subject moved, I don’t mind at all, I just move on to the next one.

The main thing I’m getting from them though is that I really believe that this is the best drawing practiceI’m doing at the moment, in terms of how much I learn from each drawing. And if I do manage to catch somethingabout the person I’m drawing, I’m all the more happy because I had to do it so quickly. 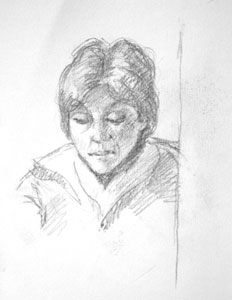 Today’s first drawing. Not so good, and very hesitant. It seems to take me at least the first drawing tobe able to settle into it.

The subject was a long way away from me on the other side of the room, and wasmoving around a fair bit.

This is in no way a likeness, I’m looking at it more as a warm up, so I’m notterribly concerned that it didn’t come off. I think I tried to get too much into it too, given the shortspace of time I had to do it. 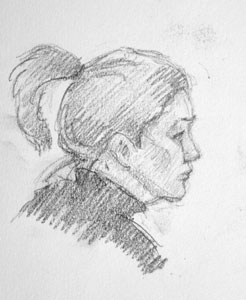 Second drawing, I’m much happier with this one.

I was consciously trying to concentrate on shapes here, and the relationship between the shapes, I think that’swhy this one came out better. The subject was much closer to me, about ten feet away, but quite difficult to seebecause she was silhouetted against the big front window of the cafe. Given that, I probably should have drawnher more as a silhouette or as a profile, and not tried to include tonal variations which to be honest I couldn’treally see very clearly.

I did catch her though. She was moving around a fair bit, which is another reason I’m quite pleased with thisone. She was a difficult one to draw, but I think I did ok by her.

I’m realising that one of the main skills thisseries of cafe drawings is going to teach me is patience. When the subject moves once you’ve started a drawing,you have three choices: Give up and start on someone else, redraw over the existing drawing, or wait patientlyand hope they get back into a position somewhere near the one theywere in when you started the drawing. For this one I chose option three, because I really wanted to finish thedrawing if I could

Its hard sometimes to keep from fiddling with the drawing and making bits up,which is the mistake I made with the first one today. Thankfully, every now an again this girl would lean forwardagain and be quite near the original pose, so with patience I could keep working. 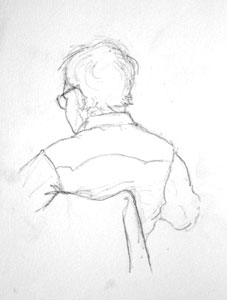 Number three for today. This guy was sitting directly in front of me, about six or seven feet away. This wasone of those ones where the subject is still for a long time, then starts jigging about as soon as you startdrawing. Again I had to be patient and hope he got back into the same position again, which unfortunately henever quite did.

I got the main lines of his shoulders and arms in before he started fidgeting, and I thinkthey came out quite well. I tried to strengthen the line where his arm-pit is resting on the back the backof the chair to show that the majority of his weight was resting there. The cowboy style shirt gave me a coupleof lines which made it quite easy to establishthe form of his back and arms with just a few lines.

I didn’t get near as long on his head as I would have liked, but not to worry. At least he was wearing glasses,which meant I could state the angle of his head very easily. Glasses really are a gift when you’re drawing fastlike this. 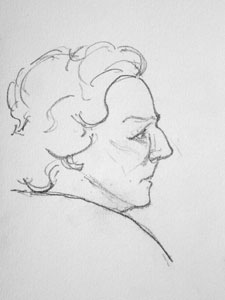 This is my favourite drawing from today, I had literally seconds to catch this woman before she moved, she didn’tget back into a position I could work from again so I had to leave this after less than a minute. In thiscase I think that was a very good thing, because the drawing really doesn’t need any more work. I would have startedto mess about with tones and probably would have ruined it.

The main thing I wanted to get here was her distinctive profile. I really think I got it, and it took no morethat twenty to thirty seconds to bang it in. Since the last drawing was hesitant and light, I used only a 3Bfor this one and went straight in with a strong line for her profile.

I fiddled with the drawing a bit more once her profile and the main lines of her hair were in, but I reallyshould have left it alone before that, I don’t think it needed any more work.

For me, this is the most successful drawing of my two visits to the cafe so far. It was fast, loose, stronglystated and it was very close to the subject. It taught me something about economy of means too. If you get a linedown right the first time, you don’t have to mess with it and spoil the drawing with hesitant scratchiness. Iknow its not a great drawing, but it is the best one so far I think. Most importantly it taught me something whichI hope to develop more as I do more of these drawings, that what you leave out is just as important as whatyou put in.