This is my third trip now for July, and I’m enjoying my time sketching in the cafe morethan I ever have.

I seem to have recovered from the frustration I was feeling at thebeginning of June.Not much has changed really, my mental attitude – trying to turn off my internal critic – andmy approach – just concentrating on heads, and roughing out the main shapes before I try toget any of the detail. Alright, I suppose quite a lot has changed, since they’re both quiteimportant things, but the difference in the experience for me is very noticeable. I feel muchcalmer about them now, neither elated nor frustrated. And I’m getting much more out of themin terms of practice. 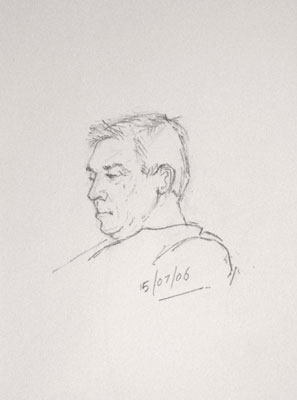 For a first drawing, I’m quite happy with this one. I started almost straight away today, therethe guy was, sitting fairly still, just asking to be drawn.

At least, he was sitting fairly still until I started to draw him, then he took it upon himselfto lean right back in his chair, (he’d been leaning forward when I started him). I mean really,how inconsiderate. It wasn’t really a problem, however, since all I had was the main shape ofhis head at that point, which hadn’t changed that much, so I just kept on drawing. After I hada bit more done,the head a bit more established, and how it joined to his shoulders, he took it upon himselfto sit forward again. Still not a problem though, because all I was after was detail at that point,and I got away with it. Likeness wise, this one isn’t too bad, considering how we was yo-yoingabout. He would have been a nice portrait subject. Then I could have told him off for moving. 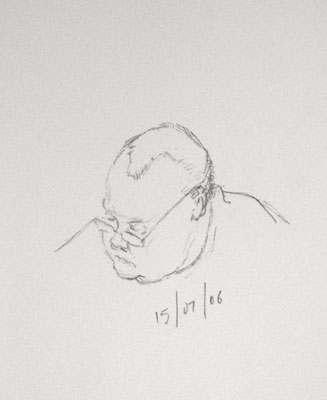 Big guy. This one was a frustration in a way, because he also moved shortly after I started him,taking off his glasses and sitting up. At that point, he also realised that I was drawing him and keptlooking over. I merrily pretended to be drawing somebody else, stealing the odd glance in his direction,trying to imagine what shape his eyes, nose and mouth would look from the angle I started him at. Buthe was wise to me.

Because of that, the likeness is very bad in this one. His hair is right, but that’s about it.I do hope I get another chance with him on another trip, because I’ve seen him there before andhe’s very distinctive looking. Sometimes it can take a couple of goes at someone before I can geta decent drawing of them. At least he didn’t come over and demand to see the drawing, I thinkhe would have been insulted. Sorry mate, but you should have sat still. 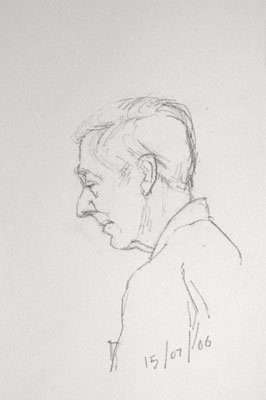 This one is my favourite from today. He came in and sat very close to me, at the next table, sideon so he probably wouldn’t notice me scribbling away. He was very thin, with a nice air about him,gentle and friendly. This was one of those rare occasions when I was tempted to show him thedrawing. His wife noticed that I was drawing her hubby since she was facing me, but she didn’t let on,which I silently thanked her for.

I must have got a good ten minutes with him, as cafe people go he was a great sitter. I evenhad time to make some corrections at the end to get his profile that bit closer. The likeness in this oneis actually pretty good for me, better than usual. 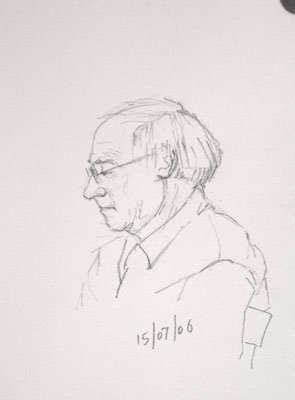 Last drawing of the day. I liked this guy because of his hair. I wanted to get the way it thinnedon top, and you could see the top of his head through it. I also liked the way it stuck out at the back,and his wrinkled forehead. Although I came somewhere close, close enough for me to remember what helooked like from this drawing, it looks to me like I’ve ‘normalised’ his head, reducing the distancefrom his profile to the back of his hair. Either that I’ve got his neck too thick, which is giving thatimpression. All the same, this one didn’t come out too bad, the likeness is reasonable I would say.

The endless variety of the human head never ceases to amaze me. The difference in the shape of theheads and of the features of all my sitters today is huge. In some ways I think it’s easier to drawpeople with very distinctive characteristics, people with more ideal shaped heads, like the first onefrom today, are harder to get likenesses of. Distinctive features can be used as a kind of a crutchfor inexact observation I think.

I don’t get an awful lot of choice about who I draw in the cafe though. The first consideration ishow clearly I can see them. The second is how still they’re sitting, and the third is how long they’vebeen there – I’ve learned from experience that a drawing of someone who has already been in the cafefor a while is unlikely to get finished. Drawing in cafes has its own set of requirements which Isuspect are very different from portraiture. But the principle is the same, it’s all eye training atthe end of the day.