Today was a good day.

The cafe was busy, but not too busy, and I got my favourite table at thefront by the window with a good view across the room. TheLast tripto the cafe I felt rushed, and couldn’t settle. It spoiled the drawings. Today I was more relaxed and itshows. 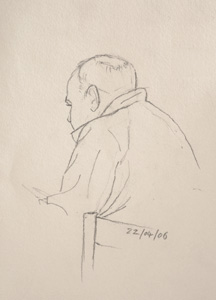 Today’s first drawing, quite a nice one for a warm up. After eight hour self portraits, I was reallyready for this. The release of just drawing for the hell of it instead of careful measuring andcorrecting felt good. I think that this is equally valid as practice though. Personally I find itvery easy to obsess over details, and forget to step back and look at the big picture. It’s the mainreason I overwork a lot of my drawings. With these cafe drawings, there isn’t time to think about muchdetail, so you have to make sure it’s the right ones you put in.

I’m working with the same stuff here as I am in a portrait drawing, trying to see how the shapesrelate to each other, to get them down right. But I only have time to think about the main shapes anda couple of details at best. I think that helps to break me out of my detail obsession andhopefully will be a skill I can use in portraits. Plus I love to draw people. 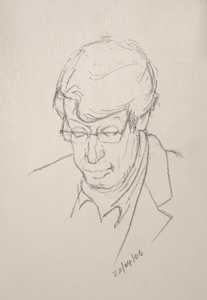 This guy was a real gift to draw, sitting quite still and with a lot of character.

Looking at it now,I can see that I’ve got his head much too long and thin, but at the time it looked fine. I wasinterested in getting his eyes against his glasses right.

I guess at the end of the day thisis a caricature. The distortion was unintentional, but it does intensify his characteristics. That’snot really something I’m supposed to be going for, but if I’m honest with myself I don’t mind it. Ithelps to give an impression of his character, and happened quite naturally. I think a small amount ofthis in a portrait would be ok, as long as it was an honest thing and not included for ‘style’reasons. 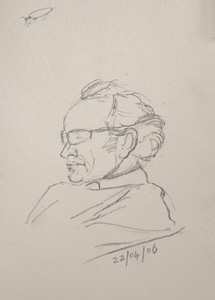 What drew me to draw this guywas his hair. He looked like a cross between Bono and Beethoven. I don’t know what it wasabout today, but there was a steady stream of interesting people ready to sit for me.

He seemed to be waiting for someone who was late, he kept checking his watch andlooking round. Eventually he must have decided that they weren’t coming and left, but I managedto get most of him in before he did. The little fly happened to alight on my table, so he ended upin the drawing too.

I think the proportions came out better in this one. I anchored his ear and the front of hisglasses early, which helped with laying the rest in. This is something I’ve picked up from theBargue drawings. First anchor the highest and lowest points, and furthest east and west and relateeverything to those. I didn’t do exactly that with this one, but something close. 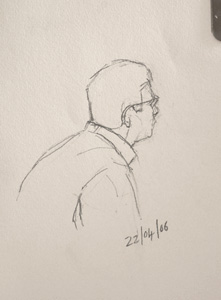 Not such a great one, this guy was too mobile and too far away, people kept getting in the wayand by the time I could see him again he was in a different position. I kept on correcting, redrawinghis body in the new position, but I was chasing something that didn’t want to be caught with thisdrawing. That happens sometimes. What I do with these drawingsa lot now is just wait when somebody moves. As like as not they’ll get back to a similar positionbefore too long and I can do a bit more. Not this time though, he appeared to have an endlessrepertoire of different position he liked to sit in. Not very helpful. 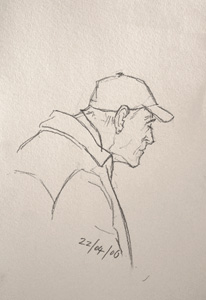 As soon as this old guy came in I wanted to draw him, there was just something about him. By astroke of luck, he came and sat right in front of me. I drew him while he was eating his muffin anddrinking his coffee. Often I wait for people to settle before I start to draw them, but I didn’t wantto miss this guy. Good job too, because as soon as he’d finished his coffee he was off. I’m quitehappy with this drawing. I managed to catch something about him, he looked so tired.

Although he sat fairly still, his face was in constant motion as he ate and drank. Despite that,I seem to have got a reasonable likeness of him, at least an impression.

I think what’s happeningnow is that through my practice my visual memory is getting stronger. I lose less information asmy eye moves from what I’m seeing to the paper. Or perhaps it’s that I’m carrying moreinformation over, more correctly, because I picked up more information first place by seeing morecarefully. I find that now I spend longer periods looking whilst I’m drawing, where before I wouldbe flicking from model to paper, sometimes drawing as I looked at the model and not at what I wasdoing. That may have it’s place, Frederick Franck would recommend it, but it’s not good foraccuracy. I definitely spend more time looking than I do drawing now.

This was one of those rare moments when I see something I really want to draw, and I have longenough to get it down, as close as I can to what I see. Those moments are the best things tocome out of these trips to the cafe. I feel I have a connection with this old guy now, and thisdrawing means more to me because of that. If I see him again in the cafe, it’ll be like seeing afriend.