Although today’s drawings didn’t come out as well they did on the last trip(I don’t think,)there’s a couple of nice-ish ones and it feels good to be getting into a routine with these drawings now. 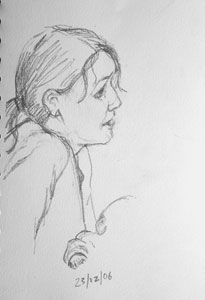 This drawing has the sketchy quality I’m used to for a first one. Also the proportions are out, largely becauseI didn’t plan the drawing first and started it too far over to the left. Trying to squeeze a drawing in when you’vestarted too far to one side is bad news, but I keep doing it for some reason.

I like this drawing for the subject, but it’s not one of the better ones I know. 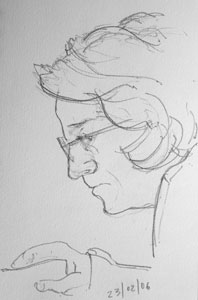 For some reason this one came out much bigger than usual. This one’s getting a bit stronger I think, I like theprofile line, its stronger and more definite than the last drawing. I’d have been better off leaving out his jokerubber hand though. 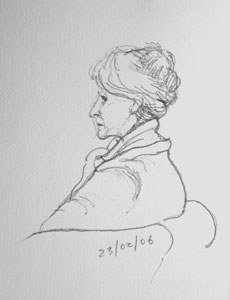 This one is a bit stronger, and getting back to what they were on thelast trip. The line’s notreally flowing though, it looks a bit nervous and agitated. All the same, I quite like this drawing. The likeness isn’tgreat though, looking at this one now I can’t remember her very well. 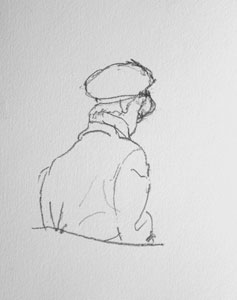 Last one of the day.

Some of the flow is coming back into the line on this one, but it’s a bit late coming. Across the shoulders andthe back is nice but I had some problems with the hat and the line of the head. Unfortunately this was a very quick onetoo, because she left a couple of minutes into the drawing.

I don’t think I was on the boil on this trip. But as usual I had a great time doing the drawings, waiting for subjects,and every drawing gets me a bit further along.