I’ve left this trip a bit late to write up. It’s over a week since this trip and the memory of it is a bit vaguenow.

The main thing I remember now is that when I got to the cafe all the seats at the front by the window were taken soI had to sit at the back, at the table I always used to sit at when I started doing these sketches and was morenervous about being watched. Sitting at the back is not so good because it means most of the people are silhouettedagainst the big window at the front, making them harder to see. 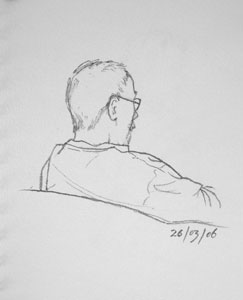 Not too bad for the first drawing of the day. I’ve seen this guy in the cafe a few times, but haven’t hadthe chance to draw him before. He’s quite studious looking, and wears those glasses attached by a bit ofstring to his neck, to stop him losing them I suppose. I missed the bit of string out though.

The proportions aren’t great in this drawing, his head is too tall, which makes it look a bit squashed andtoo big for his body, but it does give an impression of what he looks like.

The more I draw people, the more Ithink that it’s not necessary for the drawing to be accurate to give an impression of some-one. It’s not that Iwant that to happen, nothing would make me happier than if all these drawings were accurate, but even when they’re not,(actually none of them are,) they can still catch something about the person. I can see this guy in mind’s eye now,in exactly the position he was sitting when I drew him. I’ve noticed many times that if the drawing does manage tocatch something about the person then looking at the drawing again later brings back the image of whoever it is. If thedrawing doesn’t catch anything about them, it’s just a drawing and doesn’t remind me of the person. To me that’s a faileddrawing when that happens.I call this guy the professor, I imagine him as a history teacher for some reason. 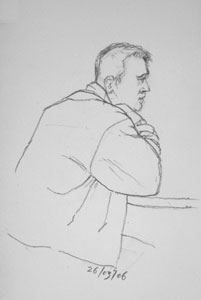 This is a case in point. Not only is this not a good drawing, but it doesn’t catch anything about the person. I can’tremember this guy at all, and because of that I know that this doesn’t look like him, or convey anything about him.Not much more I can say about this one. 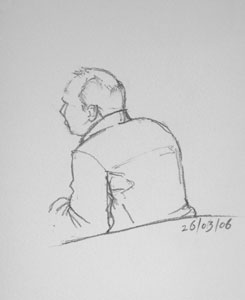 This one came out a bit better, I know because I can see him now.

I liked the position he was sitting in, and way his hair stuck out at the front of his head seemed to accentuateit. In terms of proportion and accuracy, this one is probably the best one from this trip, which is funny because itwas also the quickest, dashed off when I was about to leave.

So that’s it for this trip, only three drawings. I enjoyed my morning in the cafe as much as I usually do, but didn’tget much out of it in terms of either quality or quantity. Ah well, we all have off days.