There were no cafe sketches from last week since I was away for a few days over the weekend,celebrating a friends birthday. It would be nice to round off July with some nice drawings, buttoday wasn’t one of the better trips. 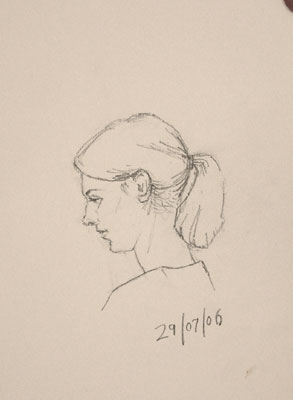 Usually, I start off rough and get better. Today, I started better and got progressively worse.This one is probably the best one from today, even though it was done very quickly. Young peopledon’t sit around for long, and they generally don’t sit very still either, which is partlywhy I draw so many crumblies.

But this girl was nice enough to give me about five minutes of her time before leaving, and I waslucky enough to get the drawing pretty much finished in that time. 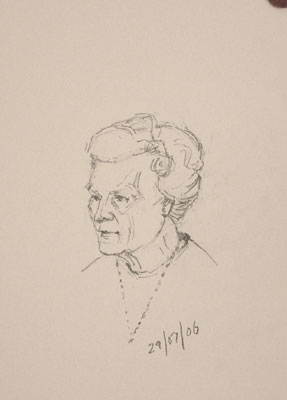 This one was a bit of a desperate attempt. She was sitting well away from me which meant I had ahard time seeing her properly, but for some reason (probably the nice weather) the cafe was veryquiet today and there weren’t many opportunities.

This one, although I don’t think it came out too bad, was a bit of a struggle. Sometimesdrawings just seem to run away from me no matter how much I try to concentrate on simplifying theshapes. I managed to pull it back enough for it to be at least a passable resemblance though. 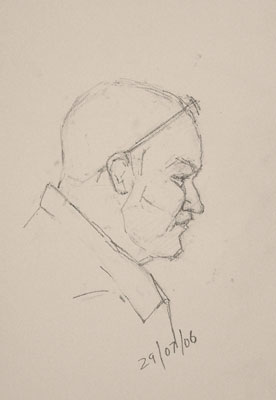 Talking of drawings running away from me, here’s a case in point. No matter how I tried, how manycorrections I made, I just couldn’t seem to get this one to work. It’s a shame because I had quite a longtime with this guy, he’s a regular and quite distinctive, and I would have liked to get a gooddrawing of him. There’s nothing like having a drawing fall apart before your eyes to destroy your confidence.I thought I was getting consistently better at these drawings, but it only takes a couple of bad ones tomake me wonder if that’s true. 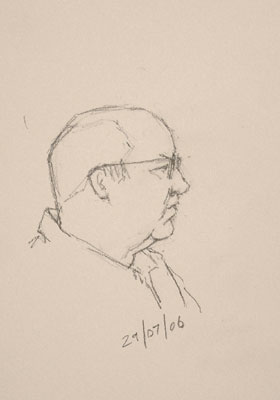 This was another desperate attempt. This guy was right across the room from me, largely in shadow,but being as there weren’t any really good models today, I tried with him. This was also another one of thosetimes when the person leaves before I can get the drawing finished, so I had to complete it frommemory. Anyone who knows me will happily tell you that I have a terrible memory, and Ican’t deny it. But I do think I need to work on my visual memory more. It should help with all my drawings.I need to think up some exercises designed to train my memory I think, and do a series of them.

So not such a great one today, but that happens sometimes. To be honest, I think I’m probably a littleoff the boil since day to day life has kept me from doing as much work as I’d like to recently. For at leastthe last fortnight, I haven’t been drawing or painting something every day, as I know I should, if for no better reasonthan to simply sustain the level I’ve got to so far. One of the things I think I need now is a simpleseries of drawings that I can do any time. The new series ofcast drawings is going to be very good for eye training, butit has one disadvantage: It means I can’t move my set up till I’ve finished the drawing, in the last one’sI expect to working for a few days on each drawing. That means that my easel and my work space are pretty muchtaken up until the drawing is finished, and I can’t do anything else that requires an easel.

My room is small, and I don’t really have the room for two setups at once, although that would be the ideal situation. I also only have one easel. As well as some visualmemory exercising, I think I need a way to be able to have two set ups on the go at once, despite the smallsize of my room. That’s two new things on the to-do list then. Memory exercises and figure out a way to have two set ups.Buy another easel, basically.