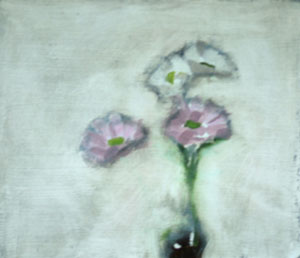 The one that got away.

As you can probably tell, this one didn’t work out so well.

Despite working on it over three days, and repaintingit twice, in the end I had to let it go – mainly because the flowers had wilted and the painting stillwasn’t working.

What I got wrong here was a lack of focus. I spent far too long messing about with the background cloth,trying to make it believable as a piece of cloth. I just couldn’t get it. I painted it twice, this picture showsthe painting after I’d scraped off the background for the second time. If the flowers hadn’t wilted Iprobably would have tried again, probably fruitlessly. It’s probably also obvious that I couldn’t bebothered to take a decent photo of this one. It takes a bit of time and effort to take decent photosof these paintings, and there doesn’t seem to be much point when the painting hasn’t worked out.

For what it’s worth, I took a few progress shots during this one, so here’s some of them, all fromthe second day: 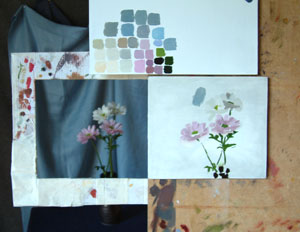 This is what the painting looked like about two hours into day two. I completely scraped it back and wipedthe panel at the end of day one, the cloth had come out so badly. All my practice seemed to desert me withthis painting, I’m still not sure why. But the paint had got so thick on the background on day one, and thecolours were so badly out, that I decided the best thing was to start again from scratch. 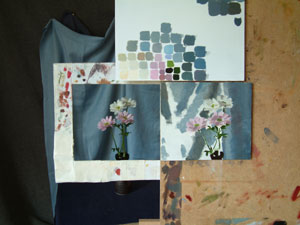 Here we are with a bit more of the background laid in. Although the overall colour isn’t too bad, thetones are badly out. 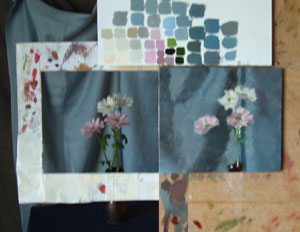 This photo is a bit blurred, but even here I can see that I’m spending far too long on the background.The paint on the background is thicker than it is on the flowers, and by far the majority of the time has beenspent on the cloth. Why did I get so involved in it? Certainlyit spoiled the painting. This stage is pretty much a repeat of what I had at the end of day one when Iscraped the whole thing back and started again.

Which leaves the main photo above, the most recent one. That photo was taken on day three, all I did atthat point was scrape the background off again. It looked awful. But I didn’t take the painting any furtherbecause the flowers were already wilting, and I decided I’d be better off just starting a new painting. Thisone had definitely got away and there was no way I going to be able to get it back.

So what conclusions can I draw from this? Well, the first thing that strikes me is that no matter howmuch better I think I’m getting, this is still going to happen sometimes. Every now and again a painting isjust not going to work out, and I have to accept that.

For this particular painting, I let myself get too involved in the background at the expense of thepainting. After all, this is a series of ten flower paintings, not ten background paintings. So I guess themost useful thing I can take from this is an awareness of how losing the focus of the painting can scupperthe entire thing. This painting would have probably worked out fine if I’d just put in a general colour forthe background and then got straight on with the flowers. So I’ll just try to keep one eye on focus in futureand try to make sure it doesn’t happen again.

Yesterday I was in the National Gallery again, looking at Rubens and Rembrandt paintings, two of myfavourites. They’re both very instructive because you can see how they built up their paintings. Whatalways surprises me about both of those painters is how loose and sketchy much of the surface of the paintingis. Especially Rubens, his backgrounds are often just barely suggested, with loose areas of daubed on colour,painted very thin with what looks like a high percentage of medium to help the paint flow, and with thestreaked ground showing through in many places. But get to the faces, and you can see where he spenthis time and effort. They’re just stunning, and he could make flesh live like no-one else, that I’ve seenanyway, except for maybe Van Dyck. So that’s the lesson I’m taking from this painting and from Rubens,to focus on the subject and to do justas much as is required across the rest of the surface of the painting. Thanks for the good advice Peter Paul,I’m listening.