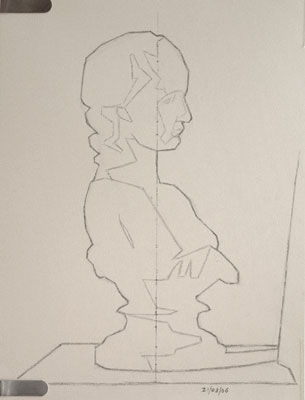 So here we are with the second one of this series of ten completed.

I had lots of fun and games with this one. Firstly, I realised once I was a fair way through thedrawing that I wasn’t 90% to my drawing board. This produces distortion in the drawing when it’s lookedat flat on, which is not good. I’ve learned that lesson though, so for Clytie 3 I’ll be extra carefulto make sure I’m looking at the drawing board flat on, not at an angle.

Secondly, the set up moved a couple of times whilst I was working on it. Obviously that’s not a goodthing either. One time, Michelle tripped over the easel leg and moved the easel. I don’t think she realisedthat it was a problem because she didn’t tell me. The next time I came to work on the drawing, after halfan hour or so of thinking either that I’d donea really poor job of the laying out, or that I was going crazy, I realised that the only explanation forall my measurements being out was that something had moved. She owned up eventually. I was not happy.

The second time it moved, one of the cats had taken a fancy to the pendulum and tried to climb up thecloth to get to it. Also not good. At least Clytie didn’t fall on his furry little head.

Despite all these problems, I was determined to get the drawing finished, at least as far as I’d plannedto take it. This one is a schematic, like the first one of the series. On the third one, I’ll be refiningthe line more before starting to add tone on the fourth.

One thing worth mentioning is that I changed the way I approach the measuring a little in this one.

I’ve started using a ‘divide and conquer’ approach. For each point on the drawing, I take the verticalmeasurement first, or how high relative to the top and bottom points a given point is. After three goes,I usually get the vertical distance somewhere near. Once I’m pretty sure that’s right, I get the horizontalposition of the point, or the distance from the central plumb line. Again, this generally takes at leastthree goes to get right. This means twice as much measuring for each point than I did on the first drawing,which is probably why this one took more than twice as long as the last one. 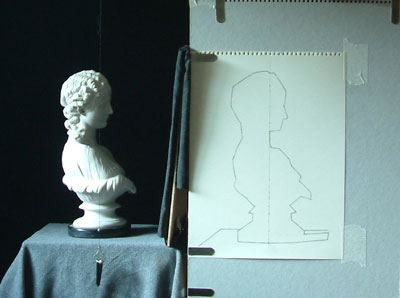 This is pretty much stage two. All the main points have been measured out and laid in, and the dotshave been joined. Actually, this shot is a shade past stage two, because I’ve already done quite a bit ofcorrecting at this stage. Once the outline is in, you can begin to see where you’ve made mistakes with theangles of the lines. It was at about this point that I realised that I wasn’t flat on to my drawing board,so was producing a drawing distorted by the perspective on the board. No doubt someone with more patienceor more integrity than me would have stopped at that point and started again. I don’t have much of either,apparently, because I couldn’t bring myself to throw away the ten or so hours I’d already spent. I soldieredon. 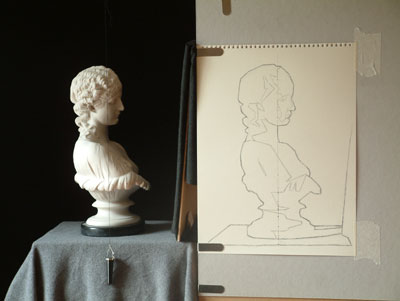 Here we are with the drawing nearing completion. The outline has been refined with more detail, and themain tone blocks have been represented by outlines where they change from dark to light. I must admit, this bit gave mea lot of problems this time. The difficulty with this is that tone, in the real world, rarely changes from dark to lightwith a clearly defined line, it gradually fades from one to the other. So for these schematic drawings,it’s necessary to decide where you’re going to say, “this is the end of the shadow, after this, it’s light”.

Getting that right is going to have a big influence on how convincing the form is as I get further throughthis series and start to add tone, of that I have no doubt. I guess it’s one of those things that will becomeeasier with practice.

The third drawing in this series will be started shortly, as soon as I get a second easel next week. This drawingtook around twenty hours, and the set up had to be left in place for the whole time. Since I’ve only got the one easel,it meant I couldn’t do any other work requiring an easel until this was finished, which I found pretty annoying.So drawing number three is going to be started on a separate easel, leaving this one free for painting or whatever.Quite how I’m going to squeeze two set ups at once into my small working space, I’m not sure, but I’ll justhave to find a way.

Now that the days are shortening, I’m going to start doing these drawings under artificiallight soon. I’m not looking forward to it, I like to work with natural light, but this is all about eye training,and there’s no earthly reason why I can’t do that under a strong electric light. Oh yeah, that reminds me,I need to sort out a good light too. More on this as and when it happens

Back to ten cast drawings