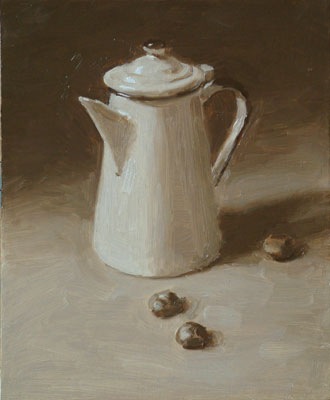 The finish on this one is a little rougher than some, but that’s all to the good.

AfterI had some problems with getting tied up in detail too soon and losing the balance of the tones in thelemon and bowl study, I builtthis one up in a much more organised and deliberate manner, working from the general to the specific.that meant that I spent more time on trying to get the tonal balance right, which is as it should be,since this current crop of studies are exercises in relative tone. I didn’t get a lot of time tomess about with details and finish on this one, since the days are short now, but the painting is nonethe worse for it, I think.

The key thing with this one was to make sure that I didn’t push up the value too high on the side of thecoffee pot facing the light. If I let that happen, then I would run out of headroom in my lights for thehighlights. So this was a good exercise in retaining the ratios of the tones whilst still leaving enoughroom for the highlights to work. I’ve already gone on at some length about this in the write up of thejar and conkers, so I won’t repeatmyself here.

This painting was the first of this batch in which I started to use a more deliberate method tobuilding the tonal foundation of the picture. I’m working pretty much as I did in the Harold Speedelementary tone exercise.In that exercise, the painting was built up in a deliberate series of steps. First the general background tonewas laid in, then the main cast shadows. Although these tonal blocks were put as evenly and as flatly aspossible, a lot of attention was paid to the edges. For example, a shadow cast by an object in naturallight will have sharper edges close to the object, increasing in softness the further away the shadowgets. Some shadows may fall over the edge of the object, obscuring the edge completey. That had to be representedas truthfully as possible in the tonal blocks. Once the background and main cast shadows were put in, theshadow area of the object was filled in, followed by the half tone block and the light block. At all stages, particularattention was paid to the edges.

Edges. I don’t think I fully realised how much the quality of edges can create a convincing feeling of formuntil I did the elementary tone exercise. When I did that painting of the Adonis, I found that when I cameto the final modelling and finishing there was very little work to be done since the tones and the qualityof the edges were already doing a convincing job of describing the form and the light.

But that first exercise was from a cast. The tonal range of a cast in daylight is quite easily matched withpaint, there are no sharp, bright highlights. This painting includes a shiny white enamelled surface,which does give brighthighlights, so I had to do a lot of translating of the tones in order to get the highlights to show. So Imodified the Speed approach somewhat. I began by stating all the tonal blocks first, without paying anyattention to the edges. I knew I’d got some of the basic relationships between the tones wrong in my lasttwo studies, so I wanted to get the panel covered first so that I could see how all the main tonal blocks wererelating, one to another. Once I had them all in, I spent some time tweaking them until I was satisfied thatI had the relationships between them fairly accurately translated into my narrower tonal range.

What really surprised me is that even at this early stage, before I’d even got to the edges between thetone blocks, the light was already there, the coffee pot was already starting to live on the panel.Once this was done, I then returned to the Speed method, working on the background first, then the castshadows, then the objects, looking always for the quality of the edges. But this time, since I had thetones of all the main blocks established, I didn’t make any major mistakes in the tones, I didn’t runout of headroom like I did on the last two. 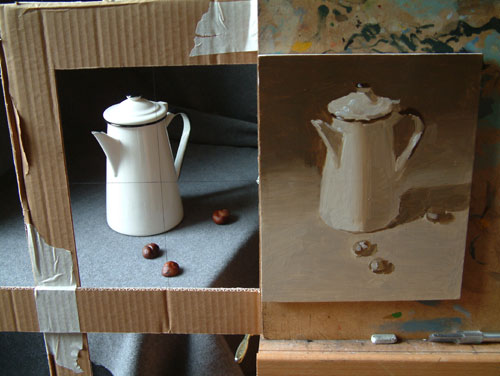 Here’s the painting at this early stage, with the tonal blocks laid in very roughly. There’s also some detailhere, but only in the highlights. I needed to have them established at this stage so that I could see how they weregoing to work. The drawing is very rough, and the paint is laid on pretty thickly without much regard forsurface texture, but at least I can see how all the tones are relating.

You can see that I’ve brought down thetone of the side of the coffee pot in the light, in order to save my pure white for the highlights. I need that toneto be darker than it actually is in order to preserve the ratio between it and the highlights, or the highlightswill get lost. This is what I mean by relative tone. I’m changing what I see, not trying to match the tones exactly,because it simply can’t be done. What I’m trying to do is preserve the ratios between the tones whilsttranslating into the narrower tonal range I have available to me with paint.

I find it interesting that the camera has taken a rather different approach to this problem than I have,it’s averagedout the lights, and accepted the glass ceiling of it’s tonal range, with the effect that the highlightson the coffee pot have completely disappeared. You can see them quite clearly on the lid of the pot inpainting, I could see them quite clearly with my naked eye, but the photograph misses them entirely. Andpeople say cameras never lie. Some of this may be down to my incompetence with a camera of course, but this is asgood an illustration as I can possible find of why I don’t like to work from photos. When I work from life, Ihave all the visual information in nature available to me, from which I can select what I want to include in thepainting and how I want to treat it. If I’d done this painting from a photograph of the pot, there would have beenno highlights, resulting in, I think, a weaker translation of the object into paint.

Once I’d got the painting to this stage I had half a mind to leave it as it was. These are supposed to be justtonal studies, after all, But I couldn’t resist a bit of tweaking, to see if I could tighten it up a bit. It didsurprise how much the drawing can be sorted out, even with thick paint like this. Painting wet into wet ina single session like this does apparently mean that you can be very loose to start with and tighten thingsup later, which was a new way of working for me. The combination of the tonal studies and using a slightlymodified version of Mr. Speed’s tone exercise have changed the way I paint completely. I go for opaque paintacross the whole panel straight away now, whereas I’d got into the habit of painting shadows translucently beforewith maroger medium.

Looking back at my earlier paintings, the mistakes in the tonal balance fairly shout at me.In particular, I often used to paint cast shadows much too light. Through these tonal studies, I’m startingto evolve a different approach, which I think is giving me a more convincing feeling of the light. The paintis harder to control, but I’m painting now, not just staining the panel with the odd area of thick paint. Andby taking out little tricks like translucent shadows and thickly painted lights, I’m being forced to getthe same (usually better) effects with more simple means. I plan to return to the opaque/translucent methodat some point, but not until I can do a convincing job of a tonal study with flat opaque paint. I had the cartbefore the horse, I think, and I need some practice with this more direct method before I get into theintricacies of technique. I need to get better at translating tones effectively because I thinkit provides a very solid foundation on which to build up a painting. When this gets to be second nature, Ican trust myself to get it right without having to concentrate my whole attention on it. Then I’ll also beable to think about re-introducing colour without having too much to deal with at once. That’s the real value of takingout particular aspects of painting, like I’m doing with tone and edges here, and practicing them seperately.Painting is a complicated business, and trying to do everything at once can be detrimental to your progressionin the long run.

This raises questions for me about the advantages and disadvantages of being self taught, questions I keepcoming back to as I work through my plan to become a full time painter. If, when I starteda year ago, I’d limited myself to tonal studies like this for the first six months or so, I would undoubtedlybe painting better now. Many times lately I’ve wished that I’d discovered Harold’s book last year. But because of all themistakes I’ve made with this, I think I’ve learned the lessons much more thoroughly. I still think that’s the realadvantage of teaching yourself, but you have to accept that the process will be slower.