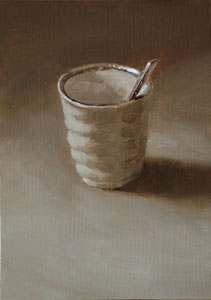 All these tonal studies have been derived from the series ofstill life drawings inone way or another. This one is a composite of two of the drawings,the cup, teaspoon and shelland theglass and teaspoon.

I’ve taken the backlighting from the glass and teaspoon drawing. There’s something I likeabout the little highlight on the spoon, the way it pops out of the drawing. I wanted to see if I couldcatch that again, but in paint this time.

Like with the tea lights painting, I had the idea that this set up was too simple to be interestingwhen I got half way through the painting. I like to place smaller objects at the front a lot to leadthe eye into the picture. Thus my obsession with conkers, they’re very handy for this, and they remindme of a holiday in Italy last year. It was on that holiday, in September 2005, that I decided once andfor all that I was going to return to painting, so including conkers is, for me, like restating thatcommitment. They serve as little reminders of the moving experience I had when I saw some Tiepolopaintings in the flesh for the first time in Venice, and the realisation hit me like a bus thatI’d wasted the last ten years of my life messing about with other peoples’ web sites when I should havebeen painting. 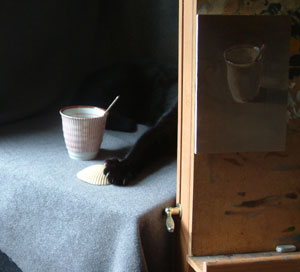 But I digress.About half way through this one, I though I’d add a shell, referring back to the drawing of this cup.Not a bad idea,but Smokey the cat (known affectionately as Moker and blessed with a marked propensity for getting into trouble)had come to sit in the shadow box. Moker likes shells. He likes conkers even more, the little bugger.He evidently thought that I’d put the shell there for him to play with, and promplty pushed it off theedge of the box, so no shell in this one.

Backlighting is a good test of my approach to compressing the tonal range. The firstthing I do on all these studies after the basic drawing out is to establish my lightest lightand my darkest dark. When you paint something back lit like this, your easel necessarilyends up in shadow, unless you have another light source you can place on it. I don’t. 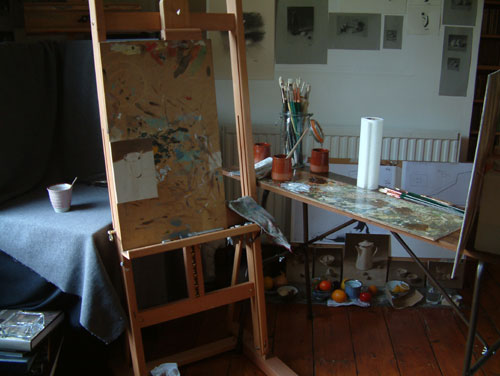 What I did do though, is put a white painted board on my painting table which reflectedsome light from the window back onto the panel, making life a little easer. You can justsee the board balanced precariously on the table at the right of this picture.

Backlit subjectshave given me trouble in the past when I was still trying to match the colours I saw as muchas I could. White paint in shadow looks, well, grey, especially in comparison to a highlightglinting off a metal object like a spoon. But I no longer try to match tones to what I see,I take the subject as a starting point, and try to get the relationships between the tones right.That being the case, a set up like this with back light should present no problems for me now.

I have to admit, that’s not quite the case in reality. This one was a little harder, and tookmore tweaking of the tones before it looked at all believable. There were many points during thisstudy when I thought it was going to fall apart and I wouldn’t be able to save it, but it came outok in the end I think. The drawing is more than a bit wobbly, but that’s largely because I was having toconcentrate on the tones more than usual.

My painter friend Bill from Australia (hi Bill) emailed me to tell me how much he liked the highlight on thespoon in the glass and spoon drawing. So this one is special for you Bill, I hope you like it. DidI get the highlight right?