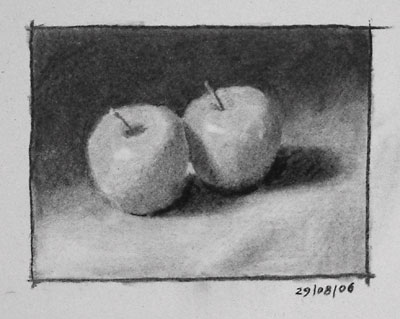 For this drawing, I took some ‘work in progress’ shots as I worked, to show how I approach them. It’s a bit frustrating sometimes to keep having to stop to take the photos, so I doubt I’ll do this again in this series, unless my approach changes drastically from this one.

Although I said earlier that one of the nice things about this series is that I’m not tied to the easel, using a sight size approach, I’ve found myself moving back to that as I’ve worked through the drawings. As long as not all the drawings are done this way, I’ll still be reducing my dependency on the method.

The thing is, working sight size at the easel really works. It helps to focus in on the subject, and I believe I get more from the exercises working this way.

But I’m still conscious of the fact that I don’t want to become dependent on it for all my work, or I’ll be scuppered when I go out into the world to draw or paint under less controlled conditions. 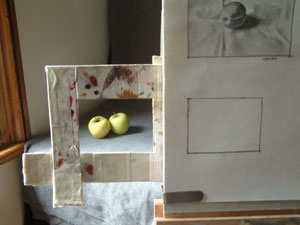 So here we are at the start. I’m using my little view finder as usual. The more I use this, the more I realise what a useful little tool it really is. All the composition decisions can be made without ever having to make a mark on the paper, and when you finally come to start drawing, you have exactly what you need, isolated from its surroundings.

As well as it making it easier to see the pattern of values, it helps with the drawing out, getting things in their right place. I guess you could say it works as a one-square grid. I’ve drawn out a matching rectangle, freehand, with charcoal on the paper, so I’m going to be drawing these apples the same size as I see them. 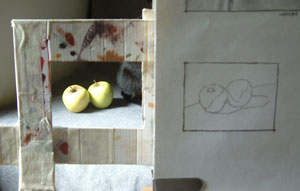 Stage one, the layout.

This is the last time I’ll be using any line in this drawing, apart from filling in the tone blocks, which we’ll see at the next stage, and these lines will be obscured when I get to that point.

I’m just defining the edges of the main tone blocks here, to make it easier to do the next stage.

The black furry lump is Sassy, one of our cats. She appears to have taken a fancy to my shadow box and spends most of the day sitting in it now, complaining vociferously when I move her.

The shadow box is just a big cardboard box with two adjacent sides and the top removed. I’ve lined it with black cloth to help cut down on the amount of reflected light and simplify the shadows. 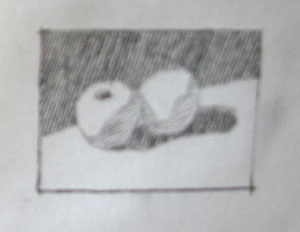 The next stage is to begin filling in the tone blocks with the charcoal. I do this like the Bargue drawings, first drawing in even lines to fill the shape, then smoothing them out with a stomp.

This photo is very blurred, I know, but it does show how I’m doing this bit. I think I included it because I’m quite proud that I was patient enough to do it this way. It would have been quicker to just scribble it in, but I’m trying to work slowly and not to rush. Doing it this way helps me relax and take my time.

It also results in more even covering with the charcoal. 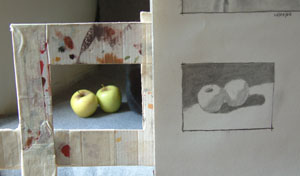 At this stage I can see how I’m doing with matching the tone values on the subject. Generally I find that they’re too light at this stage, and I need to go over them a few more times, gradually darkening the tone until I think I’m somewhere near to what I see.

I seem to have a tendency to put in values too light overall, I’ve noticed this many times with my still life paintings too. This series of drawings has confirmed it without a doubt, so I know now that it’s something I need to watch out for. 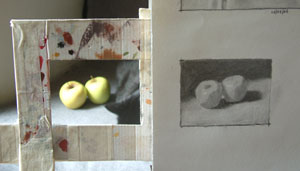 Stage four, and some more mid to light tone has been added.

Even if I had full light on the paper, it wouldn’t be reflecting as much light as the highlights on the apple, because the surface of the paper is not as reflective as the surface of the apple. So I physically can’t match what I see with my materials. I’m forced to work with a more narrow tonal range than I see.

This goes to the heart of what this series is supposed to be teaching me. Is it better to accept this ‘glass ceiling’ for my light values, and still to match the other values as close to reality as possible? Or is it better to preserve the relationships between the tones as far as possible, darkening my darks?

That’s one of the things I hope to practice and learn more about during this series. It strikes me that if I take the second approach, I’ll just be shifting my glass ceiling to the dark end of the tonal values, exchanging a glass ceiling for a glass floor, if you will.

What really matters, of course, is simply finding what works best in the drawing. Already, I have a feeling that this might be different for each piece of work, depending on what I want to achieve. 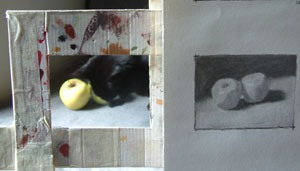 A bit further through now, and Sassy has decided that she wants to face the window. She’s very cute, but not very considerate.

At this point, I’m really just trying to fine tune the tones, trying to relate one to the other, and adding more detail to the shadows. 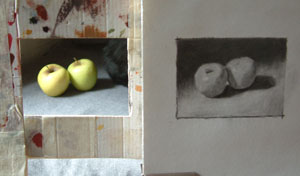 Here the drawing is nearing completion.

I’ve softened the transition from the darks to the lights with the estompe, and worked more into the detail of the shadows. Sassy has thankfully moved over a bit, so I can actually see what I’m drawing. Maybe she’s not all bad. 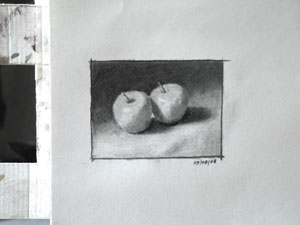 The finished drawing on the easel. I’ve turned it a little to the window for this shot, to get better light on it.

One of the things that bothered me about this drawing was the fact that the highlights weren’t differentiated enough from the lighter parts of the mid tone, they just don’t stand out. The next drawing after this, the Apple and Apricot, I did on grey-toned paper, to help me have darker mid tones.

It worked, to an extent, the highlights do stand out more, but I have a feeling that it worked a little too well, and the lighter mid tones are too dark.

That’s the point of working in series like this, to try the same thing, to meet the same challenge, multiple times under slightly different conditions. I’m doing 100 of these drawings, my biggest series so far, because I feel that there’s a lot to learn here.

I’m hoping that when I get to the end of this series that what I’m learning here will translate directly into better tone values in my paintings, and thus stronger light and form. It’s also very good practice for when I get to using tone in the series of ten cast drawings.

But probably the best thing about this series is the amount of practice I’m getting. These drawings are very simple, and only take an hour or two each. That makes it easy to get started on them, because it’s not some big undertaking. If one of them doesn’t come out so good, it doesn’t matter, because I’ll get another stab at it tomorrow.

I enjoy these drawings, I think it’s my favourite series so far. So often people try to run before they can walk. I do it all the time. A long series of simple little drawings like this allows me to take my time, to saunter slowly through each drawing, without any self-applied pressure to be producing finished work. And doing at least one of these every day means that I’m always practicing, even if it’s only a little bit.

Little and often. It works.