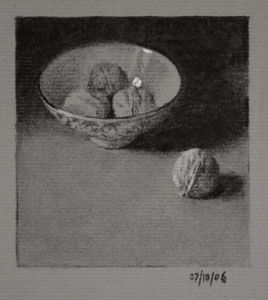 This bowl comes from the same set as the previous one I’ve drawn a couple of times in this series. I love drawing these little Chinese bowls.

I’m itching to paint one, but I must stick to my plan, and get at least a bit further through this series of drawings before I allow myself to get the brushes out again. At least half-way.

Like all the most recent drawings of this series, I followed a set process in putting this drawing together.

All these drawings are about tone. I started the series to investigate whether it was more important to match the values I see as closely as I can, or to relate them to each other within the drawing, therefore moving deliberately away from copying what I see.

This question came about because it has become obvious to me that, when drawing or painting, I’m working with a more narrow tonal range than I see in nature. In particular, I can’t match the intensity of the highlights on, oh, say, the surface of this bowl.

I’m not going to argue with you about this. It simply can’t be done.

Well, I’m just over a third of the way through the series, and I have my answer: The tones must be related to each other, the drawing must be allowed to follow it’s own logic of tonal relationships.

This creates a much more convincing feeling of the light. That may not be everybody’s answer, it may not be your’s. In fact, you’re more than likely dealing with a completely different set of questions.

But if you’re working with representational drawing and painting, you’ll come up against this when you’re learning I think, and this is my solution to the problem. Right now it is, anyway. That may change with time of course.

Although I’ve got my answer now, the series will continue, because I’m also getting all kinds of other good stuff from it, and now I’ve reached that conclusion, I need to practice with it.

“So what is that process you mentioned?” I hear you cry. You didn’t? Well, I’m going to show you anyway.

The Drawing Process, Step by Step 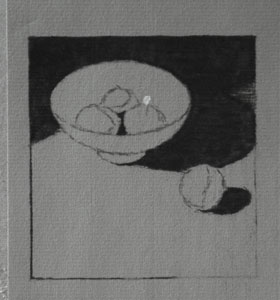 Here we are near the start. I’ve drawn out the main shapes, and filled in the deep shadows, my darkest dark. That’s one end of my tonal range established. I’ve also made a note of my lightest light, the highlight on the bowl. That’s the other end.

Now all I have to do is relate all the other main tonal blocks to those two.

One thing I find interesting about this is that it shows how little you can get away with and still represent form and light to some extent. Just a few outlines, the main shadows, and the main highlight, and there’s already a vague impression of light. As long as I respect these two ends of my tonal range, and don’t push anything else too close to them, especially the highlight, they should continue to work like this throughout the drawing. 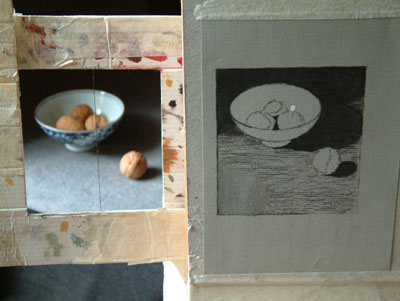 I decided to lay in the main tone of the cloth next.

I’ve also kept the subject in the photo here, because I want to highlight a couple of things about how I work with these drawings.

Firstly, the framer. That’s just two bits of L-shaped card, stuck together and taped to the side of the easel, with a vertical central line of black cotton stuck to the back with blu-tack.

The framer helps me both to focus on what I’m drawing, and to set up the composition. I can make all kinds of little changes in the set up before I start and see exactly how it’s going to look in the drawing. The cotton plumb line is purely to help with the drawing out. The position of everything on the drawing can now be related to the edges of the framer and the central construction line.

This is a big help with eye training. When I’m confident enough that I can just imagine that line, I’ll stop using it, but I haven’t reached that stage yet.

“But that’s cheating!” I hear you cry.

No, it isn’t. There is no rule book, ergo there is no such thing as cheating in drawing. If I was taking a photo and tracing it, it still wouldn’t be cheating. I can’t see the point in doing that, because the value for eye training would be exactly nil, and I might be introducing camera lens distortion into my drawing.

But it still isn’t cheating, it’s just doing yourself and your work a disservice. Why use a mechanical eye when your own are so much more sensitive? Harder to use, maybe, but don’t forget, there are no short cuts.

Manipulating the values in the drawing

The other thing I want to point out here is that I’m obviously putting a darker tone on the cloth than I can see on my subject.

I’ve done that because I’m trying to relate it to my highlight, working from the top of my tonal range down. I want that highlight to stand out when the drawing is finished, not disappear. I’ve laid in the tone pretty roughly with the flat side of a sharpened willow charcoal stick, and you can just see there at the bottom left where I’ve started to smooth it out with an estompe. 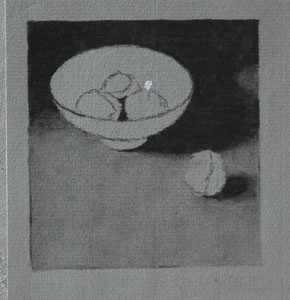 Here we are with the cloth tone all smoothed out. After it was blended in with the estompe, I went over it with a little pad of soft tissue paper to smooth it out a bit more.

The tone is a shade darker than it is in reality, and flat, but my little highlight looks to me like it’s still working ok, and that’s my aim.

This is opening up a can of worms for me.

When I got back to drawing and painting almost a year ago now, I was mainly concerned, obsessed even, with copying what I saw in terms of colour and value.

All that’s changed now. I’ve come to the realisation that sometimes it’s necessary to deviate from what you see in the drawing, in order to get a more convincing feeling of reality. Coming to this conclusion is opening up all kinds of new horizons for me, which is both exciting and scary and the same time.

Where will it lead? Will I be putting my unmade bed and some vodka bottles in a gallery next year? Will I start painting with elephant poo?

But I’ve accepted that the picture must dictate it’s own terms, and those terms may require me to draw or to paint something I don’t see, in order to create a more convincing impression of what I do.

Edge Control in the Drawing 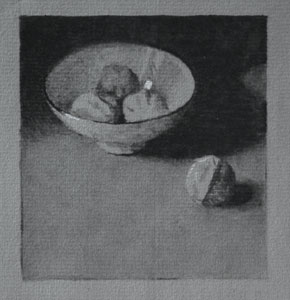 A bit further through here, and I’ve started adding some tone to the walnuts and the bowl. Something I’ve been spending more time thinking about lately is edges. In the drawing of the jar and conkers, I tried to keep everything pretty wooly apart from the edges around the front edge of the top of the jar. I wanted to see what effect it had on the depth, if it made the front edge come forward more.

In this drawing, I’ve tried to put sharper edges where a light plane is thrown into relief against shadow, like on the right edge of the inside of the bowl, and the top of the walnut at the front. Where a plane is moving into shadow, and backed by shadow, I’ve left the edge soft.

I’m thinking of the back of the bowl, and the right edge on the outside. Also the right plane of the walnut at the front where it disappears into the cast shadow. I think this happens in reality, which is partly what has led me to do it, (along with a lot of reading and some looking at pictures,) but it seems that if the effect is accentuated a little, it helps the strength of the picture, the feeling of three dimensional form.

Since I’ve been doing that, I’ve noticed it in many paintings. I’ve been looking at Chardin a lot lately, and he has very few hard edges in his paintings, only on focal points does he describe a hard edge. This should translate directly when I get back to painting, I hope.

To finish this drawing, I added a bit more detail from this last stage, but not much. With all these drawings, once I’ve gone through the pull and push of laying out the tones, I’ve pretty much finished what I set out to do. I still don’t want to get tied up in trying to produce highly finished work too much, there’s much more to cover about the basics before I start worrying about that.

I still can’t wait to get back to painting though – I’ve banned myself from painting at all whilst I work through this series of 100 still life drawings, so that I can focus on the skills I’m developing now – mainly value control.

All the time, whilst I’m doing these drawings, I’m thinking about how I could paint the set ups, what techniques I could use. I’m storing up a bunch of stuff to try, and it’s getting harder to keep from reaching for the brushes and paints.

Some of the drawings which came out nicer I plan to do as similar sized paintings when I get back to it, so I already have a fair amount of compositions ready to go. And I also have a new way of thinking about what I’m doing, which may take me beyond the dry, literal look of a lot of my still life paintings.

I want to start making pictures instead of just copying what I see, pictures that live.