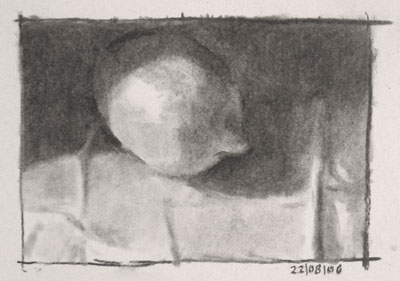 With this first drawing of the series, I was very much feeling my way. As I began this drawing, I had no idea how it was going to turn out, how I was going to build the drawing up, or how many of these still life drawings I was intending to do.

The drawing took about an hour to complete, and by the time I’d finished I’d definitely warmed to the idea of a series of tonal still life drawings. It allows me to take out one aspect of drawing and painting – the values – and to deal with it almost in isolation.

As I was drawing, I began to think that this series could teach me a lot. Many of the drawings I do now, like the current series of cast drawings for example, are taking a long time to complete. Because they’re strictly sight size, I’m tied to the easel,and can’t move the set up until the drawing is finished.

This series is being approached in a more relaxed fashion, still roughly sight size, but drawn largely away from the easel in a sketch pad. It means that I can do them anywhere, and they are finished in one sitting, so there’s considerably more freedom. Like the cafe drawings, they should help me avoid dependence on sight size drawing and a static easel set up. They’re also fun to do, since, being small sketches, I get less caught up in trying to produce a finished piece and just concentrate on the job at hand.

This drawing is very small, only 3 inches by 4. I intend to keep this small format for the majority of the series. By the time I’d finished this drawing, I’d decided that I’d learned so much from it, and enjoyed it so much, that a long series would be a good idea.