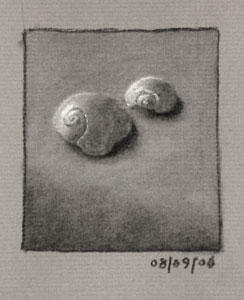 This was an interesting one. I deliberately gave myself a problem to see if I could solve it by usingmy current approach to establishing tones in a drawing, courtesy of Mr. Steven Sweeny of the Portrait Artist Forum (that forum has closed now).

The problem is this: I was facing partly towards the window, with the shadows of the shells towards me, and the light source (the window) slightly behind them.

That meant that my paper was in full shadow, and my lightest lights were going to be appearing very dark to me in comparison to the highlights on the shells. I’d just have to trust that they were right, since they would most definitely be looking too dark to my eye.

The current approach is this: Establish the lightest light and the darkest dark on the drawing immediately, then relate all other tones in the drawing to those.

Now, I won’t deny that setting up facing the window did make the drawing a little more difficult to do. There’s no doubt about it, the tones I was putting down didn’t match what I was seeing, which can be pretty disconcerting. But I trusted to the method, and relied on whether the drawing was working more than how closely I was matching what I saw.

I’m slightly uncomfortable with this approach.

For the best part of a year now, I’ve been banging on about learning to see, and trying my damnedest to match what I see as closely as I can. I can’t deny the fact that it’s got me into trouble more than once. The painting of the plum from last March springs to mind.

That seems like an age ago now, but it was only six or seven months. It was precisely this problem of having the working surface in shadow which threw me so badly back then. I got away with it a few months later with the Wedgewood Saucer and Clementine, but to be honest, I think that was largely luck and I was having a good day. Plus, now I think about it, the panel I painted on was much more towards the horizontal, which meant a bit more light falling on it that when I painted the plum.

One has to be pragmatic. If allowing the drawing or painting to dictate it’s own logic, at least in terms of value, makes for a better, in fact a more accurate, piece of work, then so be it.

A few outbuildings of my overall approach may have crumbled, but the basic structure still stands, I still want to learn to see, I still want to draw and paint what I see. In fact, if anything, deliberately not matching what I see here has paradoxically enabled me to get closer to it. That can’t be a bad thing. And being able to deal with stuff like this can only be helpful, because it means I’m less tied to perfect, controlled conditions.

I’ve been wondering today if this means that I can paint something with direct sunlight on it. I’ve been assiduously avoiding that so far, since I know I can’t match the luminescence of direct sunlight on, say, the surface of a lemon, with paint. It’s tempting to try. But I think I’d better get a bit more practice just putting one foot in front of the other before I go for the four minute mile.

Sometimes, discretion really is the better part of valour.