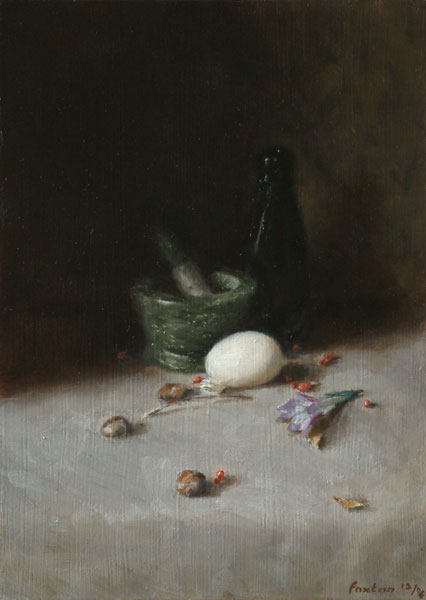 A bit of a departure, this one.

Firstly, it’s quite big for me, almost the size of a proper painting.Secondly, it’s got more than three colours in it.

This one is a reprise of the originalduck egg still life tonal painting in rawumber and white, but with a few bits and bobs added to introduce a little colour. Actually, this is the sameegg. I must remember not to make an omlette out of it, I’m pretty sure that it’s contents will beless than appetising by now.

Although I’ve been keeping to a strict palette lately, rarely using more than two colours and white atonce, I haven’t been missing the colour. It’s quite amazing what you can get out of a drastically reducedpalette, and also how much you can learn from doing it. So this one hasn’t got more colour because I wasmissing it, it’s because it’s a present for someone, and I thought they might not appreciate a completelygrey painting.

As should be fairly obvious though, I’ve still kept the colour very muted, and only added it to a few objects.The bulk of this one was painted with burnt sienna, raw sienna, ultramarine and flake white. The only othercolours are some cadmium red light used on the berries, a small amount of raw umber on the egg, and some alizarinmixed with the ultramarine for the flower.

One thing that I found interesting with this painting is how much I knocked back the colours to get themto work in the picture. The colours of the berries and the flower weren’t added until everything else wasalready roughed in, so the overall colour and tone was already set. When I looked at the berries to paint them,I immediately went in with a much too intense red. They just didn’t work in the picture.

To sort it out, Itook some grey made from burnt sienna, ultramarine and flake white and then added the cadmium red light until I thoughtthere was enough. It took hardly any, and the colour looked distinctly grey on the palette. I think it worksfine in the picture though, anything brighter just wouldn’t sit right and would distract from the egg. In a way,this painting was an exercise in making sure I never lost the focus on the egg. Despite adding more colour, Iwanted to make sure that it still stood out as the main subject of the painting. It’s the lightest part by along way, and everything in the composition is designed to lead the eye to it.

Of course, it could just be that the colour looked too intense to me after all the grey and brownpaintings I’ve been doing lately, but I think it’s more than that. Working with tone has shown me that it’s muchmore important to make the tones work right in relation to each other in the picture than it is to match them to whatI see. Some brighter tones can’t be matched anyway, and it was struggling with that problem which brought me to theway I work the tones now by trying to preserve the relationships between them rather than trying to copy what Isee.

I’m beginning to think that it may be the same with colour. Once the logic of the tones is set up, and thegeneral colour environment is established (in this case grey/brown) then everything else has to work within thelogic of that environment or it will look out of place. Also I think that colours appear much more intense whenyou look at them directly,, like the colours on the berries. A better approach, perhaps, is to try to get ageneral impression of how the colours look against everything else in the set up. In the end, I judged thecolour of the berries by looking at the mortar and pestle, instead of directly at them. I think that may havehelped me to avoid painting them much too brightly, and helped to keep the atmosphere of the picture consistent.

Regardless, this kind of colour is really outside of my remit right now. I’m still working primarily with anearth palette, and intend to keep doing so for some time. That’s partly because I’ve been completely seduced bytone in a way I didn’t expect. Keeping the colours muted makes it easier to concentrate much more on the tones,which, for the moment at least, my paintings are mainly about. I’ve always been very interested in the light,in trying to catch something of the feeling of it hitting the objects. I’m finding that concentrating on toneis allowing me to get that much better than all my attempts at matching real world colours.