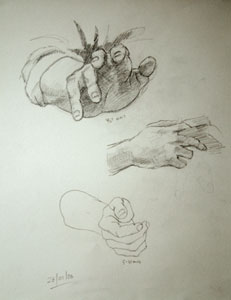 Today (the 26th) was pretty productive. Four more drawings for thetwenty hands series, and the beginning ofa new self portrait drawing. It was one of those days when I felt fired up and just had to draw something, eventhough I had other stuff I was supposed to getting on with.

Not all the drawings were particularly good today, but I did enjoy doing them, and it felt good to make someprogress through the current series.

I fancied trying to stretch myself a bit more today with the hand drawings, so I went for more drasticallyforeshortened angles than I’ve tried up till now, with mixed success. I obviously need more practice withforeshortening. I guess its something we all struggle with sooner or later.

Hand number seven was a quick sketch,just outline, drawn in the mirror. No roughing out on this one or planning,it just came out this way. The fingers look ok I think but not too happy with the thumb, the most foreshortened part.Instead of coming out of the paper towards you, it kind of disappears. Not too sure why, just not very wellobserved I guess. The line is very even in intensity, which is a shame. It would have been a nicer drawing if I’dvaried the weight of the line more since that’s all there is to this drawing, but I was seeing it more as a warm upexercise than anything. From that point of view it did its job.

Hand number eight was alsodrawn in the mirror, and whilst it comes out of the paper more, its what I wouldcall a lazy drawing. Again its just not very well observed and overall looks like I wasn’t really trying.The thumb, index and ring finger are not too bad but the little finger and the one next to it(is there a name for that finger?) look like they’vebeen borrowed off a joke rubber hand and stitched on. Not good.

Hand number nine is a copy of an old masterdrawing, the original is by Polidoro Da Caravaggio, a sixteenthcentury Italian artist who was a pupil of Raphael’s. This drawing is not great and a bit lazy, with a rubber ringfinger. To be honest though, that finger is a bit rubbery in the original too, although the form is more clearlydefined than in my slightly rushed copy. I chose this one to copy because of the interest given to the sketch bythe fact that its holding a book.

Hand number ten is the best of today’s bunch. I spent a bit more time on this one, and was more warmed uphaving just done the previous three. Copying hand number nine did give me the idea of holding something thistime, it makes for a better drawing. The bones and muscles flex more and create more interesting shapes, I’lldo some more like this, holding various objects to see what it does to the hand. As with the other drawings, themost foreshortened part, in this case the index finger, isn’t entirely convincing, but its the only part ofthe drawing which shouts at me as being wrong. The tones came out quite nice and it has some life I think. 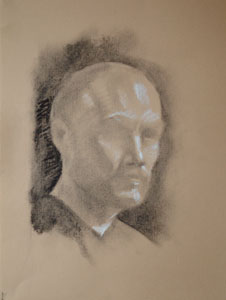 I also started a self portrait drawing in charcoal between hand numbers nine and ten, but the light caught meout. Rather than rush it to finish in the failing light I decided to continue with it later. I’m much lessbothered now about holding an exact pose for these self portraits, since I know that it won’t be like that whenI come to draw other people more, they’ll move more than I habitually do when I’m drawing, so its good practiceto do the same myself.

Overall its not a bad start I think, it looks like everything is pretty much in the right place and I haven’tfixed it yet so I can still push the charcoal around in round two if need be. I hope to get back to it tomorrow, but Ihave a lot of work on so I may have to finish it at the weekend. This will be the first one I’ve done over twosittings, so it’ll be interesting to see if that makes any difference.