Framing. It’s a ticklish business. I hadn’t given all that much thought to framing until I had to get these two paintings properly presentedrecently.

But the experience of getting them framed has shown me that the frame can make or break apicture. 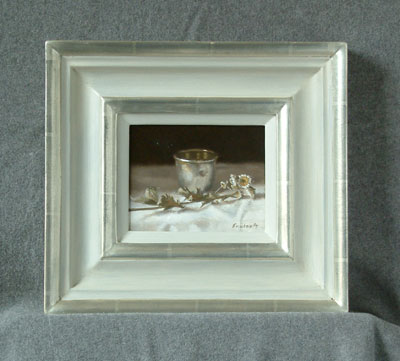 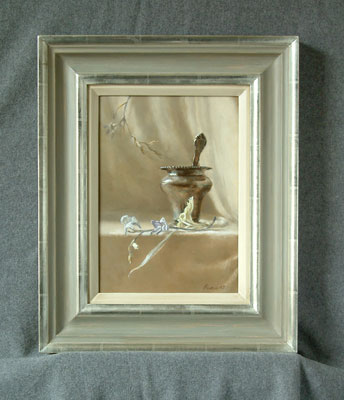 I would never have thought that the type, character, tone and colour of the frame could not justmake a difference to the overall impression, but actually affect what you notice in the painting and whatyour eye skips over. Even affect how the composition works. Scary.

But that’s exactly what I found when I went to a framer to get these two done.

Before we go any further with this, lets get one thing clear: There’s bespoke framing, and then there’sReal Bespoke Framing. What’s the difference? Well, some framers, of the common or garden high street variety,will call what they do bespoke framing. What they mean by that is that they’ll help you choose a molding fromtheir selection of (probably) machine finished, off the peg examples that best fits your picture.

Then there’s real bespoke framing, of the variety that I’ve just been lucky enough to find. I had thesetwo done at a Bespoke Framers in Surrey, pretty local to me, calledMandry and Norris (or Chris and John once you’ve got to know them).Their web site may not look like much, and they don’t have a salubrious shop front with polished sales staffeither. What they do have is excellent service, the highest levels of craftsmanship and an attention detailwhich I think is pretty rare to find these days. So I’m letting the world (or at least the small part of it thatvisits this site) know about them. These guys are thereal thing, master gilders, and if you live anywhere near them I suggest you give them a try. I’ve been deeplyimpressed.

On my first visit, we talked about different types of moldings, from traditional carved to contemporary,and tried a few samples against the paintings. That was pretty interesting for me, and I learned a smattering offramer’s jargon so now I feel all clever and that. These two frames are what they call ‘primitive’ moldings.I know they don’t look very primitive, but the word refers to the time that these types of designs were firstused. Unfortunately I can’t remember exactly when that was, so now I don’t feel quite so clever, but I believethat originally they were Dutch and started being used around the 1700’s. The ornate carved ones are more fromthe nineteenth century. Interesting, because since these designs are less ornate, I think that they lookmore contemporary that the carved variety. But with class.

Enough about moldings. It was on my next visit that things got really interesting. With Chris’s advice,I went for white gold leaf. So all that was left was to decide on the colours for the panel sections, whichare painted. Chris had already done them by the time I got there, but he then spent the whole of an afternoonwith me, trying different colours directly on the frames, with the paintings in them so I could see exactlyhow they worked. We went darker, we went lighter, more colour, less colour.

What really amazed me is that both the strength of the colour on the panels and the tone, even when thechanges were very subtle, made the paintings look different. A darker tone on the panel of the silver vasepainting made the vase stand out more, and the flowers all but disappeared. A lighter one brought them back.Because the colour in this painting is very subtle, as is the tonal range, it was a hard one to get right.A touch too much colour on the panel and the painting looked insipid, and the hanging flowers at the topleft disappeared. That was bad, since they’re an important part of the composition, designed to lead the eyeback round to the vase again after teaspoon has lead it up to the top of the painting.

When we’d finally decided on the colours (I let myself be guided quite a bit by Chris’s greater experience,which seemed the sensible thing to do) it was on to final finishing. I thought they already looked lovely, butthis is where the magic happened. The frame for the Christening cup was finished with a dark brown wax overthe light grey paint. The effect was subtle, but it gave it a certain warmth and depth, and just added a touch of- well, class. The silver vase panel was finished with clear wax, over which was rubbed some powdered pumice.

These finishing touches were subtle, yes, but they made all the difference, and Chris chose what he thoughtwas the right finish for each one. I must say, the photos don’t show these subtleties, and quite honestly don’tdo the frames justice by a long shot. But this really was a bespoke service. Bespoke in thateach frame was finished for the picture it was intended for. The colour underneath the wash of the silver vasepainting exactly matches the colour of the darker parts of the vase. It’s been covered with a wash, but it stillinfluences the final effect.

A last word on the paintings to close this post. The Christening cup painting is a reworked version of theearlier Dried Flowers and Silver. I’ll postsome better shots of it soon. The Silver vase is a new one, and I’ll be doing a good long post on that one shortlybecause the approach was very different from usual, and greatly influenced by my experience at thepainters’ technical course in the US.

The reason that I’ve gone to such lengths with the presentation of these two little paintings is that I’veentered them for theRoyal Academy Summer Exhibition.Whether they get in or not, I’m happy that I’ve dressed themup as best I can, and Chris and John have done a fine job. The rest is in the lap of the Gods.