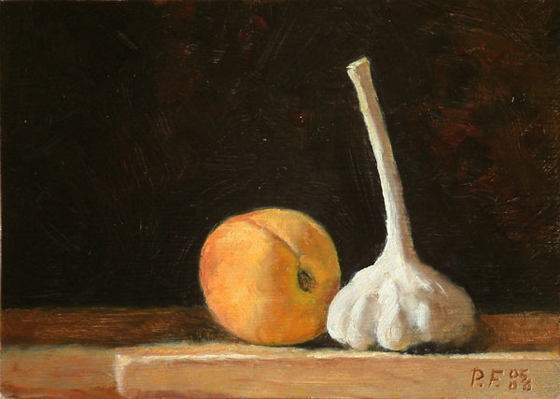 This is the second of the ten pairs of objects series, andagain features the garlic centre stage. Support role this timeis taken by a peach which is unfortunately past it’s best,but it made it through the painting. Well done peach.

This one was done sight-size again, standing about four feetback from the easel. Working sight-size had most effect on thisone in the initial stages, when I was drawing the painting outand did a lot of visual checking. After the last painting I’d mademy mind up to rough out the whole painting in tone first this time,using medium mixed with the paint and letting the ground show through.The plan with this one was to use opaque paint only in the areas infull light, and paint the rest, the shadows, by putting colour intothe grey-toned shadows. No white was used at all in the shadows,just colour dragged into the under painting. I was careful to makesure I didn’t load the paint too heavily in the shadows so thatthey didn’t become opaque. This is more of an ‘old master’ wayof working than I would usually use, except that the painting wasstill done in a single sitting. The point of paintingtranslucent shadows where the glaze lets the brush strokes of theground show through is to give the shadows more depth, and make theopaque light areas stand out more. I’ve pretty much got this ideafrom reading “Rembrandt’s Eyes” by Simon Schama, which describessomething of Rubens’s and Rembrandt’s technique, and from a bookcalled “How to Paint Like the Old Masters” by Joseph Sheppard.

Sheppard’s book has some good information on mediums, includingsome recipes for mediums intended to be similar in use to the onesused by Rubens, Rembrandt, Caravaggio etc. It also has some in depthinformation on how these painters built up their paintings, or atleast how Sheppardthinks they probably did it. I’ve been reading up on Rembrandt andRubens in particular, and both their techniques centred aroundstarting with a grey ground, then glazing in the shadows. Then theywould start to paint in the light areas, differing here because ofthe way Rembrandt used to build up thick impastos of white which heglazed over and then rebuilt multiple times.

Shadows have been bothering me for a while, I can’t reallyseem to get them to work well in opaque paint, even when the tone is right. Sothis painting was partly intended as an experiment to see if adifferent way of working, based more on Rembrandt and Rubens’sglaze technique but in an alla prima style, could give me moreconvincing shadows, and a stronger feeling of light. It’s the light Iwant to catch more than anything. I can worry about details when I’vegot the light looking right. 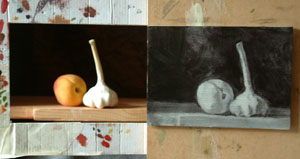 Here’s the painting after the initial under painting stage is done.This took about an hour. This was done somewhat like aBargue drawing, sighting across from the set-up to the panel, pickingthe point to be marked, and stepping over to place the mark on thecanvas. The shapes of the garlic bulb and peach were drawn in as negativeshapes. The paint is very thin, and is mixed with the Roberson’s maroger.It had a kind of sticky consistency as it went on, much of this was donewith the brush very dry, scumbled on and then rubbed in with my fingers, orcut back and rubbed out with a cloth. It was a nice way of working, verycontrolled and very like working with charcoal and a rubber. 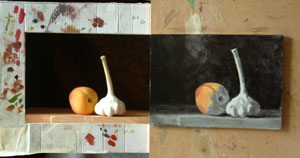 Here it is at the next stage, painting in the areas in full lightwith opaque paint.

Once this was done I dragged colour into the shadows, brown for the shadowson the wood, orange for the peach, and a greenish brownish grey for the garlic.I did the least with the garlic, it didn’t seem to need much.

It struck me whilst I was working on this one today that I was havingto do a lot of work putting colour into the shadows, which were predominantlybrown, which I wouldn’t have had to do if I’d done the under painting withbrown in the first place. For the next painting I’ll do that, and we’llsee how much difference it makes. It should make the painting warmeroverall. I guess it would make sense to do it with burnt umber or sienna, butI only have my six colours, so I’ll see how close I can get to mixing a burntumber with my limited palette. I think it should be possible.

This way of approaching and building up a painting worked pretty well forme today, I felt comfortable with it and I think I’ll be able to produce betterresults once I get used to it. It should be directly transferable to portraitpainting too. I plan to spend the rest of this series practicing this method.Hopefully before I finish the series I’ll be trying out some home-made mediums,but in the mean time I’ll keep trying out the three I’ve used so far.

Of the three, my initial impression is that the Roberson’s maroger is myfavourite, but I need a bit more experience with them all to be sure. One thingI am sure of is that I like painting with medium. It keeps the paint undercontrol, something I have a lot of difficulty with usually, and it allows meto do things, like translucent shadows, that I don’t know any other way to do.