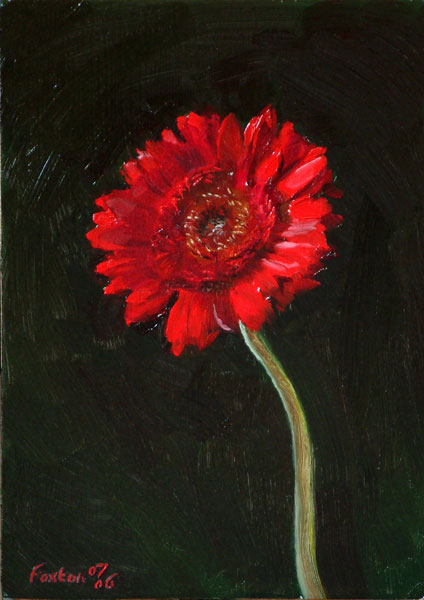 This is the fourth of the series of ten flower paintings, and the first painting for July.

I simplified things for this painting, working very small again, and keeping everything out of the picturebut the main subject. No bottle, no bowl, no vase, nothing to distract me from the flower. For this paintingI wanted to make a special effort to match the tones and colours, but particularly the tones.

I’ve been thinking about tone a lot more lately. I’m slowly coming to realise that it isn’tpossible to completely match what I see with what I paint, especially when it comes to tone. Unlessmy lightest light, pure white paint as it appears on my panel, is as light as the lightest light onwhat I’m looking at, I’m going to struggle with getting a convincing feeling of light if I matchthe tones where I can.

Say I’m painting a white flower in natural light. The lightest light on the flower will be on theplane of a petal directly facing the light. Unless my panel is also facing the light, at the same angle asthe petal, my lightest light will be necessarily be darker than the light on the petal. That means thatthe full range of tones at my disposal, from my darkest dark to my lightest light, is narrower than fullrange of tones on my subject. Another thing I’ve noticed already in this series is that opaque oil paintsimply can’t match the intensity of the some of the colours on flowers.

I suppose there’s a scientific explanation forthat, but this comes from direct experience. If the best quality, highest pigment oil paint I can buy can’t matchthe intensityof a given colour in nature, then it’s my assumption that it can’t be matched in paint. I don’t think there’stoo many colours like this, intense reds and yellows perhaps, but they’re out there, and if you paint whatyou see and try to match those colours you will come up against this problem sooner or later.

I generally try to paint what I see, to match the colours and tones I see as closely as I can. But unlessI always paint with my panel in full light, I’m going to hit a glass ceiling with my lights when I can’t go anylighter, and the lightest range of my tones will get flattened out where they should be able to go that bitlighter. It’s like putting a low pass filter on the tones in the painting. Don’t even get me started on tryingto paint light sources like the sun, or an electric light. It simply can’t be done. You may be able to createa convincing effect of a light source, if you’re good enough, but you can’t match it.

More and more I’m thinking that the painting has to follow it’s own logic for tones, and that what’s important is the relationships between the tones. I’m beginning to thinkthat that’s what creates the natural, convincing feeling of light I want, not matching the tones exactly. 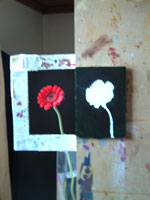 So I approached this painting a bit differently. First I put in the background, my darkest dark. I’m working straight onto the white acrylic primer with these flower paintings, to keep the colours purer and more luminous. Because of that I had to lay on the background thick enough to completely obliterate the white of the panel.

Here it is at this stage. I’m also using the framer again for this painting, so as to make it easier to concentrate on the tones and colours of the flower. 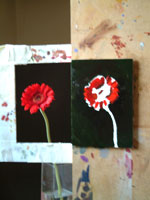 This is the next stage. I was working very carefully and patiently here, laying in colour notes and beingcareful not to think about the shape of the petals, to stay away from detail.

The part I was particularly thinking about was the lightest part of the flower, the petals on the right, in full light. The colour here was very bright, I wasn’t confident that I was going to be able to match it. I decided early on that I was going to use pure cadmium red for this area, my highest chroma red. Although the colour was slightly more orange than the actual colour of the flower, if I matched the hue more closely then I’d lose the intensity. So I decided to live with the difference in colour for this painting, so I could keep the intensity of the colour. This is a big change for me. UsuallyI obsess over matching the colours as closely as I possibly can, but today I decided to try a live experiment and see what came out.

When this pure colour accent had gone onto the panel, I could immediately see that it was not as brightor as intense as the same area on the actual flower. I sat down for a bit to think about how I was going todeal with that. I’ve come across this same thing many times now. In theOrchid painting I solved it (or fudged it,) byrunning down to the art shop and getting a couple of tubes of high chroma magenta. But I’m already usingcadmium red, so I can’t get a higher chroma red. Today I can’t fudge it.

In the end I decided to work with what I had. I would take that patch of pure cadmium red as my highestchroma, most luminous area and relate everything else to that. Using that as a reference point, I would relatethe other parts of the flower to it, rather than matching them exactly to the actual colours and tones of theflower. Thatmeant living with it being darker in tone overall and a slightlydifferent hue, but shouldmake for better balanced tones in the painting, for a better impression of the light. At this point I had noidea if it was going to work or not,but that’s part of the value of working in series. If this one falls on it’s face, then I’ll just learn thelesson and move on to the next one.

After this point I just continued painting, not thinking about it too much, but trusting my eye torelate the parts of the flower to this part in tone. I think it worked. Overall my painting is slightlydarker than the actual gerbana I painted, and it’s slightly the wrong colour, but it still has life, andmost importantly, I can feel the light.

I wonder sometimes if the people reading what I write here (if anyone actually does,) think I get tooobsessed aboutthis stuff, that should I just get on with it and paint. I think that myself sometimes. But to me this goesto heart of what a painting is, at least the kind of painting I do.It’s an illusion, an abstraction. Painting, like drawing, is a process of selection. All the time you’redeciding what to leave in and what to take out, and how the painting turns out, whether it’s asuccess or not, will be largely governed by those choices.

What I’m trying to do is to catch the light, to create a convincing feeling of the light in the painting.If I do that then the painting will have more reality, more life. Because when we see something, all we reallysee is light reflecting off it. If I catch the light, or get as close as I can, then maybe I’ll be lucky enoughto catch some of it’s beauty too. It doesn’t always work out, in fact mostly it doesn’t. But this time, for meat least, it did.

Thinking about tones and relationships between tones, and how my available tonal range is smaller than whatI see in nature, has made me realise that this is going to be an important part of what I do. There’s a lotfor me to learn here. I’m planning a series of still life drawings, just in tone, to help me deal with thisin a more simplified way. This painting taught me a lot.