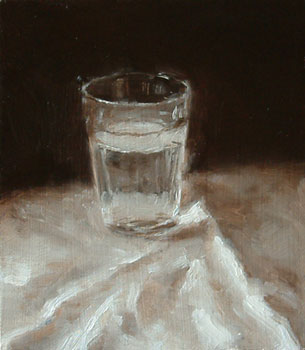 This is the last of the tonal studies for November, and also the last (for the time being at least)in burnt sienna and ultramarine. I’m starting December with a brand new palette: raw sienna andultramarine. Now don’t get too exited, I know it’s a big change, but I must be brave. I think I canhandle it.

As these studies go, this was quite a quick one, taking about three hours. The subject, of course,is largely monochrome, giving me the chance to play with the subtleties of warm and cool greyswith no distractions from local colour. White cloth has proved to be my Waterloo on more thanone occasion, so reintroducing it now is kind of a test for me, to see how far my study of tone andthe warm/cool balance has come.

Throughout this study, I’ve tried to keep to cooler greys where the planes are facing towards the light,and warmer ones with more sienna added where the planes face away from the light. Between the two, the flatplanes of the cloth, are kept mid grey. I was hoping that sticking to this logic would help to show theforms of the folds in the cloth, along with the changes in tone of course. The lightest highlights are laidin with almost pure flake white, which is warmer than the cool light greys, but the tone is lighter.

Overall I think it worked out ok, but the cooler greys with the ultramarine are really not that muchin evidence, the painting turned out generally rather warm overall. I’ll be keeping this in mind tomorrowwhen I start my first raw sienna/ultramarine painting.

This is also the first time I’ve (rather clumsily) used a technique known as ‘halation’ – allowing thecolour or tone of an object in light to bleed over into the shadow areas, supposedly to intensify thefeeling of light. I’m very suspicious of halation,largely because I very rarely notice it in nature, and because 99 times out 100 when I’ve seen it done inpaintings, it looks awful and forced. But I could see it to an extent when I painted this. At first I put itin very subtly, so I could hardly see it. The problem was that I could hardly see it, so I overstated alittle, perhaps too much, just to see how it would work. To be honest, I quite like it, even though I haven’tdone it very well. It’s kind of an extension of the softening of the edges which I find myself increasinglyconcentrating on these days. I’ve left too many hard edges on the glass I think, but I’m happy with thefeel of this study. I think I’ll be returning to this subject at some point in December.

The white cloth has come out better than usual, although I’m less than happy with the texture of thepaint there. It always seems to happen that when I’m concentrating on one thing (in this case warm/cool)I lose something else. Overall the handling of the paint is rough too, something which I’m becomingincreasingly annoyed by.

So December, apart from being defined by a new palette, will also be defined by more white cloth,hopefully better and more careful handling of the paint, and more time spent on each study. At least that’sthe plan. If it doesn’t go that way, I’ll quietly pretend I never wrote this.