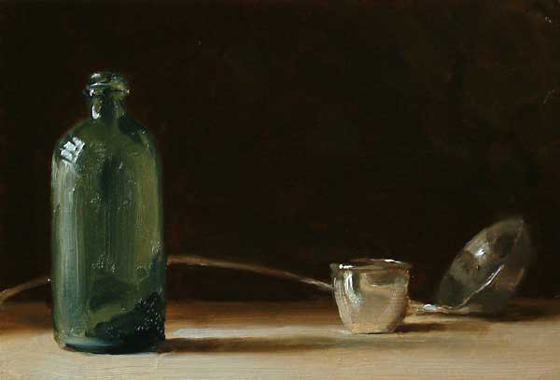 This little egg cup is rapidly becoming one of my favourite things to paint. The nice thing about silver is that it takes on the tone and colour of everything around it, so the variations are endless.

The bottle is another recent addition from the collectors shop. The ladle was quite a find I think, I like the way the curved handle works as a design element n the picture. I’m intending to do this one as a larger, more finished painting at some point.

This is another limited palette study, although slightly expanded from the two colour and white palettes I’ve been using a lot lately. This one has four colours in it. Four! I had to watch I didn’t get too exited with all those colours on my palette at once.

For this painting, I used only raw sienna, raw umber, yellow ochre and ultramarine with the usual flake white.

Although the palette is bigger than usual, you can pretty much boil it down to yellow and blue, since brown is just a dark yellow in hue terms. The yellow ochre came out because I couldn’t get anywhere near the actual colour of the bottle without it . I’m still a long way off here, but I’m not terribly concerned about it. As long as it works in the picture, I’m happy.

There was a special quality to the light when I painted this which I wanted to catch, something of the feeling of late afternoon winter light.

Although I started it in the morning, most of the finishing was done in the afternoon, and the tones of the objects were mostly laid in later in the day. There’s only about three hours of light in the afternoon now anyway. But there’s a kind of nostalgia to that particular light, a quietness, which I like. Hopefully some of that comes across in this little study.

The challenge will be not to lose it in a larger, more finished version.