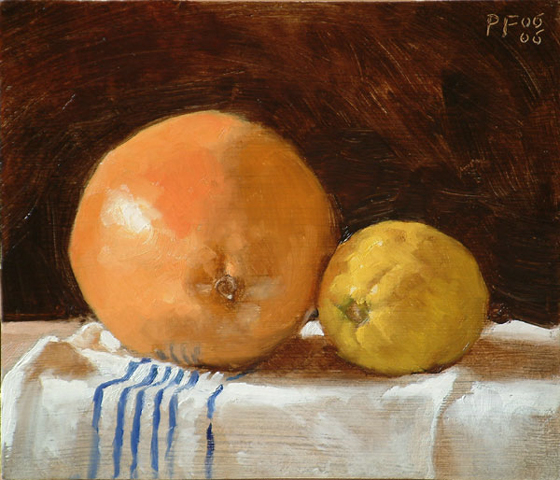 This is the fifth of the ten pairs of objects series, half way through now.

I just got hold of a couple of 100% cotton tea towels the other day, onewith blue and one with red stripes. Thisseemed like a good opportunity to use one of them, and being a fan ofcomplimentary colours I used the blue stripe version to go with the pinkishorange of the grapefruit.

I was particularly looking for 100% cotton because Ithink natural fabrics give the nicest effect in a painting,they reflect light in a more natural way than synthetic fabrics, whichoften have a kind of sheen to them which I don’t like so much. I’ve hadserious problems withlemons and white clothin a painting before, mysecond attemptwas equally dodgy, so this was another test to seeif the way I’m working now would allowme to get a more faithful rendering of those two things. I have to sayI think it did.

The method here was the same as for the previous four of this series:Working sight-size,drawing out first with warm glazes of burnt sienna and ultramarine, opaquepaint for areas with light falling on them, warm glazes with some colour draggedinto them for shadows.The one difference today is that I didn’t use my little framer to set thecomposition. 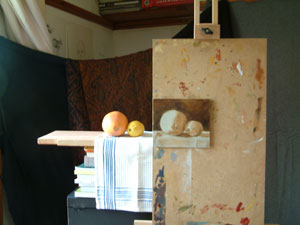 As you can see, no framer. See theplum and pearprogress shots for use of the framer. Why didn’t I use it today? Two reasons:Firstly, I’m beginning to get concerned that I may become too relianton my tools like the framer and the colour checker. Second reason, myframer wasn’t big enough to frame this composition, so I couldn’t use itanyway. Happily it didn’t make a blind bit of difference to the painting, soI think I’m ready to drop that particular little helper now.

As usual though, I’m working sight size, today standing about fourfeet back from the set up. I was much more careful about thedrawing out in this painting, after the forms went a little awry in theplum and pear. I spent well over an hour this time, making sure I hadeverything pretty much in the right place.

As with the plum and pear, this isn’t a tonal drawing out. All I’m doingis putting in the shadows. The grapefruit would have been darker on it’s leftside if this was a complete tonal study, because it’s local colour, theorange/pink, has a tone of it’s own. But that tone will take care of itself whenthe colour of the part of the grapefruit in light goes in, and I want that to beclean and opaque, so I don’t want a glaze there.

Today was another early start. As we get further through the Summer, directsunlight comes into the window earlier every day it seems, so I startedsetting up about 8:00 AM and started laying down the glazes for theshadows about 9:00. This painting took slightly longer than the last one, a littleover four hours. I think this was largely because I spent longer on the drawing out.

From here things progressed as normal. First the main colour for thegrapefruit went in, using the colour checker in theusual manner.This was another of those times when I felt unable to catch the luminosityof the colour I saw. I used cadmium red to mix the pink/orange colourof the areas of the grapefruit in full light, alizarin just wasn’t doing it.Despite that, I couldn’t quite get it. Although it works fine in the finishedpainting, I’m left wondering what else I could have done to increase theluminosity of the colour. The only thing I can think of is to overlayglazes loaded with a pure orange when the paint is dry. I may try it, butI wont have the subject in front of me when I do it so I’m a bit reluctant tomess with a painting which I think is already working. Sometimes you reallyneed to know when to leave well alone. A better idea may be to try a fewexperiments with the technique first before I mess with it on a reallive painting.

One of the things I’m most happy about in this painting is the cloth, itlives much more than any white cloth I’ve previously painted, and yet tookvery little work. When it came to laying it in I already had the grapefruitand the lemon living pretty well, all I had to do was make sure I didn’truin the painting (a distinct possibility when I’m holding the brushes.)Thankfully, as soon as the lightest parts of the cloth had been laid in bydragging some flake white over the toned ground, I could see it was going towork fine. In fact I did very little beyond that, apart from laying in theblue stripes. Building up a painting this way, with the shadows glazed inover the grey ground, means that something relatively simple like a white clothpresents no real problems, only the highlights need to be added. The shadowswere left almost completely as they were.

But I have a confession to make. When it came to the shadows on the cloth,I didn’t try to paint exactly what I sawtoday. I’d put in the shadows cast by the grapefruit and the lemon fairly warmto start with, using a higher percentage of burnt sienna than ultramarine. Althoughtowards the end of the painting I could see that these shadows were cooler thanI’d got them in the painting, I left them as they were, warmer that they werein reality. It was just that they were working fine as they were, and weregiving the painting a nice, warm glow. I didn’t want to lose that even though itwas a mistake, an accident if you will. If it aint broke don’t fix it. But thisis the first time I’ve left something that my eyes were telling me was wrong, andthat I could have easily fixed. I left it for the good of the painting.

This has got me thinking. Although my overriding concern has always been, andwill continue to be, to paint what I see as faithfully as I can, I’m aware that there aresome things in nature which simply can’t be matched with paint. A painting is a formof artifice, an illusion of reality. In this case that particular part of theillusion wasn’t hurting the feeling of the reality of the cloth or of the fruit,in fact it seemed to intensify the light, so I left it. I’m not entirely sure howI feel about that yet.

What I do know is that I’m happy with how this painting came out, with howthey’re all coming out lately. Previously, when a painting came out withsome feeling of the light, like I think theCarrots and Squashhad back in November, (at least in comparison to the other paintings I did at the time,)it seemed to be as much accident as anything else. I had a lot of times when Ifelt I wasn’t getting anywhere, when I’d follow up what I though was a decentpiece of work with some that I was much less happy with. But for all the paintings ofcurrent series, I can see a consistency now which wasn’t there before.

It would be worrying if that didn’t happen sooner or later of course, but all the sameit surprises me. I’m a little wary of allowing myself to believe that I’m gettingbetter, it feels almost as if I’m tempting fate. But I do think thatI can see some improvement now, especially lately. However, nothing kills progress likecomplacency, so I’ll continue to work to improve, to try to get a more convincingfeeling of light because that’s my main concern.

I know there’s still a long way to goyet, but I think that now I’m going to allow myself at least some sense of achievementat the small amount of progress I’ve made. What progress I can see is entirelydown to, and proportional to, the amount of practice I do. More practice = betterpaintings, a tune my regular visitor will be used to hearing me sing. But it’s niceto have that conviction vindicated, even in a small way, at this point in myjourney. If anything, I’ve been practicing less lately, I’m acutely aware of how littledrawing I’m doing at the moment. Life has got kind of complicated recently, and I’vebeen giving in to stress and a certain amount of melancholy. I plan to make an effortto stop that from getting in my way for the rest of the month, I’ll see how I’ve doneat the beginning of July, because it isn’t going to go away any time soon.