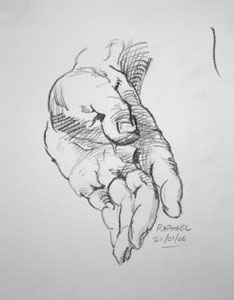 This one is a copy of a drawing by Raphael.

The original is done in ink, so I used only a 6B for this one, hoping to get a similar depth to theline.

I can’t say its a very close copy of the original, but I don’t mind. Copying an old master drawinglike this makes you study the original in much more detail than you would when normally look at a drawing,and helps you to learn something about the approach used, which I think can be of benefit.

A few things struck me about Raphael’s technique when I was copying this drawing. Firstly, the outlineof the hand isn’t drawn like I draw my outlines. In my hand drawings, I make sure that the outline lookspretty much like one continuous line by the time the drawing is finished. That’s not a conscious thing,they just come out that way. The outline of my hands isn’t drawn as a continuous line, but when I move to thenext section of the outline, I make sure the start of the new part of the outline matches up with the endof the part I’ve just finished, by and large.

In Raphael’s drawing, the outline is made up of a series of discrete lines, you can see the start and endof each one. On the fingers, each of the three joints of the finger is drawn with a separate curve, done in onego. I’m thinking back to hand number four and hand number five while I write this, and actually I think Idid something similar, drawing the curve of the edge of each joint in a continuous line. But this mainlyhappens in the roughing out stage, when I’m drawing very lightly. Once I had the overall shape of the handroughed in, I then went in and restated the outline more heavily, with more attention to detail.

Raphael doesn’t appear to have done any roughing out at all, it looks like he was sure enough of theposition of each line to draw it once and then to leave it alone. But, you know, he was one of the greatestdraughtsmen the world has ever known so I don’t feel too bad about having to rough out my drawings first.

The second thing that struck me was the frequency with which he uses the ‘S’ shaped line to describe theoutline of each part. I dimly remember this from when I did my art ‘A’ level the first time round (it took metwo goes to finish mine,) and we covered some art history. Apparently, if I remember right, the ‘S’ shapedline was considered to be the line of beauty.

Raphael was concerned with producing idealised versions of nature, something the Greeks were very big on,and so were the Romans after them (since Roman art was heavily influenced by ancient Greek art). Because theRenaissance, in art at least, was largely concerned with a revival of the idealised naturalism or realism ofRoman and therefore Greek art, Renaissance artists and architects used techniques which were supposed toallow then to create beauty through idealised forms of nature. Thegolden section is one of these. So isthe ‘line of beauty’ (you can see one on the top right of this drawing). I think Hogarth is the best knownwriter about the line of beauty, but he borrowed from early Italian writers. Of course I could be wrong,I’m thinking back twenty years or so. But the fact remains that the majority of the outline of this drawingis built up of different versions of this line.

What all this means for me (or any one else learning drawing) in practical terms I’m not entirely sure.I’m certainly not going to start trying to introduce this line deliberately into my drawings. there’s been alot of water under the bridge since the fifteenth century, and I’m not trying to produce an idealisedversion of reality. I’d be happy enough to be able to get anywhere near reality at all at the moment.