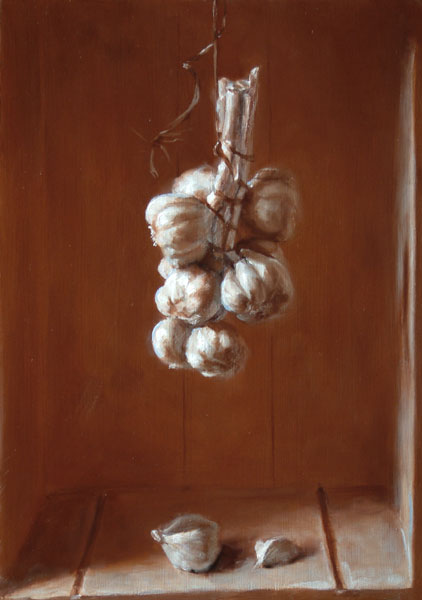 This is the more finished and larger study of the garlic bulbs, for which thesmall study was donethe day before. It’s the second painting done with only three colours – burnt sienna, ultramarineblue and flake white. That might seem a bit limited, but after seven paintings done in just raw umberand white, it feels like a rainbow to me.

Done over two days, this one is part of an increasing number of slightly larger studies. Workingsmall for the best part of a year has been good since it kept the paintings manageable, and preventedme from getting too hung up on them and spending forever tweaking, which I think would have slowedprogress, but I do feel the need to stretch a bit more now.

I had a very clear idea of what I wanted with this painting. I wanted to use the warm andcool contrast to create the strongest feeling of light and depth I could. I was quite prepared to sacrificeliteral copying of the subject for that to happen, I wanted to get the glow of lightcoming off the garlic bulbs as strong as I could with my limited means. In fact I intended to paint it wrong,so to speak, in order to try to use my two colours and white to create a convincing impression of thelight andthe space around the garlic bulbs. Having a clear idea of what you wantfrom a painting makes it much easier to disregard unessential things and concentrate on your goal. I thinkit produces stronger pictures. But although I had a clear goal, I hadn’t the faintest idea how I was goingto get there. I had to feel my way slowly, almost stroke by stroke. 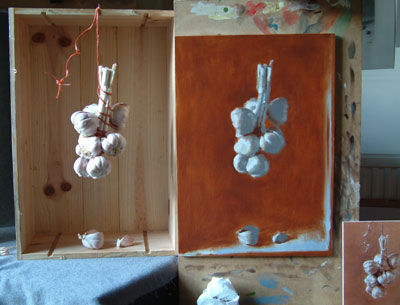 This picture shows the painting some of the way through day one.At this point, it’s just a statement of themain tone blocks, the lights and the darks, as I would usually do in a tonal study. But this time there’sthe added complication of the colourchoices afforded by the slightly expanded palette. As I said before, my three colours may not seem like much, butin fact they have a surprisingly wide range, which I hope to explore with a series of studies like this.

Down in the bottom right of the picture is the little study, I wanted to keep it handy as a reference, butin fact I’ve already departed from it in the larger version. Apart from including the sides of the box, I’vemade the background tone much darker. Although it appears to be a darker tone than it actually is in thesubject, (it certainly did to my naked eye when I was painting it), this is part of my relative toneapproach. My white is nowhere near as light in tone as the actuallights on the garlic, there’s no way I can match that with my paint. Especially since I’ve mixed a littleultramarine with my white to emphasise the warm/cool contrast. Flake white on it’s own is a fairly warm white.What I’m really after here is the contrast in tone between the background and the light tones of the garlic onthe left. I want those lights to bang out of the picture.

Another thing worth noting about the background is that it’s laid in thin at this point, over a whiteground (I forgot totone the panel the night before as I usually do). This translucency makes it appear much warmer than it wouldif I’d painted it a similar tone with opaque paint. The warmth gives it more depth, and goes some way towardscreating the feeling of reflected light within the shadow area of the box. It seems somehow to make theback of the box recede, even though that goes against the ‘warm colours come forward, cool colours recede’rule. I liked it, but I was in a quandary.I’m trying to stick to opaque paint only at the moment, the thinking being that doing so will train me to getthe most I can out of the colours with opaque paint only at first. Adding translucency greatly increases thedynamic range of colours, so I’ve been planning to add that contrast later in the series, once I’ve got morepractice under my belt with the warm/cool contrast and improved my handling of opaque paint. One step at atime. But I like the depth that the translucency gives,especially against the grey of the garlic.

What to do? Being a glutton for punishment, I decided that translucency simply wasn’t allowed and I wasjust going to have to get the best result in terms of depth I could with opaque paint, and stick to theplan.

After having painted the background twice and wiped it all off again twice, I started thinking thatmaybe that wasn’t such a good idea. Whatever I did, I missed the depth that the translucent paintgave the back of the box. In the end, I finished day one by painting it as warm a sienna of the righttone I could get, just sienna with some white to lighten it, restated the edges of the garlic bulbs,and left it to dry overnight.

Day two. I decided that I was being overly pedantic about the opaque paint only rule, and I did my firstbit of glazing for some time. No special medium, just linseed oil mixed with a little pure sienna, painted onthinly over the entire background. It did the trick though, the depth returned. After that I worked a bit ofneat sienna into the background here and there to clarify the planes of the box and intensify the reflectedlight inside it a little, and got on with the garlic bulbs and the light areas of the box.This took longer than I anticipated, because there was so much push and pull, adding more blue in thelights, overdoing it, pulling it back. I entirely repainted the garlic bulbs with the grey first, since thatmeant that I could still work wet into wet on them. But the paint did get overworked a few times, and there wasquite a lot of wiping off and repainting.

So really, this painting had quite a difficult and protracted birth, but it was also fascinating to do. I’d made upmy mind that it didn’t matter whether I got a decent painting out of the process at the end, since this was thefirst larger painting with these two colours and white, and was always going to be more of an explorationthan anything else. Despite that though, I have to admit I’m pleased with it. It bothers me a little thatsome of the colours are so obviously wrong. The planes of the box in full light are most obviously notblue, although I’ve painted them grey and blue. All I can say is that without that blue cast, the lightwould not have looked as strong. Without that warm sienna inside the box, the back plane wouldn’t recedeas much as it does from the garlic bulbs. In a more finished painting, I wouldn’t want to state thosecontrasts so strongly I don’t think, but there’s no doubt in my mind that doing so has made a strongerpicture, which is,despite the colour differences, more true to the feeling of light and the form of what I was painting.

Another thing I did for the first time in this painting, something which really goes against everything Iwas trying to do by matching colours with my earlier paintings, was on the light side of the garlic bulbs wherethe edges meet the background on the left. I painted a light blue outline around them, just a slightly darkertone than thehighlights. I can’t pretend for a moment that I could see that blue outline on the actual garlic. But Iknew that the hard edges were flattening the forms, and I wanted to soften them. I didn’t want to soften themby blending them into the background, because I’d done that on the shadow side of the garlic, and I didn’t wantthe same effect on the light side, I wanted them to be distinctly different.

There was a distinct glow to the light coming off the garlic and into the shadow, but I also didn’t wantan overstated ‘halation’ thing going on, mainly because I think that’s difficult to do well, and done badly itlooks awful. I’d read in the Speed book about how an edge of a slighter darker colour with a stronger huecan intensify a colour, and the highlights on the garlic were a very light blue, so the blue outline seemedworth a go. I have to say it works. I don’t know why, and it shouldn’t, but it does.

So it has to be said, in this painting I moved further away than ever from producing a literal copy ofwhat I saw. But it was done in the interests of finding out what can be done with the colours and thewarm/cool contrast, and also in the interests of overcoming the limitations of the paint in order to producea more truthful painting, at least more truthful to the strength of the light that I could see, but couldn’tmatch. To me, it came off quite well.