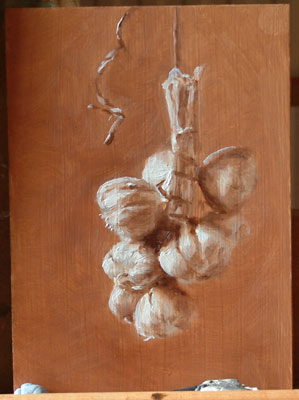 This was just a quick one, and is the first of the tonal studies in burnt sienna and ultramarine(and flake white of course).

Being as the painting that this study was for, theHanging Garlic still life, wasquite a large one for me, and since this was also the first one with a new palette (albeit oneconsisting of only three colours), I thought it would be prudent to do a quick and dirty study first.

What I really wanted to find out with this is how the warm/cool contrast would work. In general,with indoor subjects in daylight, the parts in full light are cooler in colour, and the shadowsseem warmer by comparison. This is why the ‘brown school’ of the baroque painters worked so wellfor portraits and still life paintings. In this way of painting, shadows are generally done ina warm translucent brown, and the colours painted primarily into the lights. The brown gives an overall unityto the picture whilst being based somewhat on the way we see. The lights on an indoor subjectare cool because the light entering the window is reflected from the sky and so has a blue cast. Outdoors,on a sunny day at least, direct lighting from the sun will be warm, creating a cool effect in theshadows – the exact opposite. That’s largely why outdoor portraits and landscapes of previouscenturies are often so unconvincing to modern eyes, because they’re divorced from the way we see.For portraits in outdoor settings, the sitter would be paintedin the studio, with strong light and dark contrast, cool lights and warm shadows, then an imaginedlandscape placed behind them.

The impressionists, of course, threw all that out of the window, painting largely outdoors andwanting a convincing – more real – translation of the effects of light. Before them too, painters like Courbetand Constable had already started to move towards more visual truth in their landscapes. According to HarolSpeed, Velasquez also got away from this to an extent by substituting the prevalent brownfor black in his later years, and produced more convincing outdoor effects. I’ll be looking for this inparticular when I go down to the current exhibition of his paintings at the National Gallery.

But all the same, for indoor still life subjects lit with daylight, the warm shadows, cool lightsarrangement of the old baroque masters holds true. So for this study, I was looking to replicate thatcontrast with my ultramarine mixed into the light for my lights, and my shadows having a large percentage ofburnt sienna.

Garlic bulbs have a very reflective surface, and these particular ones were hanging in abox which was reflecting light back onto them on the shadow side on the right, so that meant a lot ofreflected light in the shadows. I cooled the colours for the reflected light, using pretty much a mediumgrey. I’ve found that once you have a logic oftone set up in a picture, anything that deviates from it will reduce the truth of the picture, makeit look less convincing. I take it to be the same with colour. Once my cool light, warm shadow logic hadbeen set up, I had to stick to it or risk losing the effect, so that meant that reflected light had tobe cool too.

It’s interesting that the addition of new colours to the palette has immediately resulted in aloss of clarity in the tones. Having something new demanding my concentration immediately took my eyeoff everything else. Once I get more used to these two colours and what they can do, I expect the tonesto become stronger again. This is the value of taking out particular elements of painting and workingon them one at a time, I think. Dealing with everything at once is likely to result in nothing beingdone well, at least in the earlier stages of learning. Getting one area, like say tone, wellestablished first gives a good base from which to move on, adding complexities in stages.