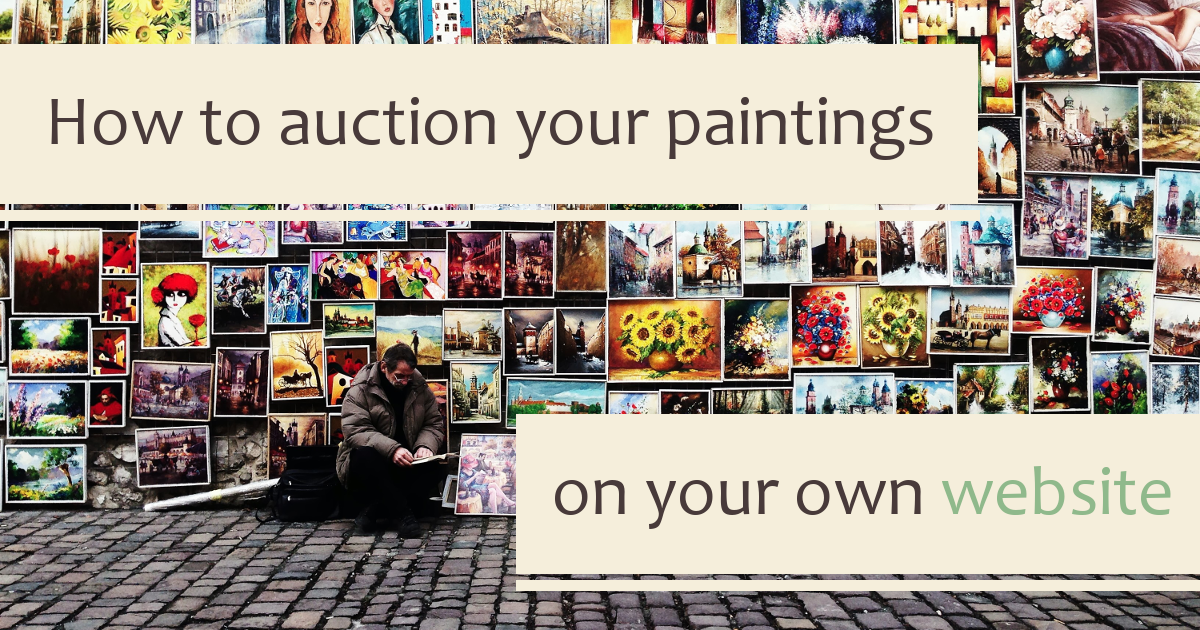 Lots of artists are auctioning their work online these days.

The simplest way to do it is probably Ebay. Unfortunately, you can’t sell internationally on Ebay until you’ve got a certain amount of positive feedback.

I’ve never been an Ebay seller, and most of the people that follow this site are in the US, so when I decided to try auctioning small works, that option was out for me.

You can also sign up for sites like Carol Marine’s Daily Paintworks too, and do it there. As far as I know, they have their own proprietary auction software. You also get the benefit of being part of a community. I’ve never actually tried that so can’t comment, but it’s an option you might want to look into.

But what if you want to do it on your own site?

A really good example is Julian Merrow-Smith. He’s been doing this forever with Postcard from Provence, and I think is up to about 2500 paintings now. His auction software is custom built, though, so unless you want to pay a developer to do it for you, you’ll need to find another solution.

Thankfully, there is one. It’s a little clunky, but it works pretty well.

Setting up auctions on WordPress

If you have a wordpress site, there’s a plug-in you can use that doesn’t need too much setting up and can you up and running with your on auctions pretty quickly.

This plug-in isn’t free. But it’s inexpensive and it does work. If you manage to sell your work, the first painting you sell will probably cover the cost of the plugin.

But before I tell you about that one, make sure you avoid this one:

Before I landed on the one I use now, I tried Ultimate Auction Pugin. It doesn’t work well, resulted in some of the people who bought by paintings getting spammed non-stop with “You’ve won the auction” emails, ad infinitum, and the support is frankly terrible. Save yourself the bother and get one that actually works.

This plugin, WP Auctions, is much better. It does take a little time to set up, but is well worth figuring out.

If you want to make it look the same as the rest of your site, you’ll also need to create a stylesheet for it. It looks serviceable out of the box, but much better if you know enough CSS to style it.

If you’re thinking seriously about doing this and want a step by step tutorial on how to set this up, click here to register your interest. If enough people are interested, I’ll record a video on how to do it and email it to you.

How to actually make sales

Ok, so let’s assume that you’re all set up and can run auctions on your site.

To actually sell the work, you’ll need to be able to reach a lot of people, and that means you need subscribers. Lots of them.

The pioneer of this way of selling work, Duane Keiser, built up a large following by catching people’s attention. He painted huge PBJs that were widely shared on social media, he put out videos of painting an ice cream cone as it melted, and of course, he was the first to really do this so that got him noticed, too.

He uses Ebay to actually sell his work, but he also has a huge number of people subscribed to his site. When he starts a new auction, he doesn’t wait for people to notice it on Ebay, he emails everyone with a link to the auction.

Things really took off for Julian when he got mentioned in the New York Times (let me know if I’m wrong, Julian, but I think that was the one). He’d been selling his small paintings for a year or two at that point, he’s been auctioning them now for over ten years.

The point is, for both these painters, the key to them doing so well now is having a very large number of people that they can contact when they have a new piece to auction. And it’s taken them a long time, and a lot of work, to build that up.

Their work is also excellent, of course. It stands out by itself. I was listening to Carol Marine’s interview on the Savvy Painter podcast the other day, and she mentioned that many people seem to expect to sell their work before they’re really good enough to attract much interest. Her recommendation is to make sure that you’re doing work you’re proud of before you try to sell it.

I’m not trying to put you off. I’m just trying to help you set your expectations realistically.

You don’t have to be huge

As for me, I have about 7000 subscribers following this blog. I’ve built that up naturally and very slowly over time, just by sharing my learning journey and trying to help other aspiring realist painters as much as I can. If I didn’t have a following that size, I doubt my auctions would be doing as well – I only have one unsold panting so far.

To put it into perspective, I’ve been writing on this site for almost ten years. That’s how long it’s taken me to build a following that size.

I can’t tell you how many. A smaller number of really devoted followers might be enough to start. And I don’t think you should let the current size of your audience hold you back.

Just be realistic about your expectations. If you only have a small following on your site, chances are it’s going to be tougher to make sales. You can also post on social media, of course, facebook and instagram. I stick my auctions up on facebook. But the same applies, how many people you reach on those sites will pretty much decide how successful you are.

You know the old adage, the best time to plant a tree was twenty years ago. The second best time is today.

If you want to have a go at this, but you don’t have much of a following, start anyway. Be realistic about how well you’ll do, and do it because you want to paint regularly. That will be enough of a challenge by itself if you don’t already do it, believe me.

I do believe that we’re on the cusp of some major changes in how art is produced and sold, and it’s a very exciting time to be an artist. It’s also very likely that these changes will have a profound effect on the kind of art being produced. Some changes will be good, some perhaps not so much.

But I think that, overall, it’s a very good time to be an artist if you can get to grips with the online world. The great promise is that you’ll be able to support yourself doing the work you love.

For myself, I’m just taking my first steps down this particular road. Sometimes my paintings do well, and sometimes I make less than minimum wage on them.

I’ll keep you updated as I go and share whatever I can that might be useful to you.