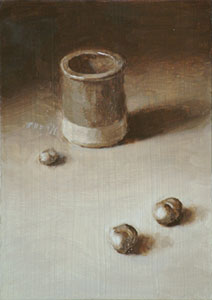 This is the first of a series of still life tonal studies in Raw umber and flake white.After the three red and blue still life exercises, I wanted to get some practice in withrelative tone.

What do I mean by relative tone? Well, it all started with the series of100 still life drawings.That series was started in order to help me figure out the solution to a particular problem:that the tonal range available in painting and drawing is not as wide as the tonal range wesee in nature. That might not be much of a problem for some subjects, but say you’re painting awhite enamelled object in strong light. On the side of the object in light, you’d wanta pretty light tone, in order to show the form and contrast with the shadows.

All welland good. But then what happens when you come to the highlights? On a smooth, reflectiveenamelled surface, those highlights are going to bang right out, they’re going to be a lighter tonethan the side of the object in light, since they’re reflecting white light straight at your retina.But if you’ve already used a very light tone for the main light plane, near the top of your availabletonal range, when you put your white highlights on theywill get lost. You need a definite step in tone between those highlights and the normal plane of theobject on which they’re sitting.

So what’s the answer? Well, you can try just darkening the whole picture, but that just makes yourobject look grey, instead of white. The conclusion I came to through the 50 or so tonal still lifedrawings I’ve done so far is that the answer is to work the limitations of your available tonal range bypreserving the ratios between your tones. So say you have a cube with light from above. You’llhave three planes visible to you, each of a different tone. If you have a range of tones from, say, 1 to 7in nature, but you only have a range of tones from, for sake of argument, 1 to 6 that you can achieve withpaint, you have to find a way to deal with the fact that you’re missing the lightest tone.

To my mind, if you just try to match exactly what you see in all the tones, and accept your glassceiling on the lights, then you’ll compromise the feeling of reality. The highlights, especially, won’t live,and I have a strong feeling that the strength of highlights goes a long way towards showing the texture of asurface as well as creating a convincing feeling of light. The conclusion I came to in the drawings is thatthe way to keep the most convincing feeling of realitywas to compress the steps of the tonal range. I’ve made this cheesy little diagram to try and show what I mean:

The top surface of the cube on the right has had to go darker, because that’s how much darker the white paintwill look compared to white of the top surface of the cube in nature. For the sake of this diagram, I’m assumingthat we can get the same darkest tone, so that stays the same. What has to change is the mid tone. Because the ratio ofthe tones needs to be preserved, it has to go down half a step in order to keep it’s position half way between thetwo. The whole picture hasn’t been darkened, just the mid tone.

Here’s another little diagram which I think is closer to the way this actually works in practice. The topline of tones represents the full tonal range of nature (excepting light sources like the sun, say, this isto represent the range of tones of light reflected off objects). The bottom line represents the compressed tonal rangeavailable with paint. This is illustrated here in an extreme fashion to make the point. So some tones, atthe dark end of the spectrum, will actually be lighter than nature. Butmostly they will be darker, because as I’ve said, I believe that it’s in the light end of the range thatpaint falls most short.

Now of course I’m quite aware that there are infinite variations in tone in nature,and painting it in stepped tones like this would look pretty rubbish. This is just for convenience, to clarifythe concept in my own mind, and hopefully to get it across more clearly to anyone sad or obsessed enough to have readthis far. But in fact, approaching a paintingin the early stages in distinct tonal blocks can be very helpful. Harold Speed recommends doing it in hiselementary tone exercise, which I’ve describedhere. The proof of these thingsalways has to be in the pudding, and all I can say is that this approach works for me. If you’re havingtrouble with tones, try it, it might work foryou.

Of course, this might seem overly technical, but I don’t do it in quite this strict a way when I’m tryingto work this out in a painting. What I’ve started doing now for these tonal still life paintings is mixing up a fewdistinct tonal steps between pure raw umber and pure white, and then filling the main blocks after I’ve put downnotes for my lightest light and my darkest dark. Everything is put in relative to the tones around it.

The most obvious result of this so far in the paintings following this one is that I had to noticeablydarken the tone of the surface which the objects are sitting on, in order to bring out the highlights. It’s my beliefthat it’s the upper end of the tonal range, the light end, where this disparity between nature and paint ismost marked, which in practice does mean lowering the overall tone of the picture. But not willy nilly, therelationships between the tones have to be preserved. So whilst I’m filling in the main tone blocks, I’m alwaysthinking: “Is this tone lighter or darker than that one next to it? What about the one over there?” When all thetone blocks are filled in, I adjust them till they look right before trying to tighten up the drawing andget onto the details.

Now don’t get me wrong, I’m not saying that this is some basic rule of painting that you must follow orproduce terrible work, of course it isn’t. It’s just my solution to a particular problem, at thisparticular point in time. I may find others in the future, or I may decide that this is complete rubbish at somestage, but the point is that this is working for me right now. As far as I’m concerned, when I do this, I geta more convincing feeling of the light. That’s what I’m concerned with more than anything else, and have beensince I started painting again a year ago. I want my objects to pop off the surface of the painting, I want tocreate depth and life, and far as I’m concerned, getting a convincing feelingof light is the best way to achieve that. For me, it’s all about the light.

This painting was done before I started to mix up tone steps on my palette as a way of helping me relatetones within the picture as I’m building it up. I’ve made a mistake in this painting, I’ve got the surfacewhich the conkers and the jar are sitting on as light as the highlights on the conkers. Because of that,the light doesn’t work as well as it might, and the conkers feel less real. I’m writing this after having donefive more of these paintings, and although each one is of objects arranged on the same surface (a light grey feltedcloth), in later paintings the surface of the cloth is considerably darker. Those paintings worked better thanthis one. I think that it’s most noticeable in the painting of thetea lights. That’s the same cloth, under pretty muchthe same light conditions, but it’s much darker. That helps the highlight on the bent in side of the tea light atthe front to work better.