Or start of July update, depending on your point of view. Although I’ve been very lax withsite updates this month, I’ve been working away in the back room, mostly painting, although withthe odd drawing thrown in too.

There’s been another nine paintings since the last update on the 4th of June, bringing me toeleven paintings this month. I’m pretty pleased with that. One of them took 6 days too, so it’s nota bad pace. Drawing-wise, things have stayed quiet. I’ve finished off the series of twenty eyesand finally got back to the cafe today, but apart from that I’ve just been painting.

I think this is the fastest I’ve got through a series, which I guess goes to show how much I’menjoying the painting at the moment. The remainder of the series was a continuation of how I started.Since the first one of this series, theGarlic and Aubergine, I’vebeen exploring technique. A fascinating book by Max Doerner,“The Materials of the Artist and Their Use in Painting”contains, as well as some excellent reference on materials, a discussion of the technique of some ofthe old masters. I’ve been especially interested in the description of the way Rubens built up hispaintings.

Doerner says that Rubens used to work on a grey toned ground, which he textured very loosely withbrush marks, and which would show through when the painting was finished. Rubens used proper gesso toprime his panels, a mixture of gypsum and some kind of glue-type binder. This would give a brilliantwhite finish, which he would then loosely cover with a grey wash, mixed from powdered charcoal, leadwhite pigment, and binder, probably also a kind of glue.

The brush strokes would be left very visible in this ground. He would then start by laying in theshadows with glazes, scumbled over the ground but left translucent. The effect of all this was that lighthitting the finished painting would, in the shadow areas, still reflect off the gypsum primer, behindthe layers of grey toned ground and glazed shadows. The intention was to give the shadows depth and life.Areas of the subject in full light would then be painted with opaque paint.

Since I’d been less than convinced with the appearance of some of my shadows in the ten single objectsseries, and also since I’ve been conducting some experiments with different mediums, it seemed like thenatural thing to do to experiment with a version of this technique. What I’ve been doing is priming my MDFpanels with acrylic primer, then washing over it with a mixture of burnt umber or sienna and ultramarinealkyd, thinned with gum turpentine. Alkyd based paint dries fast, so I could prepare the panel the nightbefore I was due to do a painting.

With my prepared panel, I would then start by laying in the shadow areas with thin paint, usually awarm mixture of burnt sienna and ultramarine, mixed with whatever medium I was trying out that day.Once that was done I would start painting the areas of the objects in full light in the standard way,with opaque paint, sometimes mixed with a little more medium and sometimes neat. If, after this stage,the shadows needed any colour, say from reflected light, I dragged a little paint into the still tackyshadow areas, taking care not to let it become opaque and keeping white out of the shadows as much aspossible.

I have to say the effect was almost magical. Paintings built up like this have a depth and lifeto shadows, much more as they appear in reality, whilst keeping a certain vagueness about them. Theyalso have a lot of warmth. The areas in full light, painted with opaque paint, seem to come forwardout of the shadows, with the transitions between the light and shadow areas eased by the medium,requiring only the smallest amount of blending where they were overlaid.

I admit I was quite surprised by this painting, the feel is very different from previous ones. Theapples just seem to live more than any of the paintings in the ten single objects series. 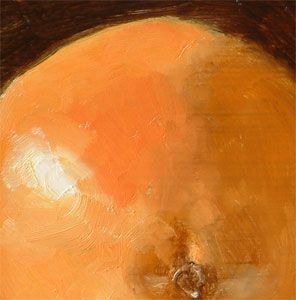 This detail from theGrapefruit and Lemon, thefifth painting in the series, shows the opaque paint on the left where the light is hitting thegrapefruit, with the shadow area on the right painted thin and translucent. You can see the horizontal streaksof the grey ground clearly showing through the shadow area. 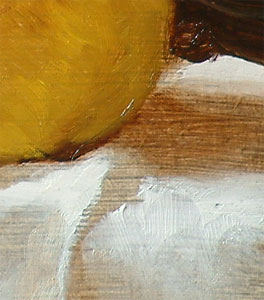 This is another detail from the same painting, the underside of the lemon with some of thewhite cloth. It’s even clearer here how the painting has been built up.

For the white cloth, all I did was to lay on some opaque white for the light areas, and letthe shadows stand as they were when I first painted them, with a lot of the ground showing. I’vestruggled a fair it with white cloth before, it was almost scary how easy it was to get an effect of thecloth with this technique.

I don’t know yet how long I’m going to paint like this, whether I’ll change the technique at some point.Certainly there’s any number of ways to build up a painting. This exploration is teaching me something about howthe old masters, particularly the Dutch seventeenth century painters, built up their work. Of course thisis a crude version of the technique, but the effect is similar.

After doing a few paintings like this I went down to the National Gallery and spent an afternoonlooking over the Rubens paintings there. I confess I was amazed how similar Rubens’s paintings andthese ones I’d just done were. I don’t mean I paint as well as well as Rubens now, nothing could befurther from the truth. I’m talking about how the paint is applied. Rubens’s paintings are great tostudy because he painted quickly. Each layer of his painting is clearly visible, and it’s possible todeconstruct areas of the paintings and get a good idea how he put them together.

There are areas of hisSamson and Delilahpainting where you can clearly see the untouched, streaky ground showing through, especially on thefolds of the white sleeve on Delilah’s right arm. The white highlights are laid over this streakedground in opaque paint, with the ground serving for shadow. Look closely and that area of the paintingbecomes a lesson in how he built up his paintings. Step back and the cloth fairly shimmers withvibrant light. Follow the link above to the National Gallery’s (excellent) web site. Click onthe painting and use the zoom function to zoom in on her right sleeve, it gives you a good idea.Not quite the same as seeing it in the flesh, but clear enough to get an idea how that area of thepainting is done. One thing I did notice about all the Rubens paitnings there though is that the groundwasn’t grey, it was a warm yellow ochre. I haven’t tried that yet, but plan to do some experiments withdifferent coloured grounds at some point.

The last painting in the series of the ten pairs of objects was theTeardrop Fiddle and Bow. Asa full stop to the series I indulged myself and spent a few days over this painting, it’s much biggerthan my usual little panels. Parts of it came out ok, but overall I’m not especially happy with it. Ithink I stretched a bit too far. I did learn a lot from it though, mainly about how much more effortit takes to produce a painting this size, with a subject this complicated. I did enjoy painting it though.

This beautiful little instrument was made by Blaine Horlocker ofSmokey Mountain Dulcimers. I would recommend himwithout hesitation. In this ugly world of blatant commercialism and everyday rip-offs, there are stillpeople producing beautiful objects for an honest price. In fact too honest in my view, he should becharging a lot more. I plan to paint this fiddle again at some point, and to do it justice next time.And yes, it sounds just as pretty as it looks.

I must admit, it’sbecoming a bit of a trial getting all these series finished, I have two new drawing series I’m ready to start,but I wantedto get further through the ones already under way before I did. Now the hands and eyes are finished andthere’s just the noses and mouths to go, I’m going to start the next ones soon. They’re going to stretchme a bit further.

I think it’s important to make sure I finish the noses and mouths too though. Apartfrom anything else, getting to the end of each series means the achievement of a small butpsychologically important goal. I feel I’m progressing when I can wrap up each one, whether that’sreally the case or not.

This post comes a little late, since I’ve already done the first three of this series,so far with mixed results, as usual. Thisorchidis number two.

Painting flowers is not the same as painting fruit and veg, it’sharder. If anyone tells you different, tell them you are not paid to listen such inanities and requirethat they be on their way in short order. I do hope that by the end of the series I get a bit betterat them. Mainly it’s the complexity I think. But that’s a good thing of course, because it means I’mbeing stretched. I do think that if you can paint, you can paint anything. It shouldn’t make anydifference whether you’re painting a person, a park or a peony, the principles should be the same.After all, that’s the point of all these still life paintings – to train my eye and to teach meapproaches and techniques which I can directly apply to portraits, when I get that far. We’ll seeif it bears fruit (ouch).

June has been a good, productive month. It’s had it’s up and downs, but that’s in the naturalway of things. I’m feeling very positive going into July. My painting is definitely getting better,but I’ve been neglecting my drawing, so I’ll focus more on that over the next month, at least that’sthe plan. But I also want to get the flower series finished by the end of the month, so we’ll see.

I’ve brought in July by doing my firstcafe sketches trip for just under amonth, and I reallyenjoyed it. I’d had enough of drawing those unruly sitters at the start of June, but today it feltgood to be back in the cafe again. The plan for July is to get back to doing that once a week again.