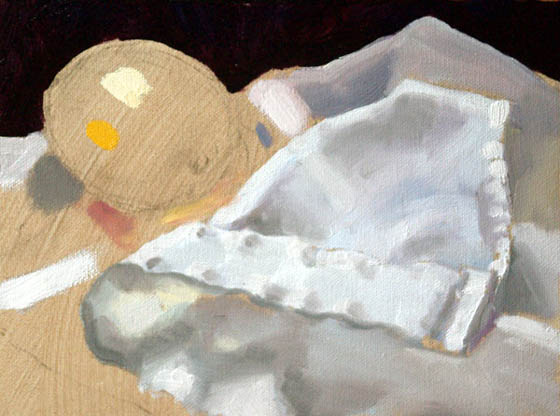 This site won’t be much of a record if I don’t put up failures as well as successes. I abandoned this painting after about an hour and a half.

After my success with the carrots and squash, I was looking forward to this painting. I’ve got a method together to apply to each painting, and following it should give good results every time. Life’s just not that simple though, and human beings aren’t machines or computer programs, we don’t do things the same every time.

I did this painting yesterday afternoon (Monday 14th). I’d worked through the night because I had to get something done for a client, which I’d intended to do over the weekend, but I got fired up with building this site so didn’t get round to it. It had to be done by first thing Monday morning though, so there was nothing for it but to work through.

Come 14:00 Monday when I started this, I was feeling pretty tired. I knew I only had 2 hours of daylight left at best, but my enthusiasm was up so I thought I’d give it a go.

You remember I screwed up the cloth on the Carrots and Squash, right? So this painting was going to be mainly about the cloth. I wanted one object to set it against, had bought a nice looking lemon from Waitrose that morning, and borrowed a deep violet shirt of Michelle’s for the backdrop (complimentary to the yellow of the lemon).

The sun was out, that beautiful autumn sun. This time of year, it never gets directly round to my window in this room, but there was a lot of light coming through the window and I wanted to make the best of it. I set up the lemon and the cloths just in front of the window and set up the easel facing it too, a nice viewpoint with the nearest plane of the lemon in shadow, and a bright highlight on the top plane. I arranged the cloth nicely with a fold with some reflected light coming through underneath in the foreground. I sat and looked at it for about ten minutes before starting.

What I hadn’t thought of though, is that the surface of the colour checker would be in shadow from this angle when I held it up, facing the window as I was. I could still isolate the colours ok, but putting dabs on the card to compare colours was out of the question since the dabs were in shadow.

I spent a long time with the colour checker on the highlight on the lemon. I’m still not sure I got it light enough, but that was flake white with a small amount of cadmium yellow pale. How could I go lighter? Actually I have a sneaking suspicion that since I didn’t clean the palette properly I was having trouble getting pure lights. I should make sure I do that little job in future as part of my cleaning up routine.

If the highlight on the lemon is the lightest light, then logic and reason tells me that the cloth has to go darker to make the highlight on the lemon stand out. But if the lightest light I can get with my paint is not as light as the one on the lemon, I have to keydown the tone of everything else in the painting to compensate. If I key down the tone values of the whole painting then I’m not painting what I see, which kind of defeats the object.

Is it the case that I just can’t get the tone of the highlight light enough with oil paint? That the medium is incapable of reproducing nature in this case? What if I wanted to paint a candle, or the sun? Would I have to paint everything ‘wrong’ to get the relationships right? Who would have thought a highlight on a lemon could present me with such problems.

This brings up an issue which I’ve been thinking about a lot lately. When you produce a painting, you’re trying (at least for representational painting) to portray as honestly as possible what you see before you. But it passes through two mediums before it gets to a viewer, the paint and you. I’m making a big deal on this site about painting what I see, but I know that alone doesn’t make a good painting. The quality of the edges, of the brushstrokes, whether the painter has managed to convey some personal feeling about the subject, all these things and more come into play.

Back to the painting, I think I know what the main problem was, why it fell apart so badly. I was working in details on the cloth way to early, before I’d even painted in the main planes of the lemon. I was still painting even though my concentration had gone. Maybe it was tiredness, maybe all the small strands which come together to make a good painting just didn’t cross yesterday. There’s always tomorrow.

What you can see pretty clearly with this painting is my method. Raw umber acrylic washed ground, roughed out main outlines in charcoal, then straight on with the colours, no underpainting.

It got to about half three, the light was going, and it was pretty obvious it wasn’t going to happen with this painting by then.

My conviction that I need to learn to see, and to paint what I see, is still there, but it’s taken a bit of a wobble with this painting. Now I’m wondering where I place the line that marks where I paint something deliberately wrong to make something else look right, and when its all right to cross that line and when it isn’t.

I’ll stick with the method on the next one, but I’ll make sure I get a good night’s sleep first.

Of course the next painting is going to be lemon on a white cloth.