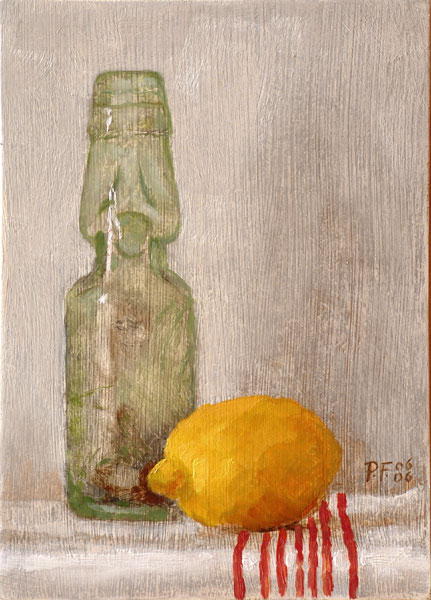 Number six in the ten pairs of objects series, this one has a slightlydifferent quality to the light than the previous paintings in this series.

I’ve noticed that where I set up in the room – how close to the windowthe set up is – makes a big difference to the quality of the light. This onewas set up against the back wall, at right angles to the window, wherethe light is much more gentle and diffuse.

I like to do this every now and again because less dramatic lighting isharder to catch because there’s less tonal variation. The last painting I did withthis light was the last of the ten single objects series, and was also of agreen bottle,all on it’s lonesome. This bottle was bought on the same trip to Whitby as the onein the other painting, but is a bit dirtier. It’s one of those bottles where theypinch the glass at the neck and drop in a marble before closing the top in, I thinkas a primitive kind of stopper.

Attentive visitors will also notice that I’ve included the cotton tea towel withthe red stripe this time, to serve as a complimentary to the green of the bottle andto balance the composition by putting the strongest colour over to the right. Thepainting looked unbalanced until I put in the red stripes at the end.

Much of the texture in this painting comes from the ground, which was partly anaccident. After reading about how Rubens used to leave brush strokes in his grey groundsso that they would show through the translucent glazed shadows and give them life, I’vebeen doing the same for the panels I’m using now as supports throughout this series.But it’s more noticeable in this painting. As I was setting up today, it struck me thatthe ground was a little too dark. I planned to paint the bottle with very thin paintto reflect the texture of the glass and to provide a contrast to the opaque paint on thelemon, but the tone of much of the bottle was a little lighter than my ground.

To lighten it, I sanded it back a little. It did lighten the tone overall, but itonly took off the grey stain where the brush strokes of the acrylic gesso ground stood proud,leaving it in between the brushstrokes, so although I ended up with a lighter ground, Ialso ended up with considerably more texture. I haven’t decided yet whether I like it ornot. Also, most of the paint is very thinly applied, meaning that much more of the groundshows through. The only parts of the painting which have opaque paint which completelycovers the ground are the parts of the lemon where full light brings out the yellow,the very front edge of the cloth, and the red stripes. 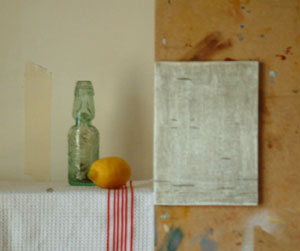 Here’s the painting right at the start.As with the grapefruit and lemon,I didn’t use the framer today. It seems surplus to requirements now. However,since I’m working sight-size, (painting the still life the same size as I see it,)and I’m quite careful about the measuring out, I placed a strip of tape againstthe back wall to show me where the left side of the painting would fall and tohelp me measure in from this edge.

The small horizontal marks on the panel which you can see in this shot arethe beginnings of the drawing out. I pick a point on the still life, the topof the bottle, say, and sight across to the panel using a brush held sideways.Fixing my eye on the point on the panel where I want this mark to go, I stepover to the easel and place the line. The highest line on the panel here correspondswith the top of the bottle. I’ve also placed marks for the back edge of thetea towel, and the top and bottom of the lemon. By the time I get to this point,I’ve broken the ‘blank canvas’ trepidation and I’m into the painting.

The next stage is marking in some vertical lines to define the sides of thebottle and the left and right edges of the lemon, then I start to lay in the shadowswith a warm glaze. 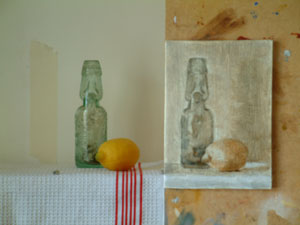 Here it is with the main shapes drawn out and the shadows laid in. Getting tothis stage of a painting usually takes about an hour, but with this one it tooka good two hours to get to this point, mainly because of the complexity of thebottle. I’m ready to start applying colour now. I’m using a mixture of burnt sienna andultramarine currently for this stage, mixed and thinned right down with medium topreserve the translucency. I haven’t put in the stripes on the cloth because that’stone supplied by local colour, it will be opaque, and I’m only putting in shadows atthis point. The composition looks a bit unbalanced at this point, but that willbe sorted out when the red stripes go in, the strongest colour accent in the painting.This time I’ve let the burnt sienna/ultramarine mix get warmer on the lemon andcooler on the bottle, so there’ll be less work to do when I come to add the colour.

Another change today was no colour checker. It’s not that I feel confident enoughin my eye’s ability to see colour correctly now, it’s just that I’d covered it witha fresh coat of flat grey yesterday and it was still wet. All the same, I seem to havegot by ok without it. I don’t intend to stop using yet though, if ever. I know thatmy brain can still confuse me about what my eyes are seeing.

I couldn’t see this painting when I’d finished it, I couldn’t decide whether I likedit or not. It took a bit of time away from it, a couple of hours or se, before I could seeit with fresh eyes. I decided I liked it. What made me look at it again was Michellecoming home from work and making some appreciative comments. Looking at it again at that point,I decided it was ok. But maybe that’s just because some one said something nice about it.

I have decided that the next batch of panels I prepare will have a more even tone though,I think the texture of the ground in this one might be a bit too strong. After all, what I waspainting didn’t have a texture like that, and I’ve a feeling that the bottle would havelived more if I’d laid in the glazes on a smoother ground. I think I’ll paint this bottleagain on a smoother ground, maybe in the next series, and see what happens.

Just a quick word on the medium. For the last four paintings I’ve used Roberson’smaroger medium, which I like very much. But I’m supposed to be doing some experiments withmedium at the moment, so even though I didn’t want to, I used the Roberson’s Oil PaintingMedium again. The last painting I used this medium in was theGarlic and AubergineThis medium is described in Cornelissens’s catalogue as “double thick mastic varnish.”Mastic apparently is a natural resin which comes from Mediterranean trees, but I thinkthe Roberson’s version is a synthetic substitute, since Cornelissen list it as alinseed oil/synthetic copal varnish mix. It’s much slicker than the maroger, (which islike tube cheese,) and seemed especiallyliquid today. I’m wondering if the hot weather is changing it’s consistency. One thing Iam sure about is that this medium dries faster than the maroger does. A bit too fast forme, being a slow coach. There were times when I worked back into glazes I had put downan hour or more previously, and they had already begun to set, which made them moredifficult to work with. I notice it drying faster on the palette too.

Despite the difference in consistency between thismedium and the maroger, in actual use they weren’t much different. I’ll need to do somemore experimenting to be sure, but the slower drying time of the maroger seems to workbetter for me with the way I’m building up the paintings at the moment. The only otherreal difference is that maroger dries to a satin finish, similar to the oil paint itself.This medium has a more gloss finish which it retains when it dries. I’m not a great fan ofgloss finishes, the satin finish of the maroger seems more natural to me. I’ll try thismedium again to be sure, and if I still feel the same about it I’ll relegate it to theback of the paint cupboard.