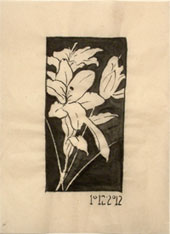 When we learn something new, our brains change. They physically change.

As we evolve new skills and reinforce existing ones, we grow in competence. Our love of our work deepens as we improve. It’s a bit like compound interest.

In the first post of this series, I introduced an initial drawing of lilies, and proceeded to create a design based on it by croping the drawing.

In this second post, I’m going to take that initial design further by tracing it in ink and then using tracing paper to try out a different design based on the original drawing.

For me, this is where art begins to happen.

By taking my initial visual impression and developing it, building designs based on it, I’m stretching my sense of composition.

The changes are permanent. It will never again retain its original shape.

Here’s a video demonstration of the next stage of this design project.

I’m using tracing paper over the original design to make subtle changes to the composition. Tracing paper is invaluable for this kind of variation, making it easier to visualise what a change might look like:

In the next post in this series, I’ll be making a black and white (notan) study of one of these designs. In following posts, I’ll be reducing the elements down to their essentials and creating some much more simplified designs based on them. Tracing paper will be much in evidence again.