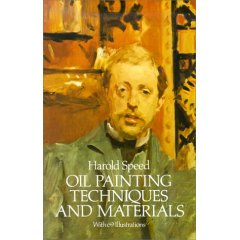 I’m giving the first part of this post over to Mr. Harold Speed. In case you didn’t know,the good Mr. Speed was a gentleman painter hailing from good old Blighty, who wrote a ratherimpressive book called “Oil Painting Techniques and Materials”, back in the nineteen-twentieswhen painters knew the difference between gesso and oil primer, and brushes were “lovingly sucked”after washing to help them keep their shape. No really, they were, Harold says so.

I like Mr. Speed. He has a lot of very helpful advice for aspiring oil painters which he imparts withclarity, elegant charm and great enthusiasm. One of the especially useful pieces of advice he’s given me is towork with a limited palette. He’s talking about portrait painting here, but the advice applies equallywell to any subject, especially still life, as I’ve found myself. Here’s what Harold has to say.

Painting from the life in two colours.- I have selected a head as a demonstration,because this is an exercise in which one can learn all one wants about the system of paint hereadvocated as a means of learning the craft. The difference between painting a head and painting afigure or anything else, is not in the method of painting, but in the drawing (form expression).

Before commencing to paint in full colour from the life, I advise students to commencewith two colours only – a warm and a cool colour. A great deal that is of great importance with regardto colour, can be more directly learned by this means than by stumbling in with a full palette. Andthis position of the warm and cool colours in flesh painting, is one of the most important considerationsin colouring; as it is on the opposition of the warm and cool colours, that the vitality of colouringlargely depends. Painting with red for your warm and black for your cold, and a mixture of both foryour neutral tones, a surprising amount of colour vitality can be obtained, by the right placingof the warm and cold colours. And as very little effect can be obtained if this opposition is notattended to, once is forced by using this very limited means to concentrate the attentionon this new consideration. Having, it is to be assumed, already mastered tone, you have now theopportunity of overcoming singly this new and most important difficulty in the province of colour.

In training oneself, the thing to aim at is taking the difficulties one at a time,and concentrating the whole attention upon them. Muddling along with a full palette, and the whole difficultiesof painting at once, which is the common method (or lack of method), is asking for trouble.

It wasn’t until I gave up painting altogether for a couple of months to concentrate on a series oftonal still life drawings in charcoal,that I began to get a handle on tone. As the drawings progressed, I got a hankering to try applying what I’dlearned in oils.

So began a short run of tonal exercises in raw umber and flake white. Somewhere in the middleof these drawings and raw umber studies I fell in love with tone. For me, paintings which emphasisetonal qualities over bright colour have a quiet dignity in the expression of light and shade that brightcolour can eclipse with it’s brash shouting for attention. Something about it suits me. Tone is going to be amajor feature of everything I do for the foreseeable future, I’m convinced of that. I think I can express feelingwith tone, feeling for light, that I can’t match with colour. No two ways about it, I’m in love with tone.

Encouraged by the raw umber studies, I moved on to some more studies with burnt sienna, ultramarine andflake white. The burnt sienna and ultramarine gave me fairly (but not completely) neutral greys, which Icould push more towards warm or cool as the situation demanded.

These were my counterparts to Harold’s redand black for flesh tones. But the emphasis was still very much on tone. At this point, the subjects for thepaintings were all coming from the still life drawings. I’m a great believer in working in series. Youcan try out new challenges, or the same challenges from a different angle, day after day until you make someprogress. And at the same time, you may develop the beginnings of a personal style without being aware thatit’s happening. Keep your head down, churn them out, and when you come up for air you might be surprised atwhat you’ve achieved.

The next change came with the addition of raw sienna, and the dropping of burnt sienna. Raw sienna gaveme a lot of trouble at first, my soft purplish greys were replaced with greenish greys which I didn’t get onwith nearly so well. But I persevered, and after six little studies based primarily on raw sienna andultramarine, I’m beginning to get a handle on it. A couple of these studies have also included yellow ochre,and the last one incorporated a new colour to me, transparent oxide red, like burnt sienna but richer andhigher in both chroma and tinting power.

So the palette is slowly beginning to expand, but only further into the earth colours for now. Theearth palette I’m slowly evolving is enabling me to sneak back up on colour without losing my emphasis ontone. I have a feeling that something is happening here, that I’m beginning to find my way, and to see afaint glimmer of what my painting might become if I stay on this path. Without any conscious effort on mypart, I think I’m beginning to find a style which suits me, one which I can work comfortably in for sometime to come.

I’ve never felt more sure that I’m doing the right thing by returning to painting. Alright,so I’m having to sacrifice quite a lot in the process, not least financial security, but I honestly thinkit’s worth it. And I also believe that if you’re going to do this stuff seriously, and especially ifyou’re going to paint for a living, you have to give it everything. No half measures, no safety net.As my painter friend Jim said, “no foot dragging.” I’m with you, Jim.

Oh, and it looks like I just sold my first painting. Things are looking up.

These last four paintings are me coming to grips with raw sienna. Replacing the greys resulting fromthe burnt sienna and ultramarine with raw sienna has given the paintings greater warmth and depth, I think,but it’s also meant a slightly narrower tonal range. I think the next stage may be, as the paletteslowly expands, to introduce black to give me a deep dark at the extreme of my tonal range and also give meneutral greys. But even witha narrower range, these paintings are still very much about tone, and, as I learned with the red and bluestill life studies, a narrower tonal range does not necessarily mean a restricted expression of light.

This is the first all raw sienna and ultramarine painting that I really felt worked. There were twomore before this that came out as a green grey sludge. They ended up in the bin, well one of them did,the other is still lurking around here somewhere. I know I’ve always posted my failures before, but pleaseallow me this one indulgence. I don’t want to post those sluggish green mud paintings.

This one is primarily raw sienna. I wanted to see what would happen if I allowed it to dominate the picture,and also I wanted to challenge myself a little. There’s none of my usual sharply contrasted lights and darks here.The challenge was to see if I could still make form work with a flat, diffuse light. You decide.

I think this is my favourite of the paintings I’ve done recently. The viewpoint is unusual for me,I usually go for a higher viewpoint looking down, but this composition, with the ladle carrying the eyefrom the left to the right, seemed to work better from this level. I added yellow ochre to the palette forthis one, mainly because I wanted a slightly higher chroma green on the bottle.

But neither the composition nor the colour are what this little study is about for me. There’s a specialquality to winter light, especially in the afternoon when it’s fading, that I’ve always loved. It has a kind ofquiet nostalgia about it, which gives me a feeling of calm and contemplation. I wanted to try and catchsome of that feeling in this one, and I think I did. This is the painting that’s sold. I can’t help thinkingthat this one having, for me, some feeling, expression, whatever you want to call it, and someone liking itenough to buy it is not a coincidence. The buyer is another painter friend, one who’s work has greatsensitivity in my opinion. I’m especially pleased that someone like that considers this paintingworth buying.

Back to basics with another raw sienna and ultramarine study. This one does have a little touch ofyellow ochre too, on the egg cup, it just seemed to want a little more chroma there. But we’re still talkingbasically about yellow earth and blue.

Although the paint handling is a little rough on this one, I like the feeling of the light, that same winterlight. It has to be admitted though, I could have done a much better job of the pattern on the bowl. I’ve neverbeen particularly interested in detail, since the main forms are more important. But since I’m about to embarkon a series of more finished paintings over the next three months, I’d like to start giving some more attentionto things like that.

This last one, finished on Christmas eve, is the furthest I’ve moved away from the two-colour palettes.The capsicums are the highest chroma objects I’ve painted for some time. In reality, the orange of those littledried peppers was more intense that I could get with my earth palette, but I’m quite happy with that. Afew months ago, when I was turning out my high chroma fruit paintings, it would have bothered the hell outof me. But no more. Along with the acceptance of my limited tonal range, compared with the range I see innature, is coming an increasing acceptance of the same situation with colour. I could get closer than Iam getting now, that’s for sure, but I’m no longer interested in matching the colours I see in nature asclosely as I can. I’m more interested in the picture I’m creating, whether it lives, whether it has somefeeling. I no longer feel that the strongest expression of the reality of light falling on objects comesfrom a close matching of nature’s colours. I’m not even sure that the colour is that important to me any more.Most of my attention is focused on tone now, and I think I’ve found my natural stomping ground, and there’s alot of work to do there yet. Of course,this may all change at some point, but now I feel I can see a clear way forward for my painting.

It’s still all aboutthe light, but I’m getting there by different means, and I’m getting much closer to what I want from theselittle paintings than I was before. And I intend, by hook or by crook, to be painting for a living nextyear.