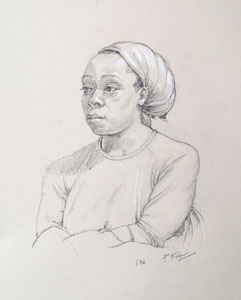 Art is a funny thing. You can work for a while, making what seems to be very slow progress, if any at all, and thenevery now and againall the strands seem to come together at once and you make a small leap forward. The last time that happened tome was when I did thecarrots and squash painting, I have a feelingits happened again here.

I seem to have improved in a few different ways with this one:

I’m not making any great claims for this drawing, its not all that strong in terms of line quality and depth oftone, it doesn’t have much style and there’s things I’d change if I was back in that moment with hindsight, butit is a definite improvement.

I have absolutely no doubt that the cafe sketches have had a big influence on how I’m working now. I’m seeingbetter, I’m simplifying better and these things have contributed to better drawing and a better likeness.

Past experience tells me that when I make a small jump like this, the initial exhilaration gets dissipated overthe following days when I realise that the next batch don’t show a similar jump. Its just the way it works, asmall jump up to a new level is usually followed by a long period spent on a plateau before it happens again. Fornow I’m just happy that I’m getting better and the study is paying off.

I’ve a nasty feeling I’ve said this before somewhere, but I look on this drawing as my first portrait. Itsthe first drawing I’ve signed, so I guess that says something.