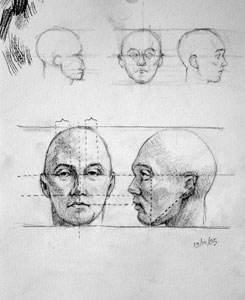 Artists have been doing this drawing for hundreds of years I guess. Most of the proportions ofthe human head were worked out during theRenaissance, and by and large they appear to be right.

Of course you’ve got to bear in mind that we’re dealing with what you might call ‘western art’ so we’realso dealing with ‘western’ proportions. That said, the majority of the major proportions I thinkwill hold true across cultures and geographical differences – the eye-line bisecting the skull,five eyes to the width of the head, etc.

Certainly I think learning these proportions can do no harm as long as you don’t enforce them on yoursitters, and can judge the differences between these proportions and those of the sitter right.I could even see it being effective to deliberately accentuate something in a portrait to intensify the likeness.I’m reminded of cartoonists you see in tourist spots,if you look at a few of their drawings you’ll see that certain features will always be the same -the nose, shape of the chin maybe, of the eyes – but the cartoonist will pick out one or twoidentifying features, like hair or a hat. I’m not criticising them, they have to work fast. I’ve done mytime working tourist money too.

The proportion of the eye-line is particularly interesting. Looking at theself portrait I did yesterday,I could swear that the eye line is more than half way up the skull. This is the way we see faces too, and isa common mistake made in beginners’ drawings (and many of my recent ones I might add).

But I measured that eye-line only yesterday, and I know it falls exactly between the chin and the top of thehead. Having a number two and thinning hair means I can see the top of my head, take it from me, that’s half way.

Probably there’ll be some value in doing a good few repeats of the above exercise, from different angles.If I can drill that eye-line, head width etc into my brain, maybe I’ll be less likely to fight with myself when I’mtrying to get a proportion right.