Business and my impending wedding have been keeping me from doing much updating, and also fromas much painting and drawing as I’d like be doing lately. There’s been a few things gone upon the site recently though, three more flower paintings, three more noses, and my first selfportrait since I came off my line only diet.

As should be fairly obvious from the picture, this one isn’t finished. I struggled with the background, andafter beating my head against this one for three days I decided that discretion was the better partof valour and moved on to the next painting. I’d like to do some of these of these flowers again at some point,just to put this one to bed, but I’m not sure I will because I find krisanthymums hard to spell.

A bit of an improvement on the last one, but then that’s hardly a tall order. Although I’m fairlyhappy with this one, it struck me that the dark background has given the painting a decorative,strongly two dimensional look, which I don’t really want.

As far as matching colours goes, my primary aimwith these paintings, this one was fairlyclose I think. The flower itself has little form, which also contributes to the two dimensional look. I decidedafter this one to put in more of the surroundings, to avoid it happening again.

Purple Gladioli. This painting was slightlylarger, to compensate for the size of the flowers, they were about threefeet tall. This meant not working sight-size. I put in the shadow on the back wall and a bit of the vaseto avoid the problems of the previous painting. On the thumbnail, this one works fairly well I think, butnot so well actual size. I don’t mind that at all, since I’m after matching colours and gettinga feeling of the light primarily. The thumbnail pictures are like looking at a painting from a distance, which is ahandy way to judge whether or not I caught the light. At that distance, details aren’t discernable so only theoverall impression counts. From that perspective, this one worked out ok.

This is number nine of the ten flower paintings series, one more to go. Although I’m very busy at the moment,I’m determined to have this series finished before the month is out.

Finally, the twenty noses series is finished, one more put to bed. For the last three drawingsof this series I used my cast of Clytie for my model. It was also over these three drawings that I startedto use tone again in my drawings. After concentrating only online since April, I decided it was time toallow some tone to creep back in.

There’s no doubt in my mind that concentrating on line for a while has improved my drawings. the line hasgot better, yes, but I think that reducing the amount of things I had to deal with at once also helped myeye training. Drawing is a complicated business, and simplifying it has helped me to improve I think. Now thatI’m putting tone back in, I can really see the improvement in both my accuracy and the sensitivity of thedrawings. 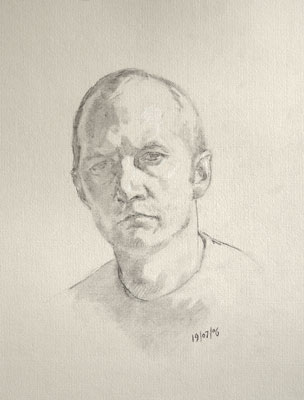 And here, for me at least, is the proof.

When I compare this drawing to the one’s I did in mySelf Portrait a Dayseries last year, I can see how much I’ve come on. Not only is the drawing stronger with more life, thelikeness is considerably better than any of the other drawings. I think this looks like me. I did a numberof self portraitsjust with line before doing this tonal study, and the eye training appears to have paid off.

I admit I wasa bit surprised with this drawing. I was hoping that when I put the tone back in the drawings would livemuch more before I started my line only diet, but I’m getting used to being disappointed by my work.I’m not disappointed with this one.

I know it’s not a great drawing, and that there’s a very long way to go before I’m happy, if I ever am,but seeing improvements like this is what keeps me going. It is possible to teach yourself. It takesapplication and commitment, more I think than if you’re following a course with teachers helping you along, butone of the things I hope to prove with this site is that it can be done. It just takes practice, and lots of it.