Things have moved on a little with the iron painting so it’s time for an update. Today I’ve got a colour study to post, and a few photos of the set up for the final piece, which has just been started.

Already I’ve run into problems and willhave to start it again – par for the course in painting land it seems, at least for me. But more on that in a bit. First, here’s the colour study: 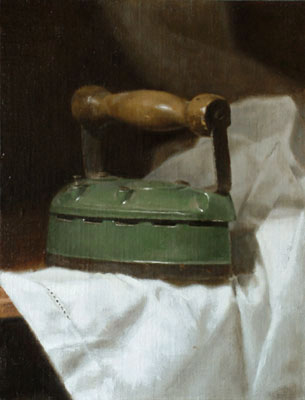 Look, I found my paints! Gasp! Colour! After a year of exclusive value practice in neutral greys, I’ve finally remembered where I left all the rest of my paints!

Budding fauves might be less than impressed with the strength of the colour of course, but I’m not a fauve and I don’t like Bonnard. Apologies to fans of Bonnard. This probably isn’t the blog for you.

What I’m looking for at the moment is natural colour, a convincing translation of this iron and the cloth onto my panel. That’s not to say I’m against the expressive use of colour. I like a lot of work that uses colour much more freely. I like Monet’s work a lot, for instance, at least the stuff he did when he could still see and had some respect for value. I was recently utterly floored by some large Veronese paintings at the National in London, and whilst you could hardly call Veronese’s painting garish, he certainly appeared to use colour in a very decorative way (in the highest possible sense of the word.)

My current thinking on this is that I’d like to master realistic colour first, to understand how light affects the colour of objects in the real world before moving on, perhaps, to allowing the colour more freedom. If I ever feel the need.

If you’ve seen my previous posts on Munsell tone studies, you’ll have read a bit about how I’ve been using the Munsell neutral scale as a tool to investigate values. Now I’ve got the big Munsell book and I’m using it in a similar way to investigate how colour is affected by light and shadow.

I hope to post in more depth on this at some point. The Munsell colour model is becoming a popular tool lately for understanding colour in some circles, most notably at the Rational Painting forum. To find out more about it, sign up at the forum and look around. I’ve put up a post there which describes some of what I’m doing, which you can see here, but you need to be registered on the forum and logged in to see it. Anyone who’s experienced ugly fights on forums will perhaps understand why Rational Painting is a private one. There’s a strong neo-classical agenda at the forum that won’t suit everyone, but the membership is fairly diverse and other points of view are sometimes aired.

Back to the colour study. I don’t want to go on too much about this, because I have a lot to get through tonight if I’m going to get this post finished.

This piece is at various stages of finish. Most finished is the handle, I think that’s done, next most finished is the body of the iron, and the cloth is just roughed in. This being a study, I didn’t feel the need to finish everything. I got what I wanted from it and I suppose I want to save something for the final one.

There were a few things I wanted to sort out with this study. Firstly, I just wanted to know if I could get it as convincing in paint as in chalk. Mission accomplished, I think. Secondly, I wanted to get to know the iron better. My new hobby horse is observation. I’ve been banging on about value forever it seems, now I’m going to start banging on about observation too.

When I returned to painting, the first thing I had to do was decide where to start. I glibly thought that I’d do a few studies aiming to draw or paint exactly what I saw to make sure I could do it, and then move on from there. Three years on and counting, those few studies have turned into hundreds of studies. It was a lot more complicated than I thought.

Quite apart from it being impossible (and probably undesirable) to copy exactly what we see, the big problem with that plan is that I believe that seeing itself is a cumulative skill which must be learned and practiced.

I’ve spent about two months with this iron now, and still every day I notice something new about it. Perhaps part of the act of painting is selecting from all that information what goes into the painting and what doesn’t. If so, I’ll be in a better position to make those choices if I’ve seen it more fully.

Maybe it’s partly because we’re so deluged with images these days. Maybe it’s always been this way.

But there’s no doubt in my mind that the most necessary and perhaps hardest part of learning to paint well is in the observation. That’s largely why I’m working so slowly now. Working sight size is a great teacher of observation skills, since immediate comparisons can be made between the subject and the work. It’s also very humbling to realise, particularly when you’re striving for accuracy, that 90% of the marks you make are wrong. I know from experience that it gets easier with practice, and I think a lot of that is due to stretching of the skill of observation.

This colour study also gave me a chance to see if the values from the chalk study were going to translate directly into a colour version. They have, pretty much, which would bear out the idea that value is the most important aspect of colour. Doing the iron for a second time, I’ve also noticed things about the balance of values which could be done better, so that will be going into the final painting.

The last thing I wanted from this study was a bit of practice with a method of painting I haven’t tried before. These days, I tend to eschew mediums as much as possible. Not because I think there’s anything wrong with them, but because I think they should be used when the properties they impart to the paint are required, and only then.

Too often, I think we do things for all manner of reasons except the right ones. For all my criticisms of ‘magic bullet’ syndrome, I still sometimes fall for it myself. So for some time now I’ve been swearing off mediums, with the idea that I’d only use one if I couldn’t get what I wanted with paint alone, and if the medium in question would give me whatever that thing might be.

In this case, one of those things was to be able to paint over multiple sessions smoothly.

I’ve done so much alla prima that I’m most comfortable working wet into wet. I’ve never been able to blend in a new layer over dry layer and have it look alright just with paint. For this one, I wanted to work in stages, gradually refining it as I would a chalk drawing.

The first layer was just underpainting, blocking in the colours. I could get all academic on you and call it an ebauche, but ‘underpainting’ seems descriptive enough to me.

Actually, ‘undercoat’ would probably be even better, because that’s what it was, just like a decorator would use. The study is on a lead primed linen panel, which has then been painted a Munsell neutral value 8. Light grey, in more simple terms. But not the blue-grey you get from titanium white and ivory black, a true Munsell neutral.

Because the panel is light, the dark areas won’t cover in a single layer without thick paint, which I don’t want for this. The darkest areas, the shadows, I especially want to be thin and semi-translucent. So for the first stage, after the drawing out was done, I just filled in the blocks of colour with minimum modelling, in paint thinned with a small amount of turps. Nothing remarkable about that.

It was the subsequent layers where I tried something new for me.

I mixed up a medium of stand oil and turps, and before working on a section, I rubbed a little onto the surface of the painting with my finger, taking care to get as thin a film as I possibly could. The general idea was that it would be like painting wet into wet, and I’d be able to blend out the edges smoothly, even over a dry layer.

It worked like a charm. Nothing special about it, no magic bullet that’s for sure. But it did help the painting to go more smoothly, and I think this is the first time I’ve managed to do a painting over several sessions without screwing up the finish. For the final one I plan to gradually increase the proportion of stand oil and lessen the turps, so the medium gets fatter as I work up the painting and the ‘fat over lean’ rule is observed. We’ll see how it goes.

I was going to post the photos of the set up for the final painting. I’m not going to get to it today. As usual I’ve drivelled on about all sorts of things I had no intention of writing about and it’s already past my bed-time, so I’ll do it later in the week. Coming soon: the lazy man’s approach to sight size.

All will be revealed…