A few studies to put up today – the product of the last four days.Six cafe sketches,three eyes,my Van Dyck copyis finished and the first painting for three months – a littleonion.

This felt a bit naughty, doing a painting again. Because I’ve been concentrating on drawing in order toimprove both my drawing skills and my ability to see, I’ve done no painting since early December 2005. I’mroughly (very roughly) following an atelier style training progression now, which entails a lot of drawingpractice to get comfortable with line and tone before doing any painting. Still, I really enjoyed thispainting and I’m happy with the result. Naughty but nice.

Both Saturday and Sunday morning down at the Cafe Nero, neither was especially productive in terms of quality orquantity, but that’s in the natural way of things. I did two trips this weekend because thefirst one didn’t go very well. Ionly produced two drawings, I think because I was getting too preoccupied with the quality of the drawings. Sothen I went down again on the Sundayand produced some really bad ones to make up for it.

Just over half way through thetwenty eyes series now, this one is numbereleven. Two of the three new ones were drawn from a reconstituted marble cast I got off ebay for fifty quid.That might seem a bit steep, but I intend to draw this cast (and the other one I got) many times in my quest toimprove my drawing of form and tone. Drawing from casts has been an important part of atelier training for centuries,and has only fallen out of favour in the Twentieth Century. Now that some classic ateliers are springing up again,this kind of drawing is regaining some popularity. 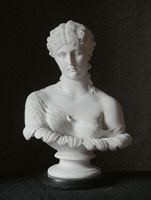 Here she is in all her glory. Beautiful, isn’t she? Unfortunately I have no idea which goddess she is, or whethershe’s Greek or Roman, but she does have lovely eyes – apart from that blank stare of course.

I have another one of a truncated torso of Adonis, on which the detail of the musculature is very fine. I’mlooking forward to doing some drawings of the full casts, but I’m not sure I’m ready yet and I don’t want to fallflat on my face with my first one. I’m hoping to start one after I’ve done a few more copies of old master drawings.We’ll see.

Speaking of old master copies, I’ve finally completed mycopy of a portrait drawing by Van Dyck, after aboutfifteen hours work. Yes, it was hard, yes, it was frustrating at times, but it was very good practice. This is themost rigorous exercise I’ve done yet. I think producing a series of these will sharpen both my ability to seeproperly and my concentration no end.

March has started well, I’ve been keeping myself busy and producing something every day, even if it’s just a smallsketch. Not everything has been good, but it’s all been (mostly) enjoyable and my confidenceis coming back bit by bit.