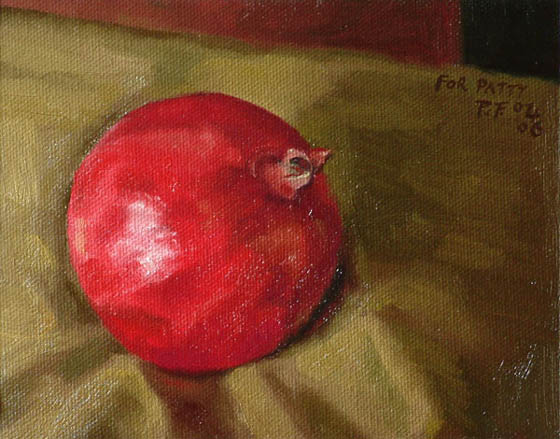 What is it about pomegranates? This is my sixteenth painting and so far a quarter of them have been of pomegranates. Maybe it’s the colour I like.

On this day the gods of light were not kind, I must have done something to anger them. They were sitting up there in the clouds all day, turning the brightness up and down and having lots of fun listening to me curse every time they changed it.

All the same, I’m quite happy with this painting, particularly with the set up. On the way back from my last cafe sketching trip on Saturday I stopped in the Oxfam shop to see if they had any nice fabrics I could use. They did. This green cloth is made of something called ‘short silk’, which I guess is a kind of cheaper silk, it has something of the sheen of silk, but a bit rougher. I liked the colour and the way it reflected the light. It’s one of a pair of curtains, so I’ve got plenty of it. It goes nicely with the red of the pomegranate I think, I like to use complimentaries knocked back a little bit.

I’ve got a confession to make. I’ve been using a very limited five colour palette of flake or titanium white, alizarin, cadmium yellow pale, ultramarine and Windsor green for a while now, to stretch my skill at colour mixing and so I can get used to those few colours and what they can do. Pretty much everything I find. Except on this painting I cracked, I used cadmium red as well. No matter how I tried, I just couldn’t get the intensity of the red with just alizarin and cadmium yellow pale. I did try very hard to get it first though, so I shouldn’t beat myself up about it too much I suppose.

This is the fifth of the ten single objects series, half way through now. I used the same set up as the last four, except that I had this one a bit lower off the ground so that I was looking down onto it more and angled my easel forwards a bit to compensate.

I worked as I usually do now, painting over about six hours, spending most of the time mixing colours and peeking through the colour checker to get them as close as I could. With the aforementioned changes in light, this painting was a bit of a struggle, but it doesn’t seem to have affected it too badly.

I’ve started being much more careful about the drawing now, making more of an effort to get the form of what I’m painting as close as I can. I don’t want a painting of any old pomegranate, I want a painting of this pomegranate. One of the reasons for this is probably the practice I’ve been doing with the Bargue drawings, but also I’m realising that getting the form right, even with something small like a single piece of fruit, makes a big difference to the reality of the painting. This was made very obvious to me when I painted the tomato. After I’d finished it, I noticed that the contour of the tomato had a lump on the top that wasn’t there on the actual tomato I was painting. I took my background brush and went round the top of the tomato one last time to improve the curve, and suddenly the tomato jumped right out of the painting at me. Not literally of course, I may be odd but I’m not completely crazy yet. It just had a stronger feeling of reality, it lived much more. I admit I was surprised.

I’m about to go off on one now.

My conclusion is that it’s because I’m painting nature, growing things, and natural things grow in natural ways. Tomato DNA doesn’t produce tomatoes which are pretty smooth all the way round except for a little lump on the top, it doesn’t happen. So when my tomato had a lump on the top, it looked wrong, unnatural. When I took the lump out, the tomato looked more real. By getting closer to the actual form of the tomato, I penetrated that bit deeper into its essence, and by extension to the essence of all tomatoes, and all living things.

This is why taking a photo of a tomato is not the same thing as painting it. The camera would leave something out, it would change tones, change the form. It can get somewhere near to the outside appearance of a tomato, but only somewhere near. And it can never catch the essence of a tomato, it’s inherent tomato-ness. It can’t capture the life of the tomato, or of any living tomato. A camera sees with a mechanical eye, an impoverished version of our own eye. For that reason a photo of a tomato is an incomplete rendering, almost a lie. A camera can look but it can’t see. Even my ham-fisted attempts at painting come closer to reality, to what I see, than a camera can.

I’m not saying cameras have no use, I like good photography as much as the next person. I’m a big fan of Joe Cornish, a landscape photographer who works in the area where I grew up, the North Yorkshire Moors. I love his pictures, but it also strikes me that he manipulates the images to a great extent to get something stronger than what the camera sees by itself, a more intense version of it. If he didn’t do that, his pictures would not be as beautiful as they are, and would not convey as much about his subjects. They would be impoverished snaps.

Conversely, by trying to get as close as I can to the subjects I’m painting, by trying to match the reality I see within the time I have to complete a painting, I’m trying to get close to the essence of the tomato, or the pomegranate, whatever it is I’m painting. My thinking on this has been clarified by reading “Zen Seeing, Zen Drawing” by Frederick Franck recently. It’s something I’ve felt for a while, and his book has helped me to put it into words.

Back to the painting. This is Patty’s pomegranate because Patty is responsible for putting me onto the Franck book. She did me a great favour by doing that. I’ve seen my thoughts about what I’m doing here reflected in the pages of his book, and that gives me a deeper conviction about what I’m aiming for more and more with these little paintings.

I must also mention William Whitaker here, a contemporary American painter. Bill’s paintings show a consummate technique and control of form, colour and light. But that’s not why his work moves me. It’s because he penetrates somehow to the essence of what he’s painting, he catches something in his figure paintings that a camera never could. There’s something deeply human in Bill’s paintings, he touches life, something very deep that I respond to even when looking at digital images of his work. Quite how that manages to come across in a photograph of a painting I’m not entirely sure. Honestly, I can’t explain that.

I hope that one day I get to see one of his paintings in the flesh, if I ever do I fully expect to be floored like I was when I saw the Tiepolo’s in Venice, some of the paintings at the “Americans in Paris” show at the National, and like I was by Van Gogh’s paintings in the Van Gogh Museum in Amsterdam. Nothing could have prepared me for that.

Obviously I’m aware that Van Gogh wasn’t a realist painter, he was a product of his time and his time was kicking against the classical tradition. But I think that he touched life, the essence of things, despite his style and his approach, not because of it. I’ve seen many paintings that try to emulate his style, but none that come close. It’s not a question of style, it’s a question of honesty of feeling and truth.

I hope one day I’ll be able to catch something of that essence of life in my paintings, whatever it is, whether I’m painting people, fruit, stones or trees. If that ever happens, perhaps I’ll stop writing so much and just paint.

So here you are Patty, here’s your pomegranate, I hope you like it.

Jan Dean has just emailed me to tell me (among other things) that the material is shot silk, called that because it’s one colour shot through another. Have a look at Jan’s poetry site. I particularly recommend the Egg poems. My favourite is the stone egg monkey one, I like the ‘fast as a bullet’ and ‘tall as the sky’ bit.