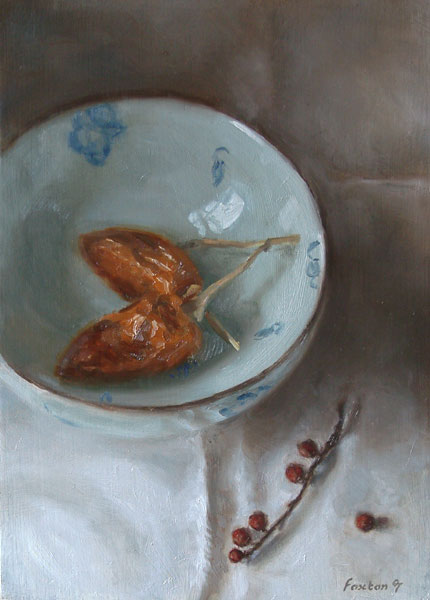 It’s interesting how much a different support can effect not only the painting itself, but how it’s painted.

This latest painting is on an MDF panel, as usual, but this panel is a bit special compared to my usual support. It’s all in the priming.

All the paintings I’ve done so far (apart from the first few) have been done on MDF panels sealed and primed with plain old acrylic “gesso” primer. I’ve always been quite happy with the acrylic primer – but then I hadn’t tried anything else.

This panel is sealed and primed with four coats of real gesso – the traditional stuff, made with rabbit skin glue, whiting and a little white pigment.

I’d better come clean, though. I didn’t make the gesso myself. After all, this is the twenty-first century, and convenience is so much more convenient. I used the traditional gesso from Studio Products. It comes in powder form, and just needs mixing with warm water and leaving to gel for a couple of hours. After warming, it returns to it’s liquid state and can be brushed on, sanding between each coat when it’s dry.

Now it would have been fine for me to paint on it as it was, but I can’t resist a bit of fiddling, so I decided to make myself a Rubens panel with this one. That entails a final coat of rabbit skin glue with a little powdered charcoal mixed in with it. This produces the streaky, silvery-grey ground that Rubens used on his panels and canvasses.

The point of the streaky ground is to add life to the translucent shadows, with some of the streakiness showing through, and some light reflecting right back from the gesso ground to give the shadows the impression of depth.

The thing is, in order for that to work, the shadows have to be translucent. I forgot that bit, and painted them opaque anyway. Ah well, there’s always the next panel.

How traditional gesso is different to paint on

The most obvious difference between this panel and my usual supports was the smoothness.

Traditional gesso, after sanding, is as smooth as an eggshell. This panel had a final coat of rabbit skin glue as well, and there was no hint of the usual drag on the brush which the acrylic version gives. I think that would have been the case even without the final coat of glue.

On a traditional gesso ground like this one, the brushes fairly glide across the surface. That can be a little disconcerting at first, because every mark, every nuance of every brushstroke, is shown up by the smooth ground. But once you get used to it, the realisation comes that you have much, much finer control over the paint than is usual.

I generally paint wet into wet. With an acrylic ground, it seemed that I had to build up the paint to a certain thickness before the brush would start to glide and the handling and blending possibilities reached their optimum.

With this ground, there’s no need to use thick paint to get that. This painting, like the last one ofthe Wedgwood saucer, was done with Maroger medium using the ‘painting into the soup’ method. I love this way of painting. Combining that technique with the smoothness of gesso gives a level of control which my meagre skills don’t justify. But I’m learning.

It seems to me that a lot of the effect of a painting comes from exploiting the available range of various factors – light and dark, warm and cool, opaque and translucent, lost and found edges, high and low chroma, and texture and smoothness. The gesso ground greatly increased the use I could make of the contrast between texture and smoothness, because when I wanted smooth, especially in the shadows, I could get very, very smooth.

All the shadow areas of the cloth were rubbed in with my thumb. It just started happening as I was painting, and it gave those areas a softness which I could never normally achieve with a brush, unless, I suppose, I spent a long time with a fan brush. I haven’t got any of those, and thumbs are quicker. The Maroger has some lead in it, so it might not be the most healthy of painting methods, but as long as you don’t suck your thumb compulsively, I think it’s probably ok. Note to self – stop smoking whilst painting with thumbs.

In contrast to these smoothly blended areas, much of the peppers, the areas of them in light, were left with no blending at all, and less blending was done on the areas of the cloth in full light at the bottom. I think it helps to differentiate those areas, and also is consistent with the way we see – more detail is observable on objects in light. It also gives a nice variation to the surface of the painting.

Of course, no technique, no product can take the place of practice and experience – of knowing how to paint – but I do think that we owe it to ourselves to use the best materials we can possibly find, even if we can’t really afford them. That’s what I do. I use Michael Harding’s oil paint, which, though pricey compared to high street oils like Windsor and Newton or Rowney, is beautiful to work with.

I use the best brushes I know of, which I get from Cornelissen, and pure gum turpentine, also from Cornelissen – not that distilled Windsor and Newton stuff. Apart from the paint, I’ve found that quality materials are rarely much more expensive than their hobby quality counterparts.

Acrylic gesso, although similar in price to the real gesso I used on this painting, is much easier to use. It dries in an hour, you can get your second coat on, and be painting the same day. I prepared a few panels at once with the traditional gesso I used for this one, and they took a few days and a certain amount of patience to do, but the quality of the finish is more than worth the extra effort.

I use MDF for my panels…ok, so the quality thing breaks down a bit there. But there’s a lot to said for MDF, despite it’s cheapness. It’s flat, smooth and dimensionally stable (meaning that it doesn’t warp – as long as the panels aren’t too big, in which case they need to be thick). It has to be sealed to protect it from moisture, and if you drop it the corners might crunch, but that’s about the only problem.

“Ah, but is it archival? Is it permanent?” you ask. I can’t answer that, nor can anyone else, since it hasn’t been around long enough. But linseed oil rots linen. So I’d venture to suggest that it’s at least as permanent as that.

Increasingly these days I find myself rabbiting on about technical stuff here. It’s perhaps not surprising, since I’m trying out a few different materials at the moment. These experiments, apart from being a lot of fun, are necessary I think. I want to learn to be a good craftsman. I intend to make a living from painting, and that means selling work. I owe it to my future customers to make sure that my paintings are well constructed, using sound techniques and the best materials.

I’m increasingly realising that the generally available materials are well short of the quality of the materials that painters routinely used a hundred years ago. The good stuff is still out there. There are still suppliers who take pride in what they do, but they take some hunting down and you’re unlikely to find them in your local art shop.

I’m not on some great crusade here, if you want to paint with cheap, low pigment paint on those weirdly textured oil painting boards you found in your local shop then that’s entirely up to you. I’d argue that you should at least try some good quality materials and take the time to learn how to make at least a few of your own supports, just to see what the difference is, but I wouldn’t argue that with you for very long. I’d rather be painting than arguing.

For me, it’s important. I’d like my little corner of the painting universe to be made out of the best stuff I can find. Apart from anything else, it makes a real difference to the work, make no mistake. I don’t have any vested interest in any of the stuff I link to. You’ll never see advertising of any kind on this site, that’s not what it’s about. But if I find something I think is good, I’ll point it out because, lets face it, learning to paint is hard enough without hobbling yourself with substandard materials.

I should apologise for boring you with all this, when there’s a painting to talked about. But I’ve gone on too long, and it’s late. I have to clean my brushes now and tomorrow, being Sunday, is thankfully another day at the easel. So this painting is going to have to stand up for itself without the usual blow by blow account. I guess that’s what a painting has to do anyway.

So here it is, a painting ofsome dried peppers in a little Chinese bowl with some dried berries on a white cloth. I hope you like it.