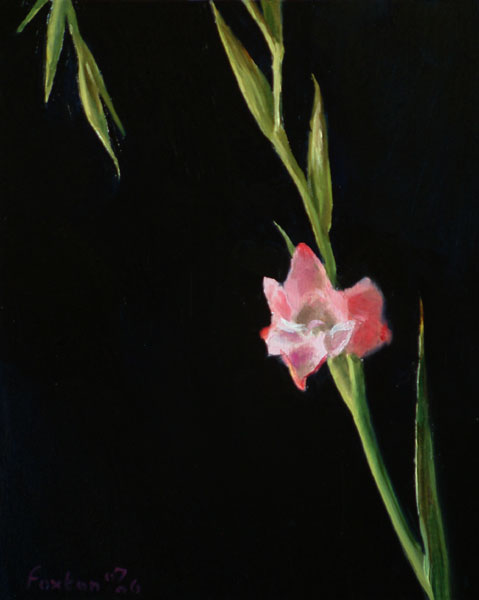 This is the eighth painting in the ‘ten flower paintings’ series.

After the last one, theChrysanthemums, ran into troublewith the background, I simplified this one by returning to a very dark background, enabling me toconcentrate just on the flower itself.

I returned to my method of painting by laying in colour notes, something like the right tone and position,and built up the painting gradually without any drawing out. It’s a nice, slow, controlled way to build up a painting.I’ve also stuck to my recent addition of having a second primed panel next tothe painting, blu-tacked to the drawing board, on which I can try out all my colours before Iactually place them onto the main panel. It helps a lot. I get to try out thickness and consistency of thepaint, as well as mixing the paint with medium to see how it looks, before I actually commit to putting anythingon the painting. It means I can visually check my colours first, I find it a great help. It’s largely replacedthe colour checker now, although sometimes I use the two in tandem. 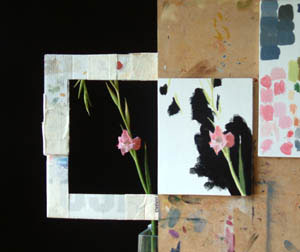 Here we are with the painting about half way through. Most of the main colour notes for the floweritself have been laid in at this stage, I started with the flower. I’ve just put in general colour notesfor some of the stem and leaves too, without any modelling yet. I’m just looking for a general match in colourand tone.

I’ve also found it helpful to start laying in some of the background colour beside the colour notes so thatI can see how they’re going to work when the painting is finished. If I’d approached the background of theChrysanthemums like this, I probably would have got the painting finished. 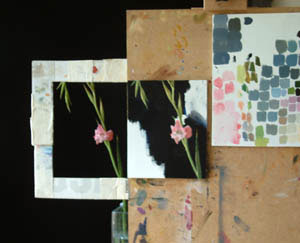 A bit further through now, and I’ve done a lot of the modelling on the stem and leaves. I have a pretty goodidea by this point how the painting is going to look when it’s finished.

One thing I’ve noticed with these flower paintings is that I’ve all but stopped using medium now. Thatwasn’t a conscious decision, it just happened. I first noticed it withYellow Rose Number Two. I got to the end of thepainting and noticed that the little blob of my home made, black oil based Maroger medium was still sittinguntouched on my palette. I think it’s partly because, when I’m painting a flower with a dark background like this,there aren’t really any large shadow planes which I can use my Rubensian warm glazed shadows on. It’s just becomeunnecessary.

Another thing that strikes me about this painting is the strong two-dimensional quality, the lack of depth.That’s largely a function of the very dark background I think, coupled with the lack of solid, rounded forms.Although I don’t mind it, and in some ways it’s quite nice, I think I might be giving myself too easy a time ofit. I don’t want to produce flat, two dimensional paintings, I want to create a feeling of real space and light,and these dark backgrounds work against that. In fact, if I look back at the last eight paintings of this series,the ones which worked best are the ones where I’ve used a very dark background. The ones with lighter backgroundshaven’t come out so well I don’t think.

So for the last two of this series, I think I’m gong to see if I can paint the flowers in a real threedimensional space, with something more than just a flat background to set them off. That will probably mean moretime consuming paintings, and less time spent on the flowers themselves, since it will probably mean includingthe vase the flowers are in. But since I thinkI’m doing ok with the colour notes, it’s certainly worth a try for the last two. Ihave some absolutely stunning large purple gladioli for the next painting, so I’m going to do those with thevase in too I think. We’ll see what happens. A right mess, probably.