In the last post of this series, I’d set up the easel (and then drivelled on at some length as usual),put in my central line and madethe first few marks, establishing the main points of the head along the centre line. Now I can start to establish the size andoverall shape of the head.

The first stage in this process is to find the overall width, marking the sides of the head in relation to the centreline. I do this by eye initially and I think it’s good practice to do so. Judging as much as you can by eye from this point onhelps to stretch yourability to judge distances accurately. Once the mark is made, you can always double check and adjust accordingly.

The next picture shows the first attempt at placing the furthest left line of the head. This is judged in relation to thecentre line: 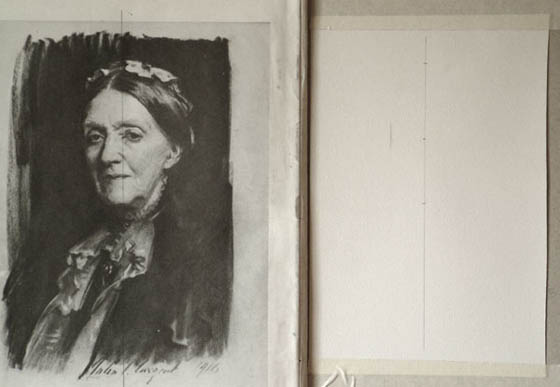 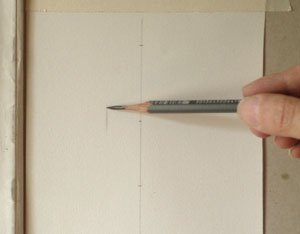 Now I’m starting to draw, it’s worth saying something about my position in relation to the easel and use of the pencil. Ingeneral, I think it’s important to stand as far back as you can from the drawing, especially at this stage. The farther back you are, theeasier it is to judge distances and also to guage the overall effect. I’m standing with my arm out in front of me, relaxed butalmost fully extended.

In the beginning stages I generally use a light, hard pencil. This is a 3H graphite pencil, sharpened to a fine point witha knife and sand paper. I hold the pencil towardsthe opposite end of the business end, which allows for much more freedom. It also enables lighter drawing, with only the lightestpressure on the paper. Drawing from the wrist like this makes it much easier to make consistent lines. If I need a bit morestability I rest my hand lightly on the drawing board. Another advantage of this is that your hand obscures as little of thepaper as possible.

With the left-most width established, next I need to find the right most point of the head. In this drawing, I’ve decided tostart by finding the distance from thecentre line to the point where her hair meets her ear, the right most part of the cheek-bone. Ordinarily, I’d try to establish theouter outline first, but in this drawing the outline of the head often vanishes into shadow. The outline of the face is more clearly statedso will be easier to judge.

To illustrate the Harold Speed ‘scaffolding’ approach more clearly, I’m going to start by finding the height of that pointin relation to the corner of the eye on the centre line. This is quite a small distance to estimate, and therefore easier,and by relating this new point to what I already have I’ll be able to get it much more easily and more accurately. The importance of havingthose first three points placed accurately should be becoming clearer now. If the position of the corner of the eye was wrong, so would thisnew point be. First, on theoriginal drawing, I draw a horizontal line from the point I’ve chosen to the centre line: 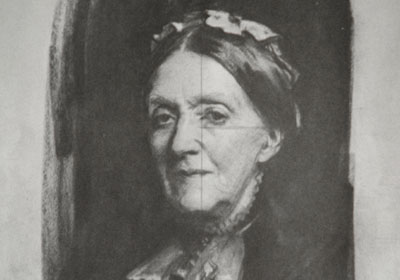 Already I think you can see the advantage of this scaffolding approach. I’m trying to think only in terms of two dimensions atthis point in the drawing, just trying to make sure my judgements of the distances between points, and the shapes that they create,are as accurate as possible.

Looking at the drawing now, I can clearly see the triangle formed by the centre line, the horizontal line I’ve just drawn in, andthe line of her hair down her forehead on the right. Already it’s becoming easier to see the drawing in two dimensions,as a collection of shapes rather than as a head. The accuracy of my block-in will be helped considerably by this.

What I’m doing here, by drawing in the horizontal line, is breaking a complex judgement of distance and shape into smaller, moremanageable parts. The horizontal line has given me the height of the point I’m looking for in relation to the points I’ve alreadyplaced. The next job is to place a similar line on my drawing: 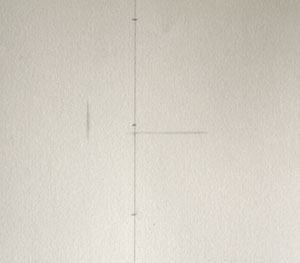 Now I’ve established the height of that point, I need to find the distance from the centre line. Having a horizontal line to sightalong will make that job much easier. As before, I’ll do it first by eye and then check my accuracy. Were this a portrait of a live model,I could use much the same process, except of course that I’d have to either imagine that horizontal line or hold out my pencil in frontof me to recreate it.

Certainly, it’s much easier to do it like this, copying a flat subject like a drawing. But the principle isthe same and this is a good way, I think, to establish the basic skill. The best way to learn any skill is to practice it repeatedly.Simple right? Everybody knows that. But there are very real reasons for it. As well as mapping the functions of the various areas of the brain,neuroscience has also found that repeatedly practicing somethingactually results in physical changes in areas of the brain. Pathways in the brain are formed by habit, and the more often they’retrod the wider and more easy to follow they become. Once established they’re tough to break. Ask any smoker. Ask me, I’m cutting down.As Aristotle said,“You are what you repeatedly do. Excellence is not an event, it is a habit.”

My own practice has certainly borne that out. The more I draw, the better I become at judging distances and shapes. There’s no great mystery aboutit, it just takes practice. These days we know more about why that is, especially in relation to the physical make-up of our brains. So if youhave trouble with something like judging distances and shapes, it might be an idea to set up a simple, repeatable exercise and do it for afew minutes every day. You’ll get better, simple as that.

Back to the drawing. The next couple of pictures should be fairly self explanatory. I’ve judged the distance by eye, checked it by measuring,realised I’ve got it wrong (too small) and had to adjust it accordingly: 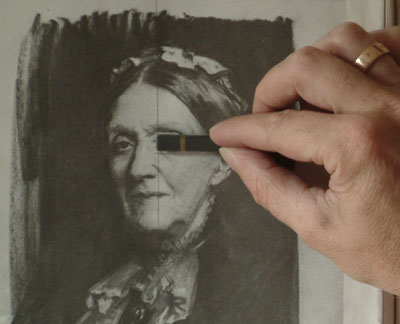 I’m sighting along the bottom edge of the pencil here, lining it up with the horizontal line I drew, and marking the distance along itof the point I’m looking for with my thumbnail. 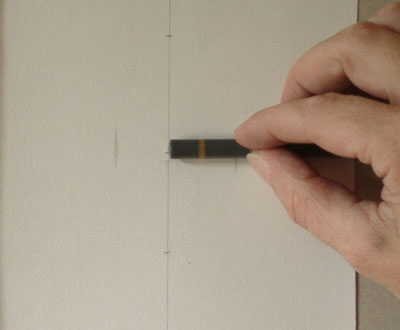 My first attempt, visible just underneath the pencil, is well short. Just as well I checked.

From Point to Shape

Now I need to start joining the dots to create the overall shape of the head. Since that triangular shape of the top right quarter of thehead has already jumped out at me as a strong shape, I’m going to start there.

First I establish the point at which Lady Spencer’s hair line crosses the centre line. A line has to start somewhere and it has toend somewhere. It’s much easier to reach your destination if you know where you’re headed. With that point in to guide me, I want toestablish the angle of the hair line.

A method I’ve found quite helpful in judging angles is to practice them first. Since I’m copying a flat drawing, I can practice rightover the drawing. Holding my pencil at the end, I practice going up and down the line on the drawing: 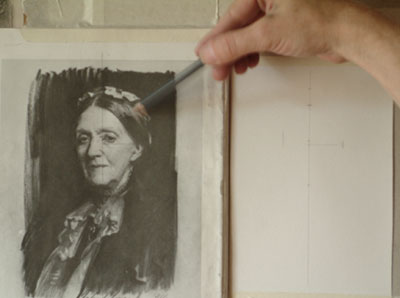 You can use this method when drawing from life too. Working sight size makes it particularly effective, since the line you’re about to drawis the same size as the stroke you’re practicing.

Our friend Aristotle’s advice is pertinent here too. I’m looking to get that stroke fixed in my mind before I go to put it on thepaper. Try it, I think you’ll find it makes a difference.

Once I think I’ve got the angle fixed in my brain, I transfer it to the drawing: 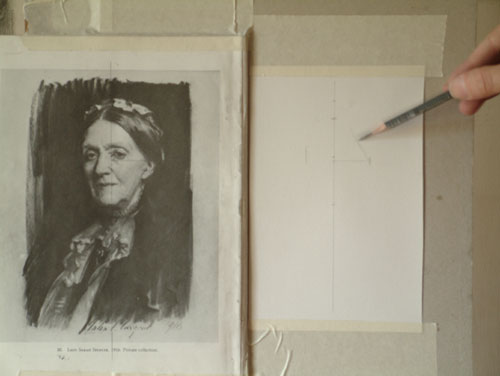 Establishing the main shape of the face is now largely a case of doing the same for the rest of the main lines which form it. Because I knowthat my initial points were fairly accurate, I can lay in the rest of the shape with a fair amount of confidence. After a little more work, I’vereached this stage: 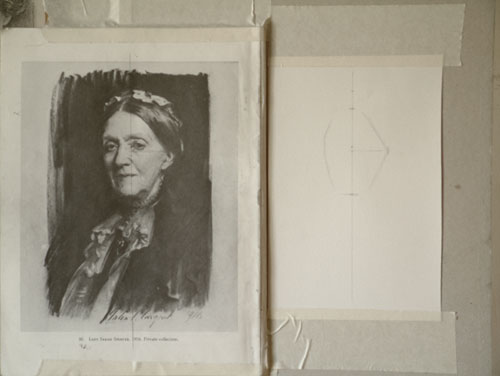 So far so good. Now I want to build out from the face and finish the overall shape of the head. As I said earlier, I’ve chosento start by establishing theface and building outwards in this drawing because the edges of the head are quite vague, with the outline often disappearing intoshadow. That makes for a lovely drawing, but also makes it hard to find points to relate to. The face, however, being pale against adark background, has given me very clear points to work to and made the job of blocking in the main shapes much easier.

Next, I want to draw in the curve of the top of the head. As I’ve done thus far, I’ll be reducing the shapes to straight-ish lines,the kind of lines that my hand can make easily. Reducing curves to straight lines and angles makes them much easier to judge.

A line has to start somewhere and it has to end somewhere. It’s much easier to draw between two points than it is towing it. I’ve already got the top of the head where it crosses the centre line marked, it was the first point I marked. Looking along the lineof the top of the head to the right, the first clear point is the sharp point formed by her hat – or bonnet or whatever that is – before itcurves round to the back of her head. 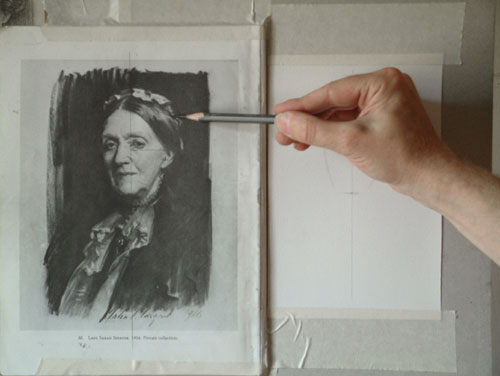 Since I have more of the drawing established now, I don’t need to measure how far away that point is from the centre line. I can see that itlines up roughly vertically with the inside of her ear. I can check it with my pencil over the drawing, as above. In this picture, my pencilis mid-way between the inside of her ear and the point I’m looking for, drawing the vertical guide-line that connects them. Then Ireplicate it on the drawing: 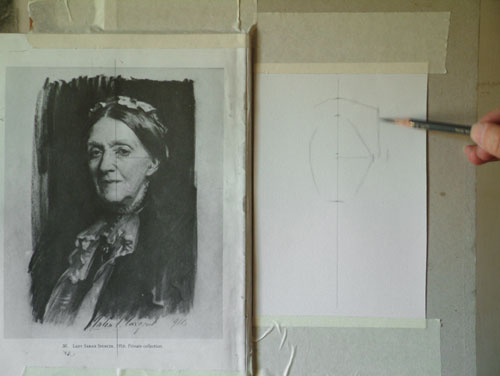 With a combination of practicing the angle, finding the horizontal distance from the centre line, and double checking the height, I canestablish that point without much recourse to measuring. From here on, most parts of the drawing can be judged in relation to parts thatare already there. As long as the first points were fairly accurate, I shouldn’t go too far wrong. The drawing goes a lot faster at thisstage, after a fairly laborious start. 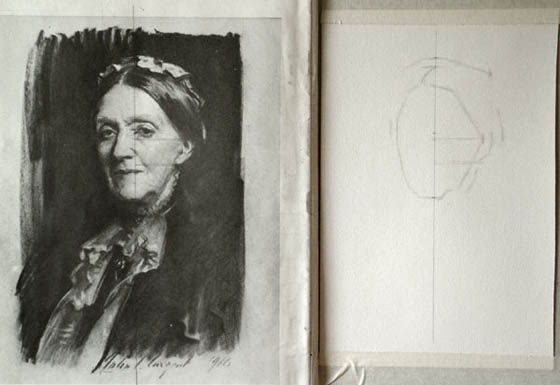 Here we are at the end of this stage. The overall shape of the head is laid in, and I think it’s pretty accurate. I’ve used thescaffolding approach again to find the bottom of the ear, and added a few more lines, where I can see them, to round out theshape. As I go on to the next stage I’ll need to make plenty of corrections, but this careful, slow start is going to make the next stages mucheasier and keep me from getting things too out of whack.

The next stage is where it starts to get more interesting as I start to think in three dimensions and build the forms. In some cases,literally.

This exercise is posted in four parts:

1. Setting up and establishing the main points

2. (this post) Judging Distances and Laying in the Main Shapes