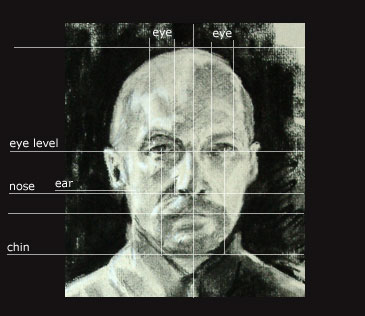 Common proportions of the head used for laying out a portrait

I’ve just been reading chapter 10 of Drawing on the Right Side of the Brain, where author Betty Edwards gets her students to draw their first self portrait. I must admit I haven’t been following every exercise in the book, but have followed a roughly parallel course and some of the exercises I’ve done.

Chapter 10 devotes a lot of space to determining the proportions of the head, drawing attention to a few which are generally common to all faces, and need to be right in a portrait:

Interesting stuff. Since today’s self portrait was pretty carefully measured and also pretty much frontal, I’ve tested my measurements against these.

Now some of the above measurements I did take: eye line, nose length, mouth, head width to ears etc. But I didn’t take any eye width or nose width measurements. It appears I got the eye widths, or their placement, a bit wrong. I got the ears way too small, the base of the ears should be lining up somewhere between the nose and the mouth. And speaking of the mouth, I’ve got it too narrow.

Now this is really interesting. Everything else pretty much agrees with Betty’s proportions, which I guess is good news – I’ll have to pay special attention to eye widths and the length of the nose in future, and to the size of ears.

Of course all this, (at least a lot of it), goes out of the window when the sitter is three quarters. But the book still has some proportions for that, and a ‘recommended order’ for laying out a three quarter face. A ‘recommended order’ of drawing something rubs me right up the wrong way to be frank, but I’ve just read it and it makes sense. I plan to try it out tomorrow, but my plans have a habit of going astray on the day.

I should point out that I’m blessed with a coggly face. With my head straight on most of my nose is off to the left, in a mirror. To compensate for that in this drawing, and to get my nose running down the middle for measuring purposes, I slightly moved my head into a three quarter.

They do say that perfectly symmetrical faces are especially beautiful. That’s me buggered then.

Related posts on this site:

Previous post on Loomis and the Planes of the head.