These pictures were taken with a digital camera from a contact sheet of the last mural I did, about eight years ago I think (as of time of writing this, 2005).

They’re out of focus because the original images are only an inch and a half across. Thankfully the camera has a macro feature. I still have the negs, so I’ll have to get some proper prints done. But apologies for the poor quality of the images. 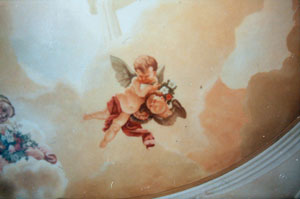 This mural was done for a property developer who lived out in the countryside near Leicester in a big old Edwardian house. He liked the heavy baronial look, his designer liked the lighter Edwardian style (which was right for his house to be fair). I did the mural in a Rococo style which I’m not sure suited either, but I think they were happy. Basically I wanted to do a large scale Tiepolo style ceiling painting as my parting shot. 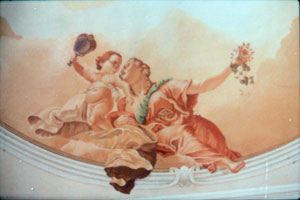 The mural was done on the ceiling of the spare bedroom, about 100 square meters I think. Again I got the job through street art, picked up in Leicester this time. I charged £5,000 for the job, but unlike commercial jobs there was no deadline or penalty clause, and I ran right over and didn’t make that much on it. I was pleased with it when it was done though, I knew at that point that it was going to be the last one, at least for a while. 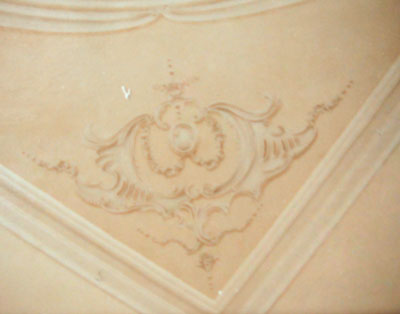 The design was based around a central circle of tromp-l’oeil plaster mouldings, with rococo mouldings painted in each corner. The room was lit by three large windows on one side, so painting the mouldings as if lit from the window made them very convincing, in daylight at least. Although I painted the mural in acrylics, the paint was used pretty thin and the final effect was more like a fresco. The designer wanted to keep the feel very light since the room was going to painted in very light colours. I never saw the room finished, with the furniture in place. It must have looked quite grand. 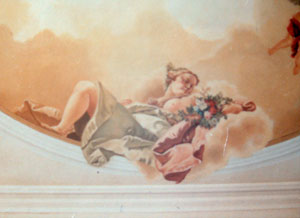 The figures are copied from Tiepolo, with a few adjustments. Giambattista Tiepolo was the last of the great Venetian Baroque painters, I love his work. I first came accross him trawling public library books for paintings to copy on the street. I was drawn to Tiepolo’s paintings because of the bright colours, they stand out brilliantly in a grey high street, pull crowds over.

About a month ago (September 2005) I went to Venice with Michelle and I saw some of his frescos and oils first hand. What an experience. That trip was instrumental in me finally making the decision to get back into painting.

I remember sitting in the Scuola Grande Dei Carmini, a building which used to house one of Venice’s Scuolas (Venetian School of Devotion) off the Campo di Santa Margherita, looking up at these incredible oil paintings and feeling this strong conviction that I should stop pissing about and get painting as soon as I got home.

That’s how my return to art – and this site – started.