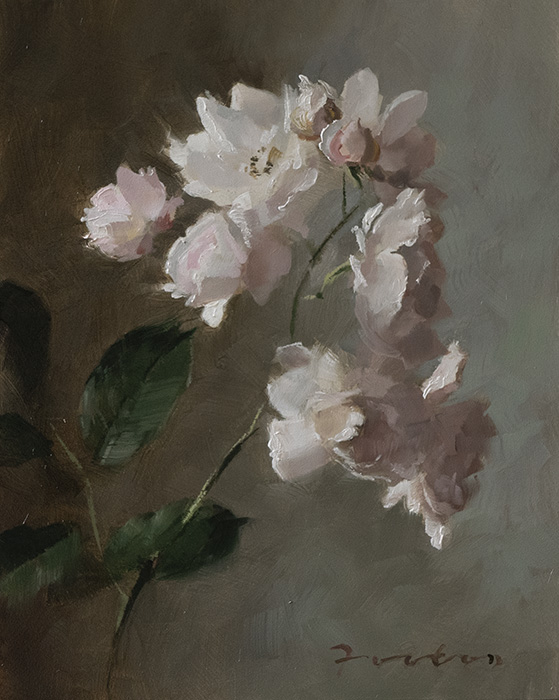 I was in a real quandry.

I had a beautiful spray of roses that I’d just snipped from the bush in the garden (Paddy’s roses again) but beautiful as they were, they were already beginning to fade.

The pause before beginning of a painting is always fraught for me.

Will there be time to paint the flowers before they die?

Is the subject too complicated for me to manage?

What if I really mess this one up by trying to reach too far?

That pregnant, fraught moment of <em>just about to begin</em> is filled for me with questions, even anxiety.

Sometimes, the only thing that makes me start is the awareness that I’ve been procrastinating for too long.

The day will waste. Nothing will get painted.

So that’s what I ended up deciding to do.

But I had an idea, too, a half-formed one, that if I tried a value study with just a little colour, I might make something interesting.

So I began as usual: Cover the panel with linseed oil. Paint in a neutral tone. Wipe off. Start looking for the value balance.

As I worked into the painting, focus grew. I fell in love with the composition. At some point, I started to introduce a little colour.

I think now that it was in the shadow of the rose on the bottom right. I’m sure it was.

And without really thinking about it too consciously, I began introducing a little colour into the lights too.

I had no Munsell chips for this session – after all, it was mostly supposed to be a value study.

But perhaps because I’d just painted some roses from the same bush, the colour came in quickly, and more subtly than I expected.

I didn’t match anything, I mixed on the fly – which is not my usual approach as you probably know!

But I realised gradually, about half way through the first session that I was painting more freely than usual. Somehow the form was still beginning to show, but the brush marks were almost appearing by themselves.

People call it being in the zone. Flow. Perhaps even being inspired.

And when I hear any of those words I’m wary.

Because I know that the most important thing in any art form is the development of skill, painting is no different.

That’s how you make progress. It’s something I’ve proved to myself time and again. Practice is what counts.

But there are also those rare moments, sometimes, when it feels like I imagine flying must feel.

In the garden I watch the pidgeons dipping up and down through the trees, and the crows sliding across the edge of the wind on blustery days. They don’t seem to think too much about where they’re going. They’re just flying.

Sometimes, things seem to come together and work almost of their own accord.

There’s a feeling of lightness and energy.

And surely that’s a good thing?

Well, this is why I’m wary of talking about experiences like this: Because I strongly believe that moments like that can only happen after a lot of practice.

And I do believe that there’s a mistaken but common belief in painting that you should just paint, feel the moment, go with your emotions, paint boldly.

Because that’s how good painitngs are made.

If my experience counts for anything, that’s the opposite of how good paintings are made.

And even then it can only happen when fertile ground has been prepared first – through the careful development of skill through practice.

I know many people won’t agree with me on this, and that’s fine.

But for me, these rare moments are what the practice is for. So that when something does happen on that rare day, you have just enough basic skill to wing it and get away with it and not to think too much about where it’s going.

So that when the unexpected hits, you can go with it and fly without – hopefully – crashing straight into a tree.

Even whilst I was working on this one, I was pretty sure I was going to hate it the next day.

Thankfully, this time, I didn’t.

I worked a second session on it today in a much quieter frame of mind, pulled some of it back in, but hopefully not too much.

So here is an unexpected painting of roses.