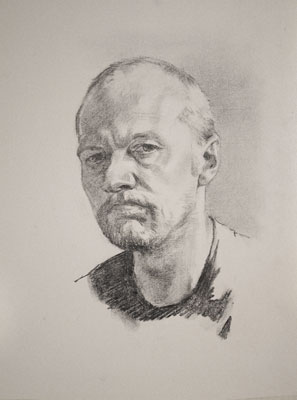 After producing two diabolical self portrait drawings (not posted yet, will be up when I can bear tolook at them again) just prior to this one,I was determined to takemy time, and at least make sure that I got things in as near to their correct position as I could.

That meant a much longer drawing, this one took a little over 12 hours.

I took my cue from theBargue ears fromplate 4.It struck me whilst I was working on one of those ears, that if it takes metwo hours to copy a small ear, and five hours to copy a big one, then I’d better take a bitlonger if I want to produce a near accurate drawing of a whole head from life. Obvious, really.

I have a strong tendency to rush. I think it goes back to my art college days, whenaccuracy seemed less important than it does to me now. Repeatedly, I’ve had to tell myself to slow downto a pace at which I can produce half-way decent drawings. Repeatedly, I forget to do it, and every timeI do my work suffers accordingly.

So I approached this one with the intention of spending two 6 hours sessions on it, which,funnily enough, is exactly what I did. I also decided at the start of the drawing that if I got nofurther in those two sessions than simply laying out the drawing, that would be enough – as longas it was accurate.

Although I proceeded with this drawing pretty much as if it was a Bargue drawing – laying out firstwith careful measuring, working from the general to the specific, all that good stuff – itwas measured out using relative measuring, not sight size. Working sight-size in a mirror will producea head about two inches high on the paper, unless the drawing board is right next to the mirror. Actually,that gives me an idea. I think I’ll try that for my next self portrait.

Anyway, back to the drawing. Since I took a while over this one, I had the chance to take a few ‘workin progress’ shots as I went along. 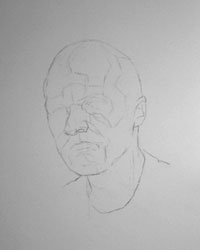 Here we are, somewhere through day one. I’ve tried to concentrate as much as possible onthe planes of my head, the topography, if you like. I haven’t drawn what I saw, or at least, I’vebeen very selective about what I emphasised and what I left out.

What this stage shows is a combination of the rough planes of the head, plus notes for where themain shadows lie. Often, the two coincide, but sometimes they don’t. I made a point of trying not to drawfeatures, but tried to draw the forms around them instead.

The measuring out which got me to this stage was done like a Bargue drawing. First I marked thehighest, lowest, furthest right and furthest left points. Then I measured and marked a few moresalient points on the outline, joined the dots, and proceeded to the inner shapes. I also had myplumb line falling down the centre of my face, hanging against the surface of the mirror. That made themeasuring stage much easier, since all points were related to that. You can still vaguely see the centreline running down the drawing here, crossing at the corner of my eye on the right. 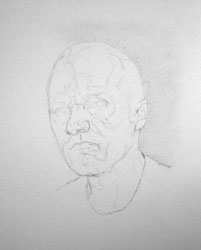 Here we are at the end of the first six hour session. I look like ‘the thing’ out of the Fantastic Four.All I’ve really done is refine the drawing into smaller and smaller forms. I put in a suggestionof a background tone mainly to break the fear of adding tone. I knew I was going to be starting with toneon the next day, I thought it might help if I had at least a bit on there already. 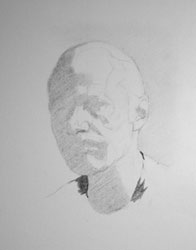 A couple of hours into day two now, and the first tone has gone on. I started this session by refining someof the laying out first. It’s good to come back to something the second day, you see lots of mistakes you missedthe day before. It also gave me a chance to warm up before I added the main tone block.

That was pretty scary, I don’t mind admitting. After having worked on the drawing for around eight hours,I had to accept that there was every likelihood that I was going to destroy all my careful work. But ithad to be done. It also simplified the drawing, it had been getting a bit busy. Getting that big tone blockfilled in enabled me to get out of detail mode and back into holistic mode I think, something I definitelyneeded at this stage.

The two dark patches on the T-shirt were mainly to remind me how dark I wanted to go for my darks. I didn’twant another hesitant, pasty faced drawing. 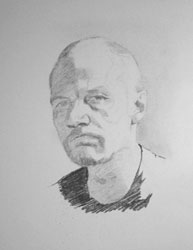 A bit further through day two, the drawing is starting to take shape a bit more. I must be honest, I wasn’treally following a plan here. I was just picking out darker accents as I saw them. From here to completionwas mostly fiddling. Quite enjoyable fiddling though.

One thing that strikes me about this drawing is that I look fairly relaxed. I wasn’t concentrating ontrying to produce any particular expression, I never do, but often I look angry in my self portraits.That’s mainly because I find them such a struggle, and am often frustrated whilst I’m working, resulting ina frown of concentration while I try to figure out where I’ve screwed up. Taking longer over thisone that made me more relaxed I think.

So, is it a good likeness? I think it’s hard to judge likeness on a self portrait, because you often seeyourself differently than other people do. But that said, I think it’s not bad, maybe a 6 out of 10. I can stillsee inaccuracies, the chin area bothers me a bit since it’s not well defined. And of course the finish isn’tgood, it’s not a very neat drawing.

But I’m not concerned about finish, for two reasons. Firstly, I thinkthat finish is something that should be only be considered once the basics of drawing are well established, and I’mnot there yet. I see a lot of work by people who are learning where they’ve spent lots of time on producing abeautifully smooth finish without concentrating enough on the basics of the piece – getting the forms right, gettingthe relationships between the values right. I can’t help thinking that they would progress faster if they spent moretime on basic drawing practice first. And secondly, I’m not really that bothered about finish anyway. I’m surethat’s bad, and in ‘earning a living’ terms, it’s something I’ll have to address at some point. But it matters muchmore to me that the drawing has life, particularly at this early stage.

I’m quite happy with this drawing. There’s still much work to do, but it shows some improvement. It proves tome that practice pays off, (I’m drawing about four to five hours a day now,) and that I need to be patient andwork slowly. I believe more than ever that throughconstant daily practice, my goals will become achievable. That’s heartening, because I’ve been having a crisisof confidence over the last couple of weeks, and this drawing has pulled me out of it somewhat.